With the first pro-public education General Assembly majority in a generation, educators are stepping up advocacy for their students and their jobs. 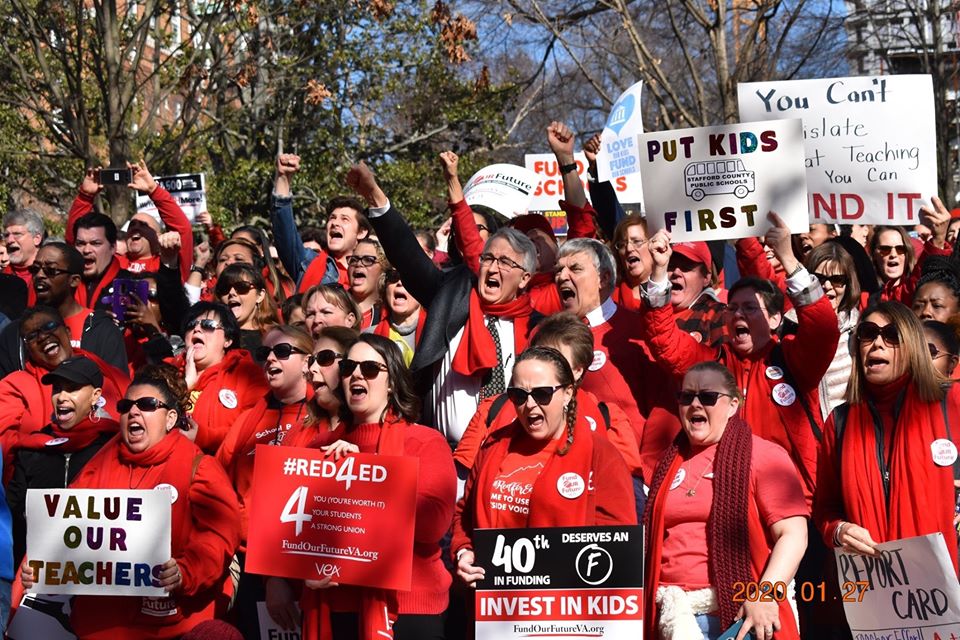 Thousands of educators from across Virginia stood up on Monday to exercising their choice to join a union. In front of the Capitol building in Richmond, they lobbied their legislators to fund their public schools, fight for increased pay, and support their freedom to collectively bargain.

After decades of draconian laws forcing teachers out of the profession, educators in Virginia now enjoy a pro-public education majority in the General Assembly for the first time in a generation. Now, they see an opportunity to support and enact collective bargaining legislation, giving educators a voice in their workplace, helping to ensure fair compensation and benefits, and enhanced conditions for student learning.

“I’m going to stand with my union brothers and sisters to call upon the General Assembly to finally give us collective bargaining rights,” said Brian Teucke, Gloucester Education Association President prior to attending the rally. “We know once that happens, our educators will have better working conditions, and our students will have better learning conditions."

Just last year, educators were marching to Richmond to advocate for increased wages. Despite being the 12th wealthiest state in the country, Virginia ranks 32nd in teacher pay, 40th in state funding per pupil, and only received a 5 percent increase, still thousands less annually than the national average. They said to their legislators then, “November is coming,” and on election day voted in a huge majority of pro-public education supporters in both the House and Senate, including two Virginia Education Association members.

Now, educators in Virginia are building on national momentum to advocate for their students, their schools, and their jobs. With VEA proposed legislation in hand, VEA member and classroom teacher Schuyler VanValkenburg oversaw updates to the standards of quality for Virginia’s public schools, from increasing the ratio of support professionals per student to adding funding for prevention programs and educator salaries.

On a national stage, where publiv approval of union membership is currently at a 50-year high, Virginia’s own Representative Bobby Scott introduced legislation in the House of Representatives, identical to Senator Patty Murray’s (D-WA) bill in the Senate, which would amend the National Labor Relations Act, the law originally designed to legalize collective bargaining and unionizing, but did not fully protect public employees, such as educators, in their choice to strike. This legislation stands firmly against attacks by the Trump Administration to strip public employees of their choice to join a union or collectively bargain.

This legislation would directly impact Virginia’s educators and unions, who are facing massive teacher shortages. Over 850 classrooms are without a full time teacher, but the number is hard to confirm because of the increasing number of substitutes in classrooms.

“In speaking with our human resources department, they’re finding it more and more difficult to fill, not just our most needed positions and categories of employees but elementary teachers. And bus drivers are a huge problem across the board,” said Virginia Beach Education Association President Kelly Walker. Bus drivers are part of her local union’s education support professional pool, however, there are few members because their $10/hour wage is too low to afford dues. Additionally, Walker says, with an increasing number of students arriving in classrooms each day with trauma-based issues, funding to recruit and retain school nurses and guidance counselors is slim.

Walker, who has been advocating for the freedom to collectively bargain since she began teaching while raising two young children of her own, said that in order to attract and retain more educators, they need to see more than wage increases, but also increases in respect.

“I can just say from Virginia Beach for example, we have many educators who don’t even have a 30-minute unencumbered lunch. It’s more than just the lack of pay and lack of respect that we have. It’s the little things that add up to what the work environment is for our workers, for the employees, for the teacher let alone what that does to our students and our communities,” said Walker.

Educators in Virginia have continuously faced trying work conditions, legislation that threatens educators’ licenses, and took away public sector collective bargaining rights, forcing educators like Walker to pick up second and third jobs throughout their careers.

Collective bargaining, says Walker, helps educators focus on their students, and provides opportunities for a healthy community all around. Alongside Virginia, other states are also pushing forward legislation tied to collective bargaining, leading to negotiations over lower class sizes, extra student resources, and increased school health and safety measures.

“It’s imperative that we at this point in time really allow educators to have a seat at the table because if we don’t, with the teacher shortage and the lack of people going into our profession I just fear that we’ll not be able to continue the great work we do in public schools,” said Walker.

With pro-public education allies across Virginia’s General Assembly, Delegate Elizabeth Guzman and Senator Jennifer Boysko are giving educators and other public sector employees the seats they deserve. House Bill 582 and Senate Bill 1022, if passed, will allow members in unions in this public sector environment to collectively bargain their contracts. Virginians worked hard to elect legislators who are willing to support their students, and look forward to continuing the mission through the November elections.

“If we don’t elect education-friendly and have our members run for office and make sure that we have the ear of those in office to share what’s important to public education then we’ll lose the power,” said Walker. “We’re smart, we’re powerful, we gain a lot of respect in the community and so if we don’t continue to back candidates that walk the walk and talk the talk, we’re not going to be able to continue and have the power that we need to fix our schools and our situations.”