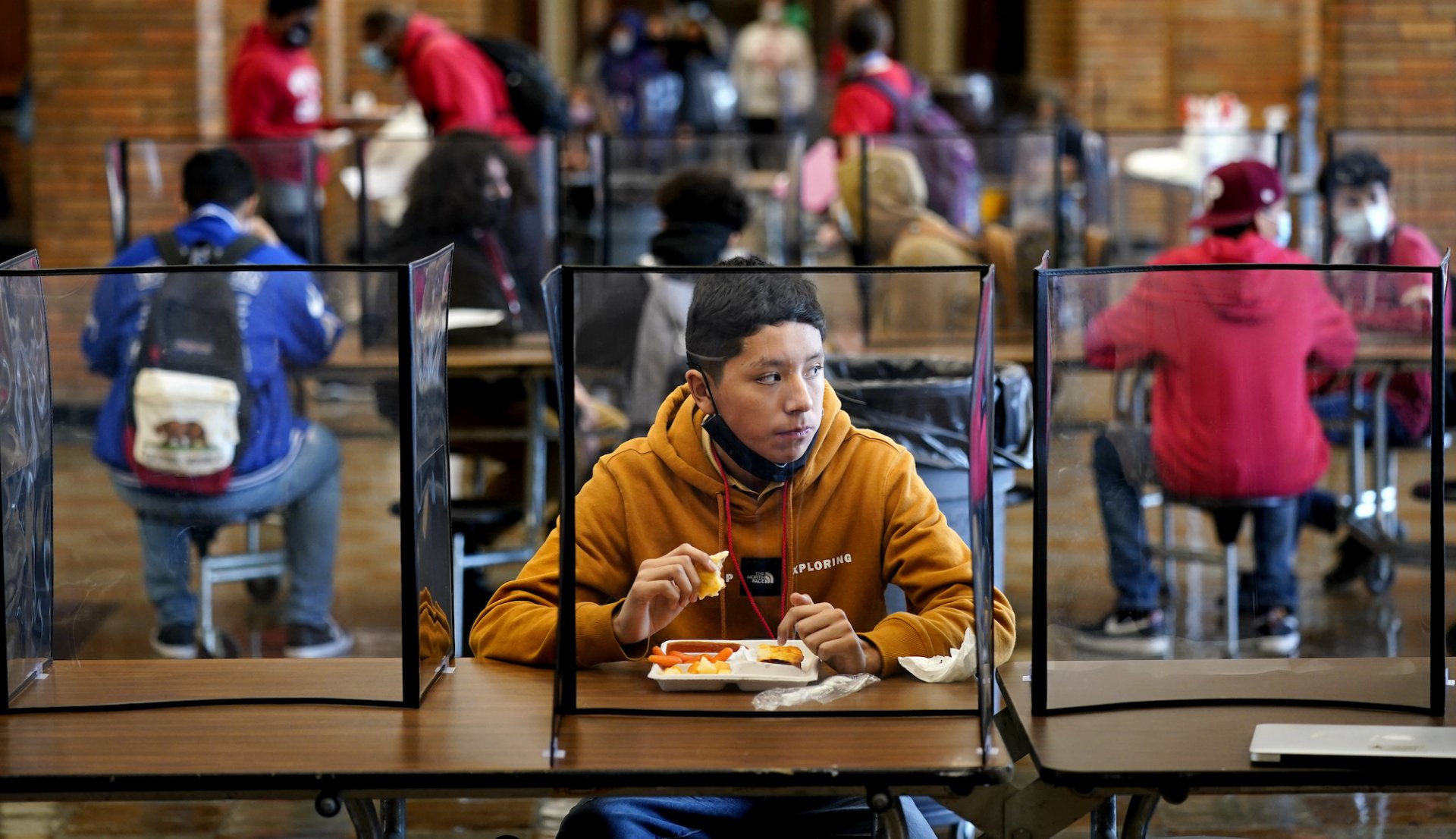 When “Breakfast for Lunch” is on the menu, it’s a big deal for students in the Colonial School District in New Castle, Delaware. But this week, the planned French toast sticks had to be replaced with waffles, and pork sausages for chicken sausages.

“The kids really love the chicken sausages we usually serve and some have dietary restrictions when it comes to pork products,” says Susan Jones, a lead food service worker at William Penn High School.

“At least we still had hash browns, or we may have had a riot on our hands,” she jokes.

But Jones says the daily food shortages and substitutions the cafeteria staff has to handle this year is no laughing matter. One day there were no carrots delivered, another no apple slices, and on another no Brussels sprouts. They had to substitute broccoli and cauliflower, which are healthy but cause problems with meal planning.

When the district’s food services manager puts orders in for lunch items, Jones says their distributors don’t have half of what’s requested.

In Alexander City, Alabama, the district asked parents and caregivers in a Facebook post to begin feeding their children breakfast or sending them to school with snacks due to food supply shortages.

"If possible, we ask that you feed your student breakfast prior to school or try to send a snack. Some of you have noticed our menus have not been updated regularly. When supplies do arrive, we do not always receive what we have requested; therefore altering the menus. This is a situation that is frustrating for you as a parent, and for us as well as our ability to feed our students is being greatly impacted," the post said.

Officials said they were working with Southern Food Services to help alleviate some of the strain and broaden their Child Nutrition Program.

In September, Dothan City Schools in southeastern Alabama, asked parents to prepare for the possibility of remote learning due to food supply issues.

"As a last resort, we may also ask that you prepare to have virtual/remote school days a few days out of the week to alleviate the stress of our food supplies," Superintendent Dennis Coe wrote in a September 23 Facebook post.

To deal with the food shortages in her Alabama district, Cacyce Davis, who directs nutrition for schools in Elmore County, has made last-minute grocery runs to Sam's Club when deliveries didn’t arrive.

"This is a quick solution…but it is not a solution to the problem," she told CBS news. "It appears that there are cracks at all points in the supply chain."

To deal with the shortage, the district set up a makeshift warehouse to store supplies and staff had to learn how to work with pallet jacks and lifts. They work longer hours, storing, packing and delivering food to schools that didn't receive their scheduled delivery.

"We're going to do the best we can to keep serving," Davis said.

According to a School Nutrition Association survey of school meal program directors, 97 percent have concerns about supply chain disruptions and 65 percent view disruptions as a serious concern. Cafeteria staff is also in very short supply, a major worry of 90 percent of respondents.

In Delaware, Jones worries about that, too.

“Our biggest issue right now is food staff shortages,” she says. “We need to rely on substitutes, and they’re just not out there so we’re walking into the kitchen short-handed on a regular basis.”

It’s all a result of a confluence of events hitting food distributors and manufacturers, according to a New York Times report on the school food shortages. With national labor shortages, exacerbated by the pandemic, there aren’t enough people driving trucks, staffing warehouses, or working on assembly lines. And not enough people working in school cafeterias.

In her district and across Delaware, Jones says they are advertising heavily for cafeteria subs, but there aren’t enough to fill the spots.

“It’s hard work as a sub, it’s busy, it’s intense when you haven’t worked in a kitchen before, and it’s hot, especially with masks on,” she says. “But with or without subs, we still have to feed those kids in the same amount of time. If someone isn’t there, we all have to do more.”

That means everyone has to roll up their sleeves to help clean pots, prepare and serve meals, and also perform unexpected tasks resulting from the shortages. One week they didn’t get their trays delivered, so Jones and her team had to cut clamshell containers in half to use for serving.

“When the menu changes, you have to execute preparation differently, and what some people don’t think about is how that impacts the dietician or the school nurse who will call to ask what the carb and calorie count is for the new meals,” Jones says. “All of that nutrition information is provided for students and families.”

Fortunately, Jones says they are still meeting nutrition requirements and can still offer hot food selections and staples like grilled cheese sandwiches, due in large part to the waivers issued by the U.S. Agriculture Department that gives schools more flexibility. On Sept. 15, the department issued a new waiver preventing school meal programs from being financially penalized if they fail to meet the guidelines because of supply-chain issues. It has also increased the rate it will reimburse schools for the cost of food products.

The waiver is a huge relief for school nutrition professionals across the country, says Beth Wallace, president of the School Nutrition Association.

“We have spent the last several months scrambling to secure foods and supplies for our students’ meals and re-working our menus when our orders have been canceled or deliveries delayed,” Wallace says. “We greatly appreciate USDA’s action to ensure schools can focus on serving students nutritious meals without worrying about losing federal reimbursements if they fail to complete production records or meet one of a multitude of meal pattern requirements.”

“Our biggest issue right now is food staff shortages. We need to rely on substitutes, and they’re just not out there so we’re walking into the kitchen short-handed on a regular basis.”

“High school students are more adaptable, but the younger kids want to know what they’ll be having for lunch. They might not like what winds up being served,” Wallace says. “They may have decided to bring their lunch that day if they’d known.”

More kids are carrying lunch boxes as shortages prompt more parents and caregivers to prepare lunches for their children so they know they’ll have a nutritious meal. That’s not an option for every student.  About 30 million public school students rely on school meals as their primary source of daily nutrition.

But even those who pack their own lunches face shortages of certain products in the supermarket aisles because of supply chain disruptions. Their families face higher prices, too.

“I don’t see any of this coming to an end anytime soon,” says Jones. “My nephew who works in the shipping industry recently posted a message to the family saying we all better stock up now.”

In the meantime, Jones is grateful for the nimble staff she leads and for the substitutes who come in to help, many of whom are retired food service workers who ran kitchens and are incredibly knowledgeable and helpful, she says.

What gets her through the harried days is what has always gotten her through – working with the students.

“The sad thing is that when I’m this busy, doing two people’s jobs, I don’t get to interact as much with the kids,” Jones says. “But for all of us working in schools, ultimately it’s the kids who keep us coming back each day.”