Do shorter school weeks produce savings without compromising student achievement? Depends on who you ask.

Before Shana Myer’s school in Apache Junction Unified District, just east of Phoenix, Arizona, adopted a four-day school week this academic year, the third-grade teacher met with her other team members on Saturdays to plan lessons.

“We’d arrive early and attempt to plan our upcoming week within a few hours,” she says. “Working Saturday wasn’t exactly our idea of a great way to spend our weekend -- we all have families, errands, and household chores, not to mention grading.”

But now that Myers and her colleagues are on a four-day week, they use Fridays as their planning day.

“Even though we've already worked at least 10 hours Monday through Thursday, we're still in school mode on Fridays, and we've found we’re creating far superior lessons,” she says. “Quite frankly, this year's lessons are the best we've ever had, and I think the change to four days has allowed us to be the teachers we truly desire to be, giving our kids the best possible learning experience, while renewing our mental devotion to the profession we felt driven to join.”

And, since students are in school longer on each of the four days, the extra time allows enough time for extended activities.

“For example, the science teachers have enough time to run labs, have the students write the lab reports, and clean up the labs in one class period,” she says. “In English class students can write a rough draft, revise, and write a final draft of essays in one or two days instead of taking a week.”

Myers has seen other positive impacts. Absences are down, and gone is the “Friday slump,” when students would drag through the day, tired and disengaged. Now, even though all four days are tightly packed, she says her students seem to know that their continued attention is vital to getting through the lessons. They are "on" at all times, she says, and are more engaged and reactive to the lessons.

“This is a huge change from the five day week,” Myers says. “In a traditional schedule, it seemed they were less invested, and treated school more casually.”

She admits there was a lot of concern that elementary age kids wouldn’t have the mental stamina for longer days because of short attention spans, but she’s found that they do better academically on a four-day schedule than they did on a five-day week.

According to the National Conference of State Legislatures, approximately 120 districts in 21 states around the country, most of which are small, rural communities in western states, have cut Friday (or Monday) from the schedule. Comprehensive research evaluating how four-day school weeks affect student performance, however, is limited, and what does exist delivers a mixed picture. 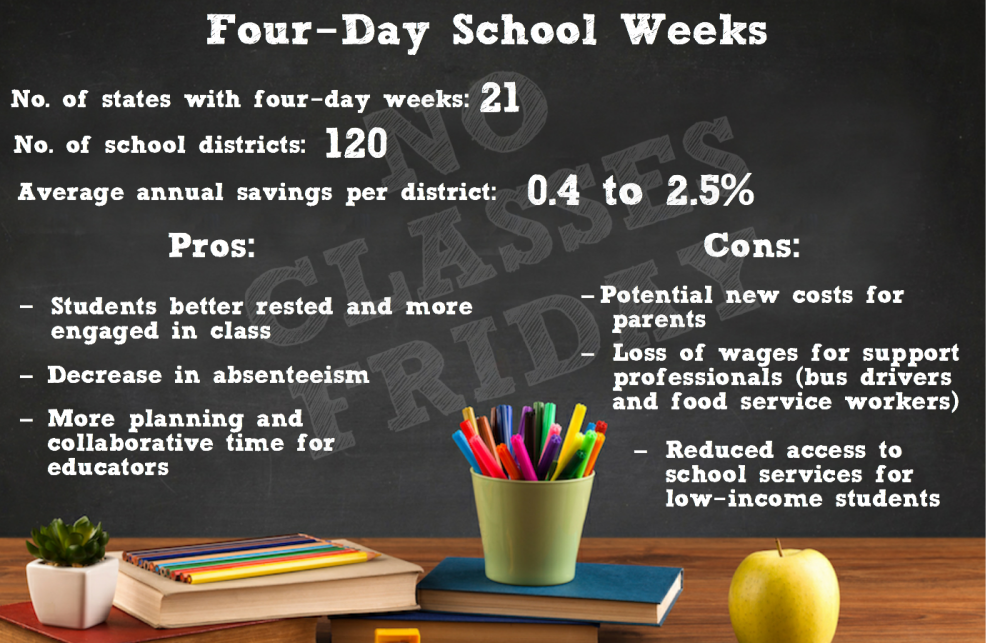 Mark Anderson, assistant professor in the  Montana State University Department of Agricultural Economics and Economics and Mary Beth Walker, professor and dean with the Andrew Young School of Policy Studies at Georgia State University, examined elementary school test score data on the Colorado Student Assessment Program (CSAP) from 2001-2010 across the state’s rural districts, fifteen of which operated on a four-day week.

The researchers found the percent of students scoring either proficient or with advanced proficiency in reading went up at schools on a four-day schedule and were higher than their peers in school districts who remained on the five-day schedule.

“We didn’t find a negative correlation between the performance of elementary school students and the four day-schedule,” Anderson said. “Just about every state has school districts either adopting or thinking about a four-day school week, something that is considered during tough budget times in public schools, especially during and following the recession. One of the biggest worries is that the shortened schedule would compromise student performance, which makes the results even more interesting and all the more policy relevant.”

Anderson concedes that the study was not reflective of large or urban districts, and a four-day schedule may not work for all districts.

In Montana, where more than 100 schools are on a four-day week, a study found that the change may not work in the long term.

Tim Tharp, superintendent of Sunburst School District in Sunburst, Montana, conducted research for his doctoral dissertation at the University of Montana and found that student performance holds steady or shows an initial improvement for the first few years when schools switch to a four-day week. After that, however, performance plummets.

Tharp found that in 2011, standardized test scores were slightly below state averages — not uncommon for small, rural and especially reservation schools in the state. But they dipped alarmingly in 2012 and again in 2013, falling farther away from state averages.

But just as Anderson says his research isn’t representative or predictive of all districts, Tharp says his conclusions don’t mean all schools using a four-day model will share the same fate.

“There are probably districts in Montana that are still holding steady, even showing some increases,” he told the Billings Gazette.

In any district, working parents have to scramble to find child care for the extra day. For one Minnesota school district, it was estimated that a four-day school week would cost families an extra $600 per year in childcare expenses. In Shana Myer’s district of Apache Junction, many families are finding it very expensive to find care on the fifth day.

Bill and Jennifer Florence, will pay more than $1,500 in child care for their kids Chloe, 11, and Austen, 8, because of the four-day schedule. "We are not happy with it," Bill Florence told National Public Radio. "It isn't the ideal situation. We would rather have the kids in school on Friday."

Apache Junction school board member Mike Weaver agees the four-day school week is not ideal, but the state of Arizona ranks 49th in school funding, and Apache Junction is especially underfunded because of low income populations and low enrollment. Teachers are paid approximately 10 percent less than those in surrounding districts and the community has consistently voted against taxes for budget increases. Rather than closing more schools, the district explored the four day week and Weaver says both teachers and students have responded favorably.

“I’ve heard an incredible number of teacher narratives about how they’re doing a better job in classroom today than they ever have,” Weaver says. “According to our survey, staff is overwhelmingly in favor at 90 percent, and middle and high school students are in favor at about 70 - 80 percent. Parents who have responded are not as supportive but still responded at over 60 percent” 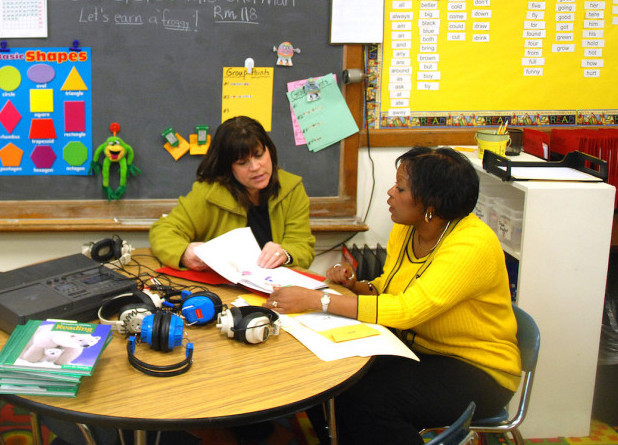 In districts that have moved to four-day school weeks, many educators have more time to plan and collaborate with their colleagues.

Weaver and other school board members acknowledge that working parents struggle with the Fridays, but that the city of Apache Junction and other community partners have set up Friday activities and he’d like schools to set up remediation and enrichment programs on Fridays.

“Unfortunately, we’re financially unable to provide that right now,” he says. “Going forward, I hope and pray that we can get our community to support our schools at the ballot box.”

Macomb Public Schools, a district of about 300 students in Oklahoma, switched back to the traditional five-day week after finding the four-day week didn’t improve student performance. What’s more, according to superintendent Matthew Riggs, the four-day week cut access to food for the 76 percent of students who qualify for free or reduced-rate school meals.

“There were kids I firmly believe were leaving school on Thursday and weren’t getting a good meal until Monday morning when we served breakfast again,” Riggs told Tulsa World.

And the potential savings from moving to a four-day school week may not be all that impressive. In 2011, Michael Griffith of the Education Commission of the States (ECS)  analyzed districts’ actual savings and found they tend to range from 0.4 to 2.5 percent per year. Teachers usually work the same total number of hours at schools on a four-day schedule because between 60 to 90 minutes are added each day to keep the same instructional hours.

Any savings would come from reduced transportation and cafeteria costs and bus drivers and food service workers would bear the brunt of those savings. Unless they can make up the extra hours, they could see their paychecks shrink by as much as 20 percent.

If cost savings are so low, it begs the question: Why make the change? Some districts find that it boosts educator morale, leading to less turnover, which in turn can be costly. And savings add up when you consider a district's entire budget.

In the Duval school district in Florida, for example, moving to a four-day week produced only a 0.7% savings, yet that resulted in a budget reduction of $7 million.

"That $7 million could be used to retain up to 70 teaching positions," writes Griffith in the ECS report. "When faced with a choice of reducing the school week by one day or letting 70 teachers go, it is easy to see why some school administrators have chosen to go with the four-day week."

With few long-term studies offering conclusive results, however, the bottom line for districts considering a four-day schedule is to proceed with caution, says Jennifer Davis, Co-Founder and President of the National Center on Time and Learning (NCTL), an organization dedicated to expanding learning time to improve student achievement and enable a well-rounded education.

“While the four-day school week may be appealing to some districts, especially rural districts where transportation costs are significant, NCTL believes this is a move in the wrong direction, especially if there is a reduction in total instructional hours,” she says. “Too many of our students do not start school ready to learn and never catch up, so the prospect of cutting school time is of great concern.  At minimum, communities must work together to design a system of support for teachers, students and families so that even if school is out of session, students are in safe, productive learning environments and teachers still have the time they need to  collaborate and learn new skills.”