The court saw through the political attacks on the workplace rights of teachers, educators and other public employees, says NEA President. 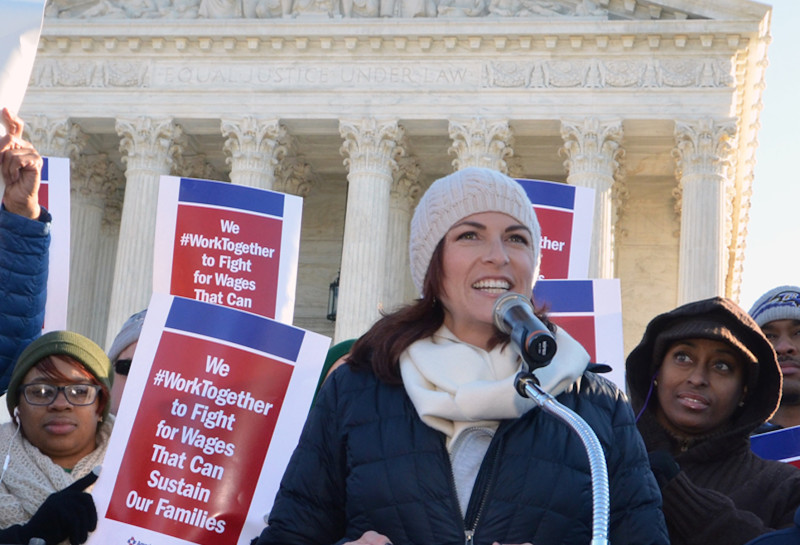 The U.S. Supreme Court on Tuesday issued its decision in the highly-anticipated case, Friedrichs v. California Teachers Association (CTA), reaffirming that both public employees and public employers have a compelling interest in having strong and effective collective bargaining. The 4-4 ruling leaves intact the precedent established by Abood v. Detroit Board of Education, the 1977 case in which the court upheld the fair share fees that support collective bargaining.

It was these fair share arrangements that the Friedrichs lawsuit, bankrolled by the right-wing Center for Individual Rights, sought to dismantle.  Fair share fees, sometimes called agency fees, have been permitted for decades in the United States and are part of tens of thousands of public sector collective bargaining relationships. The petitioners in Friedrichs argued that the First Amendment prohibits fair share fees. In fact, the case was nothing more than a broad, well-funded attack on working people and their unions.

The court, however, rejected this attempt to silence the voices of teachers, school bus drivers, cafeteria workers, and other educators who work together to shape their profession, said NEA President Lily Eskelsen García.

Tuesday's decision, added CTA President Eric C. Heins, reaffirmed that a strong educator voice is always is in the best interest of students.

“California’s educators will continue to work together to provide quality, safe and healthy schools as we continue to ensure our students get the quality public education they need and deserve,” Heins said.

Soon after the court announced last July that it would take up Friedrichs in the 2015-16 term, NEA, CTA and a number of their affiliates filed the union respondents’ brief, which explained why Abood remained sound law and should be upheld. In November, hundreds of groups and individuals—representing all levels of government and civil rights organizations, and including public officials, academic experts, and others—filed 24 briefs amici curiae (“friends of the court”) with the court. The state of California also filed in support of Abood, explaining that fair share fees were critical in effectively managing its substantial public workforce and ensure the efficient delivery of quality public services.

In January, as the justices hear oral arguments in the case, hundreds of educators from across the nation braved freezing temperatures and gathered outside the court to demonstrate their support for working Americans. Among them was Reagan Duncan, a kindergarten and first grade teacher at Maryland Elementary School in Vista, Calif. She said Tuesday's  decision means she can continue advocating for their students.

“Through negotiations between my union and the school district, we were able to secure smaller class sizes for our students,” explained Duncan,  “Smaller class sizes help teachers focus on each student’s individualized needs and allow for more one-on-one attention."

Duncan's sentiment was echoed by her fellow educators.

“I’m thrilled millions of educators like me can continue to work together through their unions to advocate for the best teaching and learning conditions of their students,” added HaSheen Wilson, a network administrator at Youngstown State University in Ohio. “In an era when the rich just get richer while the poor seem to fall through the cracks, we need to come together and speak out for change — whether it’s smaller class sizes, training for educators, fair pay and benefits, healthcare or safer work environments.”

The court's ruling in Friedrichs does not, by any stretch, put an end to the threat against fair share and collective bargaining. Dozens of similar cases are currently working their way though through the federal court system, although none will end up on the court's docket until its next term at the earliest - or not at all, depending greatly on who is sitting on the court. In March, President Barack Obama nominated Merrick Garland, chief judge of the United States Court of Appeals for the District of Columbia Circuit, to the court. The NEA has urged the U.S. Senate to do its job and promptly consider the president's nominee.

"Merrick Garland is eminently qualified, has impeccable credentials, and possesses a mastery of the law," added Eskelsen García. “I urge the Senate to move quickly to hold a hearing and a vote to confirm Judge Garland so that the court can continue to serve the American people at full strength.”