Anyone who has worked in a school knows clerical professionals are central to everything that happens. 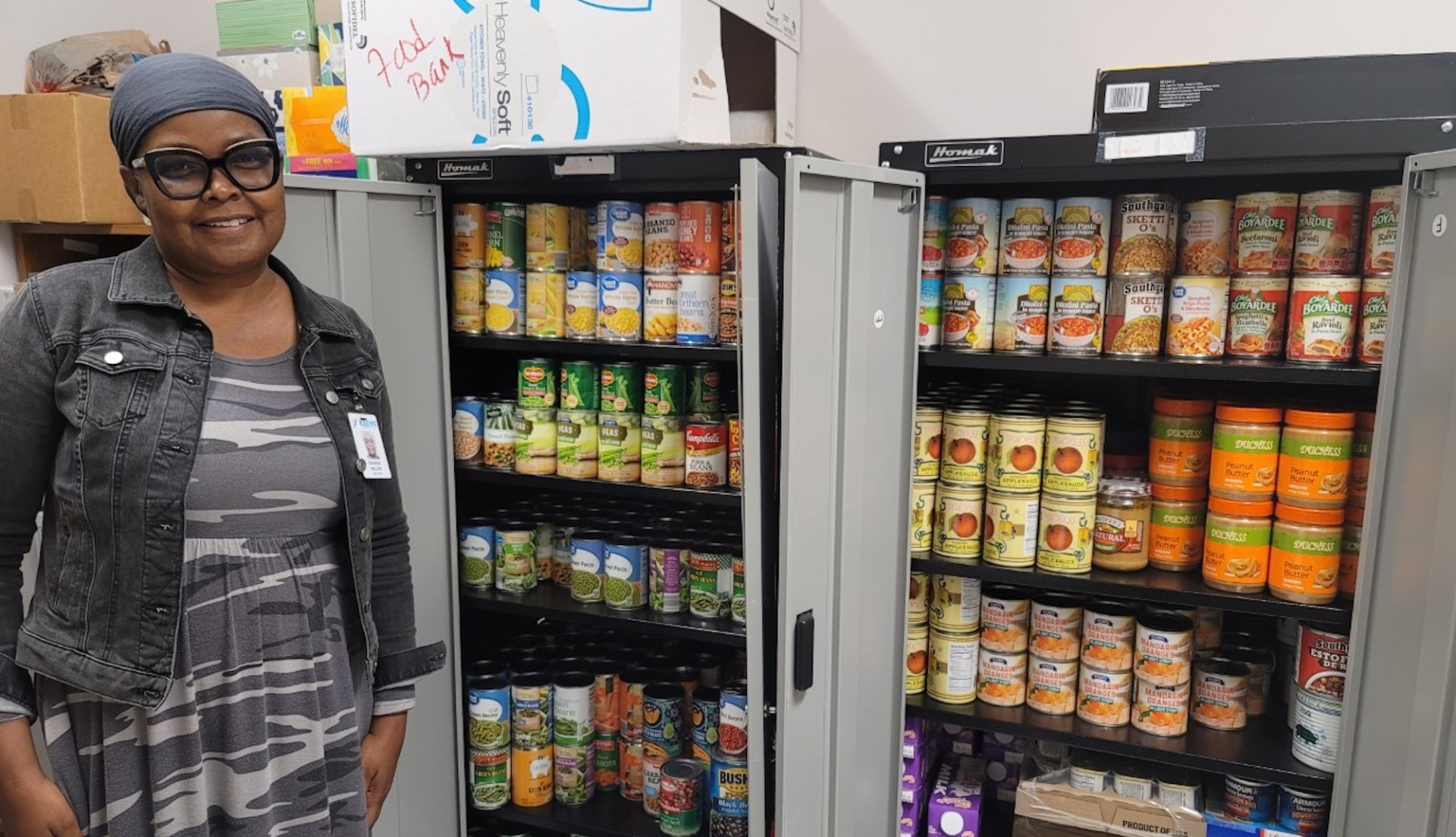 Diannia Miller, a secretary in the Christina School District in Newark, DE, established a food pantry during the pandemic to help families in need.
By: Jim Paterson
Share

Heather Gilchrest’s morning at Village Elementary School can sometimes be “a bit hectic,” she says. That seems like a significant understatement.

Teachers typically stop in to get a piece of candy from a filled jar on Gilchrest’s desk, then may stay to talk about the challenges they faced that day in class and that morning at home.

“I like my office to be a space for people to come by and say hello or vent about troubles,” she says. “They’ll stop for some candy and a chat or a laugh, and that is no small thing. For some it's like clockwork every day, and I love it. It gets them out of their space for a few moments to regroup.”

Then there are the questions about a projector in one room and the laptops in another.

“I've sort of become our in-house tech support,” she says. “People come to me with all types of tech issues. If I can't fix it, I know who can and how to get a hold of them,” she says, noting that now staff from other schools are seeking her help.

Parents, many who do not speak English well, often arrive to register a new student, and Gilchrest guides them into her office and helps them fill out the necessary forms, especially if they are unable to get online or unfamiliar with technology.

“I've made some incredible connections this way and often learn things about a family I otherwise would not have gotten to know. In a lot of instances, this opens the door in a natural way to learn about other supports we may be able to offer.”

And, in the midst of this and a host of other unplanned interactions with students, staff and others, Gilchrest is also efficiently doing all the work that falls within her job description at the school, located about five minutes from postcard coastal scenes in the small town of York, ME.

She is not alone in having this busy pace to her day.

As most every educator will attest, clerical professionals, such as secretaries and front office staff serve as the face of a school and the foundation for its structure and activities. But they also are the source of everything from copy paper, winter hats, and birthday cake candles to student emergency contacts or bus route information along with the precise requirements for emergency drills or the quirks of the school day schedule.

“We too often underestimate the value of those in the front office. But anyone who has worked in a school knows that they are central to everything that happens,” said NEA President Becky Pringle

Pringle also noted they often share the work of everyone in the building, serving as a counselor, parental liaison, teacher, custodian – and frequently as an assistant principal.

Getting the Recognition They Deserve

“If I had to use one word for a school secretary, its resourceful,” says Marian Phillips, who held that position in high school and now is the secretary at the district level for the Nassau County School District in the northeast corner of Florida. “They are relied on to be the supervisor’s eyes and ears, meet deadlines, resolve issues and be able to assist in any way.”

According to Peter DeWitt, a former teacher and principal who writes about educational leadership, too often school secretaries don’t get the recognition or compensation they deserve.

“Many secretaries work longer hours than they get paid for, can’t escape school even when they’re home, and don’t get paid equivalent to the stress of their job. If you don’t believe that’s so, go visit a school on the first week of school at bus dismissal,” he says.

DeWitt says they are the “front line” at the school for anyone visiting and for a steady stream of requests from the staff and students.

“I’ve been to schools where the secretaries have file cabinets full of things like new underwear, boots, hats and gloves to give to students in need,” says Grace Leavitt, president of the Maine Education Association (MEA), who has sought out the secretary for support as a high school Spanish teacher and now repeatedly engages those in the position like Gilchrest as she travels the state as MEA president.

“You would think a school secretary has a dozen hands considering how much they do in our schools to keep them running, especially in rural areas where the secretary is even often acting as a school nurse or social worker because of a lack of staffing.”

For Diannia Miller, a secretary at Keene Elementary and the Christina School District in Newark, DE, her work expanded to include establishment of a food pantry during the pandemic to help what she saw critical problem of a shortage of food for many families.

“This the part of my job that I absolutely love doing,” Miller said. “Just knowing that families are able to come to the food pantry to supplement their food is so fulfilling to me.”

Parents contact Miller or a family crisis therapist to access the food, which comes from donations and a local food bank organization that had already been working with the school. She says that while some problems eased with the pandemic ebbing “hunger will never go away and the school is a good place to spot the need and provide the help.”

DeWitt notes that school secretaries and front office staff also can bolster school climate because they interact with so much of the staff and student body, recalling that one secretary with whom he worked often counseled both. “She was instrumental in building student relationships because she had background knowledge of kids and families that I did not have. They also often have a way of calming kids down who were escalated.”

“Every year a few high school students invite me to graduations. I think of it as such an honor,” she says. “I get to see them as they enter our school system and then as leave it.”

This year Jennings started her 23rd year in that role at the school and she never seems to tire of the days jam-packed with familiar routines and a steady stream of the unexpected events that only young children can create.

“No two days are alike,” she says. “It can be very hectic, but I love it. I love the kids and I love seeing them change and grow.”

Their role as an initial and key contact for staff, students, parents and the community, makes them a resource for a broad swath of information about each, DeWitt says. They often have the most institutional knowledge in the building because they interact with each segment.

DeWitt recalls that one secretary he began to work with gave him a yearbook when he was first hired as principal and suggested he get to know names of students and staff. She included the names of teachers’ spouses so he might connect with them more easily. “It was a small thing, like many other things she did, that made my work easier and more effective,” he said.

Phillips notes that during the pandemic when disinfecting solution was needed, she recalled that a paper mill was making emergency supplies of disinfectant with a solution from their process. “With one phone call, to the mill manager I was able to acquire enough of the solution to get us through the beginning of the school year,” she says.

Secretaries and other clerical workers often, however, are not adequately reimbursed, DeWitt says. While appreciation can also be in short supply, for Gilchrest at least, that hasn’t been the case.

“We are just a jack-of-all-trades by nature. In schools we do so many different things, it would be impossible to get credit for all of it. I can say, though, that I truly feel appreciated by the people that I work with every day. That makes me incredibly grateful.”