Stemming the exodus of teachers starts with better pay. Officials take unprecedented step of approving increases in middle of the school year.
By: Tim Walker
Share

James Cabralda grew up on the island of Oahu and, like his father and grandfather before him, attended Leilehua High School in Wahiawa. It's also the school where, since 2000, Cabralda has worked as an early college coordinator. Despite these obviously strong roots, Cabralda often wonders if he can continue to afford to work and live in the community he loves.

“Paradise is expensive,” he says. “For educators it is very difficult. The cost of living is too high.”

But he knows other educators - many of his current and former colleagues included - don't have that anchor in the community that helps them stay in a profession that makes it difficult to make ends meet.

“I've watched too many teachers come and go. They just can’t afford to live here,” Cabralda says. “So they either head to the mainland or quit teaching altogether.” (In the 2017-18 school year, 423 teachers left Hawaii for the mainland, a 71 percent increase from five years ago.)

The teacher shortage in Hawaii is particularly severe. The state ranks first in the country in teacher turnover rate. According to the Learning Policy Institute, Hawaii's percentage of uncertified teachers — 4.9 percent — is also nearly twice that of the national average of 2.6 percent.

According to the Department of Education, Hawaii's school system experienced a shortfall of 1,029 qualified teachers for the 2018-2019 school year, 352 of which were in the area of special education. Overall, more than 60,000 students are not taught by a qualified teacher each year.

The state, when adjusted for the high cost of living, also has the lowest teacher salaries in the nation. 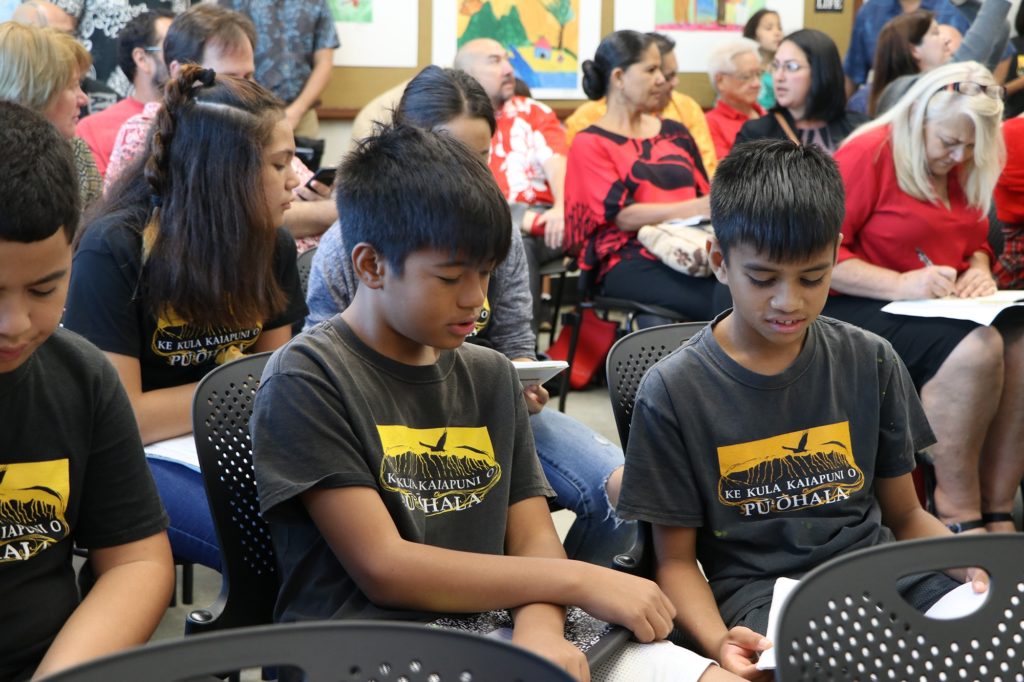 More than 60,000 students in Hawaii are not taught by a qualified teacher each year. (photo: HSTA)

In December, the state Board of Education took what Hawaii State Teachers Association (HSTA) President Corey Rosenlee called a “bold step”: a $46 million salary adjustment that could impact roughly 7,000 teachers. Pay raises would range from $3,000 to $8,000 for educators employed in the schools that have been the hardest to staff. In addition, special education and language immersion teachers will receive a differential of $10,000 and $8,000 annually.

This is just the first phase of an ambitious, comprehensive plan to end the teacher shortage crisis  in Hawaii by 2025, the result of a partnership between HSTA, the Board of Education, Schools Superintendent Christina Kishimoto and Hawaii Governor David Ige. The plan tackles more than low salaries, but the urgency around pay and the state's high cost of living is self-evident.

“We have to address pay, it's that simple,” said Rosenlee. “It is why we cannot retain teachers and why we have a recruitment problem.”

The fact that the vote to approve the salary differentials came in the middle of a contract and halfway through the school year speaks to the urgency surrounding the shortage. By taking this unprecedented step in December, the board sent a strong, clear signal to educators who may be thinking of transferring that help is on the way.

Existing funds will pay for the differentials for the rest of the school year. After that, it’s up to the legislature to provide funding for 2020-21.

And this is only phase one of the plan. In January, thanks to HSTA’s advocacy, the board turned its attention to another pressing issue: salary compression.

“We are different from the entire United States,” said Rosenlee. “It is standard to pay teachers more for years of service. We don’t do that in Hawaii.”

“For a lot of teachers who went through the teachers’ strike and furloughs, we have not received step raises on a regular basis,” said Bea DeRego, a test coordinator at Kahuku High and Intermediate. Get the full story: https://t.co/ahRxrzuq4h #EndHawaiisTeacherShortageCrisis pic.twitter.com/veh2h8tdGi

Thousands of Hawaii educators, despite decades of service, have been stuck or “compressed” on the pay scale after lawmakers curtailed step increases after the recession. Educators with at least 20 years’ experience, for example, often find themselves only two or three steps ahead of colleagues who have been in the profession for 7-9 years.

“If we want students to have quality teachers, we want to keep the teachers here as they gain more experience instead of having the constant turnover at the bottom with inexperienced and new teachers, which is what we have now,” said Lisa Morrison, a student activities coordinator at Maui Waena Intermediate School

Easing up the salary schedule, said James Cabralda, will make it easier for him to remain in the profession.

“Experienced teachers will leave otherwise. Experience matters in the classroom.”

Cabralda was just one of many HSTA members who testified before the Board of Education in January. They were joined by an overflow crowd of students, educators, parents, and community supporters. Hundreds more weighed in with written testimony supporting higher pay.

If the compression issue is addressed, 7,000 educators across Hawaii could receive anywhere from $900 to $17,000 in annual increases. Once experience moves educators automatically along the pay scale every two years, Rosenlee says, HSTA would then be able to focus more on boosting base salaries of all teachers across-the-board.

The community support generated by HSTA's efforts will undoubtedly carry over as the campaign to reduce the teacher shortage -  which 4,500 members have pledged to support -moves into the next phases. These include partnerships to help fund college tuition for students who commit to teaching in public schools for 3-5 years; an expansion of “Grow Your Own” programs; and working with lawmakers and the private sector on ways to increase affordable housing for educators.

“The teacher shortage here is a crisis and everyone knows it. We can't go on with the status quo,” said Cabralda. “There's a lot of work to do, but what we've accomplished so far is a big deal.”