The Heat is On: Educators, Students Forced to Deal With Sweltering Classrooms

As temperatures rise and classrooms get hotter, the lack of air conditioning in many schools is creating unsafe and unproductive learning environments.

When a public school educator takes to Twitter to declare “We did it!” you might expect some good news about student achievement, a school victory, or maybe an advocacy win benefitting public education.

But last May, Mark Westpfahl, a history teacher in St. Paul, Minnesota, was pointing to a milestone that was hardly worth celebrating:

We did it! We topped 100° in my #CHCougars classroom.
I'm not sweating anymore.
I'm light headed.
I have a headache.
All the classic signs of heat exhaustion.
Imagine what my my pregnan & nursing colleagues are going through & of course my students, esp, those observing #Ramadan pic.twitter.com/NE0fdd6PD7

One week later, there was no relief in sight as a heat wave gripped the midwest. With only a few days left in the school year, Westpfahl wasn't letting up.

7:18am. Already 82-84° in the #CHCougars classroom. Yesterday got up into the high 90°s again. I haven't seen a class room temperature below 78 in my room in more than 3 weeks. 2 more days. But, summer school starts a week after school gets out. It'll still be a problem. pic.twitter.com/RDWHVLANEB

Westpfahl had already written a letter to district officials about these unacceptable conditions that had forced him to send a dozen students to the nurse's office. He was soon lugging bags of ice and igloo coolers into school and took to Twitter again to asked if anyone in the area could spare a few barn fans to help create a little cross breeze in the school's stifling hallways.

School officials in St. Paul acknowledged the problem and delivered 2,000 water bottles and 361 fans to schools cloaked in hot temperstures. They also told families to provide their children with plenty of water and wet towels to wrap around their necks .
That the district had to scramble to help students and staff cope with the heat is unsurprising in view of the fact that air conditioning is installed in only one-third of its schools.

Very few districts have mandated temperature maximums, nor is air conditioning required in many schools. A 2017 analysis found that a dozen of the largest districts in the country, including Baltimore County, Chicago, Denver, Detroit, and Jefferson County, Colorado (suburban Denver), did not have fully air-conditioned schools.

So what actions do they take when classrooms become too hot? Often schools just close early, or they stagger toward the last day of school with a patchwork of quick, temporary, and usually inadequate fixes.

Many districts deem air conditioning to be an inordinately expensive investment, pointing out that the suffocating heat of summer generally arrives and stays after school gets out. Students and staff, however, still have to cope with May and June, and oppressive temperatures stick around long after they return in August or early September.

And even if a school is equipped with air conditioning, systems break down and often don't get repaired or upgraded. The air conditioning in Mark Westpfahl's school in St. Paul, Capitol Hill Magnet, malfunctioned as the heat wave hit the area in May. 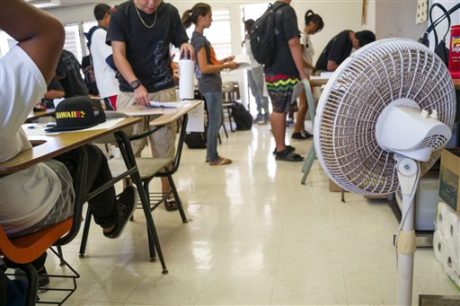 Many of the largest school districts in the United States do not have fully air-conditioned schools. (AP Photo/Marco Garcia)

At Attleboro High School In Plainville, Massachusetts, students spent much of their time of the last days of the 2017-18 school year in the air-conditioned auditorium, library or computer labs.  The school's AC system wasn't pushing enough cool air to reach most of the classrooms.

School officials and educators kept close track of any potential heat-related health effects and moved students around when classrooms became too hot.

As Brianna, a junior at Attleboro, told The Sun Chronicle, “It can be really hard to concentrate in class when it’s this hot. I do a lot better when it’s cool as it helps me stay calm and relaxed.”

On the hottest days, she added, the two fans situated in her classroom don't provide much relief.

“This time of year you do the best you can do,” said Plainville Public Schools Superintendent David Raiche.

But “best” may not be good enough. Coping with oppressive heat in a sweltering classroom isn’t just a bothersome rite of passage before summer break. Hot classrooms are unhealthy for students and staff and, as a team of researchers concluded recently, the lack of air-conditioning in schools is directly impairing student outcomes.

In a paper published by the National Bureau of Economic Research, Joshua Goodman, Michael Hurwitz, Jisung Park, and Jonathan Smith examined test results of 10 million students attending high school from 2001 to 2014. They then used federal weather sensors to measure the temperature experienced by students on school days in the year leading up to the test.

By crunching this and other data, the researchers were able to determine that students who took the exam after experiencing a hotter year had lower scores compared to their test performance after a cooler year. Without air conditioning, each 1°F increase in school year temperature reduces the amount learned that year by one percent (or the equivalent of being absent for two days).

“Air conditioning appears to offset nearly all of the damaging impacts of cumulative heat exposure on academic achievement.” they concluded. 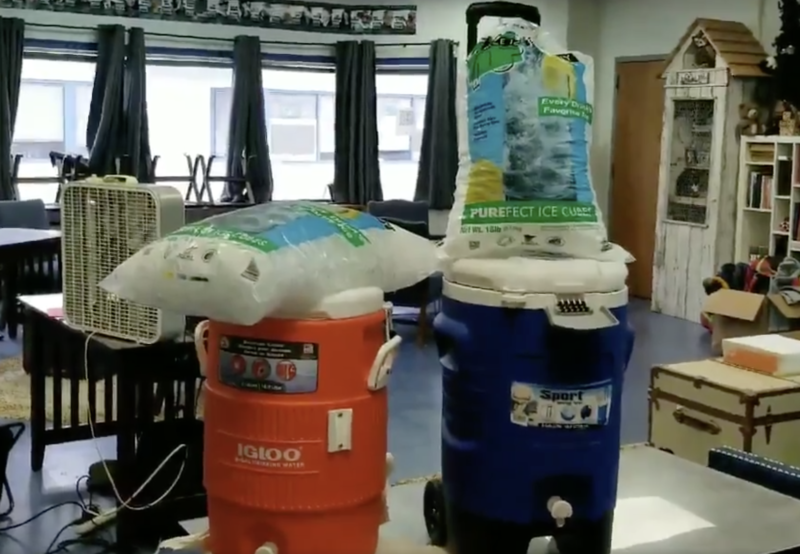 As a heat wave gripped St. Paul in late May, teacher Mark Westpfahl hauled bags of ice and igloo coolers into the classroom to help students cope. (Photo: Mark Westpfahl)

Most troubling, though hardly surprising, is the disproportionate impact of hot classrooms on students of color. The report's authors conclude that “heat effects account for up to 13% of the U.S. racial achievement gap.”

The researchers acknowledge the strain air conditioning can put on a district's budget, but argue the long-term benefits can't be overstated.

Goodman, the study's lead author, told Earther in June that since the paper's publication, he has heard other ideas about curtailing heat in classrooms.

“I see school air conditioning as one piece we know for sure how to do,” Goodman said. “It doesn’t mean it’s the best solution or only solution but it is a potential one. I’ve gotten email from folks about planting trees and shading schools that could help.”

Lawmakers in New Jersey are stressing this point as they marshal support for a bill, introduced in March, that would require all schools to have temperature-controlled classrooms. The bill’s supporters in the legislature say there are various ways to help cool a classroom, but air conditioning tops the list.

If the bill is approved and signed into law, the New Jersey departments of education and health will be charged with creating guidelines, which districts will be responsible for implementing.

The state’s public school educators have lined up to support the bill.

“Extreme temperatures like those that exist in too many of our schools hurt student learning,” said New Jersey Education Association President Marie Blistan. "If we can air condition every movie theater in New Jersey and heat every fast-food restaurant, there is no excuse for failing to modernize our schools in order to give our students the best possible learning environment."