The Homework Gap: The 'Cruelest Part of the Digital Divide'

With millions of students lacking Internet access at home, experts worry technology continues to create an uneven playing field in the classroom.

Educators have been talking about the "digital divide" for two decades, and while some progress has been made in closing the gap, inequities persist in communities across the country. Major efforts have been undertaken to improve access to new technologies in lower-income school districts, but as more teachers turn to digital learning, Keith Krueger, CEO of the Consortium for School Networking (CoSN) worries that  “technology will be one more way to expand inequities rather than a bridge to narrow. ”

Krueger points to the so-called "homework gap," or the barriers students face when working on homework assignments without a reliable Internet source at home. This gap has widened as an increasing number of schools incorporate Internet-based learning into daily curriculum. Three-fourths of school districts, however "are not doing anything about ensuring outside of school access to broadband,” Krueger says, citing CoSN's recent infrastructure survey.

In 2009, the Federal Communication Commission’s Broadband Task Force reported that approximately 70% of teachers assign homework requiring access to broadband. In addition, about 65% of students used the Internet at home to complete their homework, which could include submitting assignments, connecting with teachers and other students through group discussion boards, working on shared documents as part of a group project and doing online research for a school paper. Parents rely on the Internet as well to be fully-informed on their child’s academic performance, with many schools turning to online grading systems.

But what does this mean for the 5 million households with school-age children that do not have high-speed Internet service at home?

The homework gap forces students in these household to head over to the library to squeeze in two more hours of homework instead of going home for dinner after a long sports practice. Some may decide to forgo the safety and warmth of their home to venture out to the commercial parking lot with free Wi-Fi access in order to complete and submit their assignment. Or many students are simply unable to finish the work.

According to a recent study from the Hispanic Heritage Foundation, Family Online Safety Institute and My College Options, nearly 50% of students say they have been unable to complete a homework assignment because they didn't have access to the Internet or a computer. Furthermore, 42% of students say they received a lower grade on an assignment due tol ack of access. 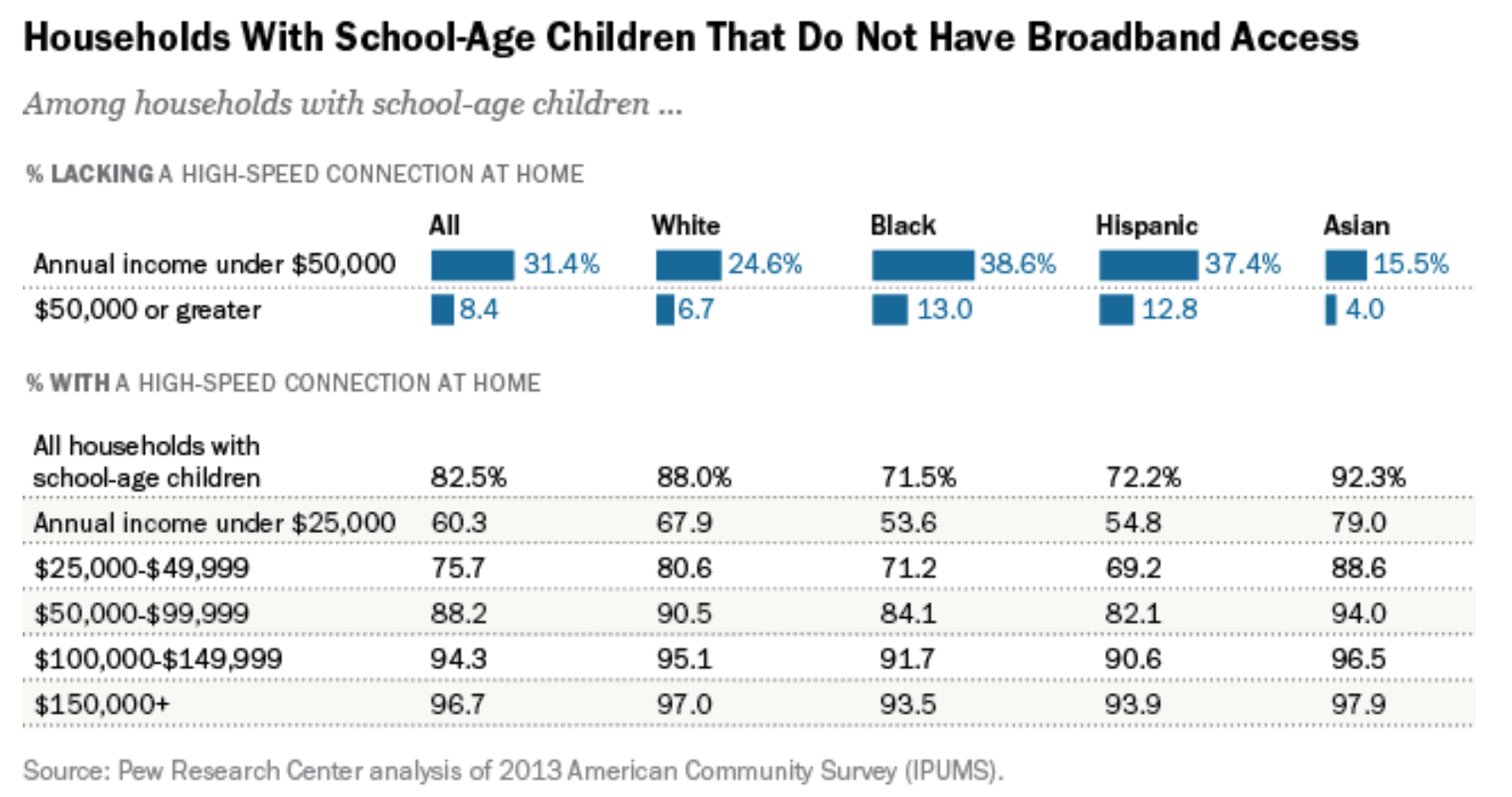 The homework gap is real and has serious life-long implications. Millions of low-income students are unable to access the tools necessary to succeed in and outside of the classroom, creating an uneven playing field in the classroom. The dilemma has become, says Krueger, “the civil rights issue of today.”

“The world is changing and the skills that students need to thrive are changing,” says Vitiello. “At the end of the day we have to do what we can so that our children will thrive in a global economy. We would be doing them an extreme disservice if we didn't prepare them. But it is essential that students have access to the proper materials 24/7.”

Nancy Hayashi, a Distinguished Teacher in Residence at Cal State
and a former Alvin Dunn educator, believes the lack of access to broadband is robbing millions of students of their full potential.

“You can have a child, who attends all the intervention programs a school can offer for years, be a highly motivated learner in school and have supportive parents, but is unable to truly reach their academic potential due to lack of access,” explains Hayashi. “This child, with so much potential, does the best they can during school hours to complete work, but misses the window for advancement due to time constraints.”

This past year, Qualcomm teamed up with AT&T and Samsung to run a pilot program at Alvin Dunn that provided the school's sixth-graders with tablets connected via AT&T LTE mobile broadband service. While for some students this may sound like just a fancy new upgrade, for Alvin Dunn students it means much more. More than half of the sixth grade class do not have wireless access at home. With these connected devices, they no longer have to arrive at school 45 minutes early to finish an online assignment or stay later to get through some online reading. 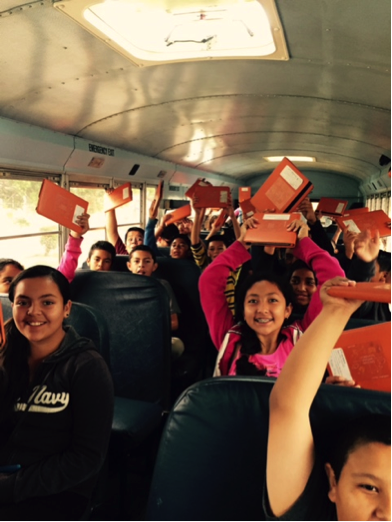 Vitiello credits the program with leveling the academic field in a way no other intervention has achieved. “Our students now have the same access to materials that other students have.  Our team is seeing our students close the achievement gap.” says Vitiello.

According to a report by Project Tomorrow, 96% of Alvin Dunn students specifically impacted by the homework gap stated that these LTE enabled devices helped them to become better students, and 78%  stated they "worked together with my classmates more often” as a result of taking a device home.

Despite its success, the program is not self-sustaining and funding is limited. After the pilot ended, however, AT&T agreed to work with Alvin Dunn for another school year year.

The Coachella Valley Unified District in California has equipped school buses with Wi-Fi routers, allowing students to work on homework assignments as they travel to and from school. These school buses also serve as public study locations for students. After bus drivers finish dropping off students, buses are conveniently parked in public spaces where students can study in a safe place close to their home.

And educators, of course, are doing their part by opening school doors early and keeping the library open late. Some teachers limit the amount of technology-based homework they assign and others even print hard copies of all the readings so students will not have to struggle to access them later online.

These and other initiatives, however valuable, are seen more as stop-gap measures until comprehensive strategies emerge to improve access to broadband in every community.

In 2015, the FCC announced plans to upgrade its Lifeline plan that provides telephone access to low-income households. This upgrade would extend support beyond voice service to allow participants to choose between applying the same support to either voice or broadband service. This simple change would both update the program and help bring more broadband to low-income households with school-aged children. FCC Commissioner Jessica Rosenworcel said that while closing the divide requires more than just updating the Lifeline program, "it's a start ...because the homework gap is the cruelest part of the digital divide." 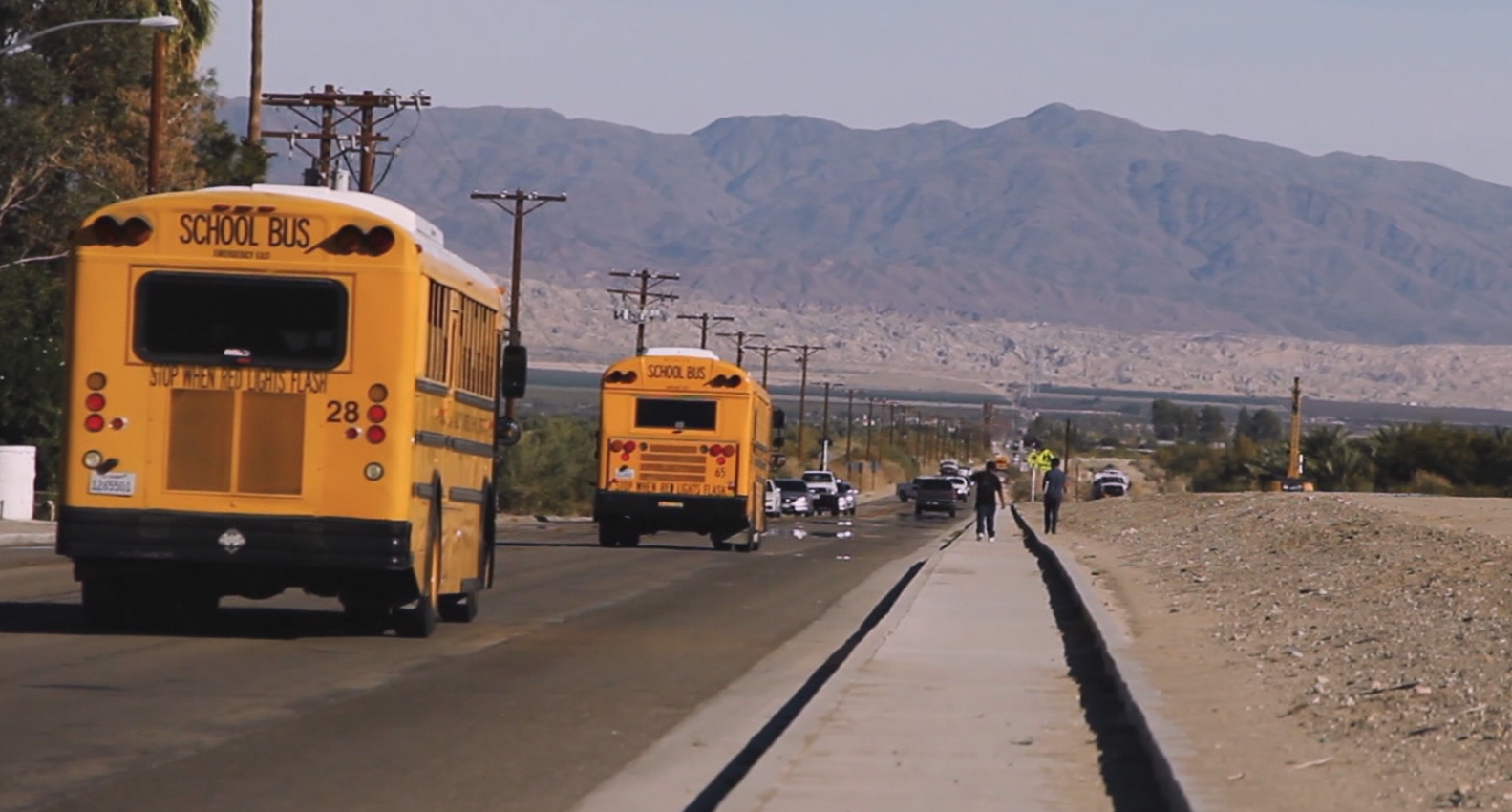 In Coachella Valley, CA., routers have been placed on school buses to enable students to do homework coming and going from school. Photo: PBS NewsHour

The FCC also modernized the E-rate program, implemented eighteen years ago by Congress, which has been very successful in expanding Internet access to the nation's schools and libraries. In 2014, the program received an infusion of $1.5 billion to expand digital connectivity, a move strongly supported by the National Education Association.

Local communities, says Keith Krueger of CoSN, have a vital role to play in creating long-term solutions to the homework gap, and educators should be a part of that process.

“Educators need to be part of a community conversation and strategy of action that involves local elected officials, as well as the business and philanthropic community,” Krueger explains. “School systems cannot alone solve this problem.”