Most students want to be engaged in school, but severe disciplinary policies disrupt learning and make them feel undervalued, unwelcome and misunderstood, according to a new study.

Balancing appropriate discipline with school safety, classroom effectiveness, and positive outcomes for students is a daunting task for teachers and administrators everywhere. Many schools continue to rely on exclusionary discipline, removing students from the classroom through suspension or expulsion for various innfractions. The damaging long-lasting effects of "zero tolerance" has gotten more attention over the past few years, sparking a movement among many schools to move away from these practices and focus more on social-emotional learning, restorative practices, and positive behavioral interventions.

The Center for Promise, the research institute of America’s Promise Alliance, recently analyzed how and why students become disconnected from school after facing harsh disciplinary action. The findings can be found in a new report,  Disciplined and Disconnected: How Students Experience Exclusionary Discipline in Minnesota and the Promise of Non-Exclusionary Alternatives.

The Center studied three school districts in Minnesota that had previously relied on suspensions and expulsions, interviewing 38 middle and high school students who had experienced these exclusionary practices. What the researchers found was that kids wanted to be engaged in school, but felt that the administration and penalization methods inhibited them from doing so. 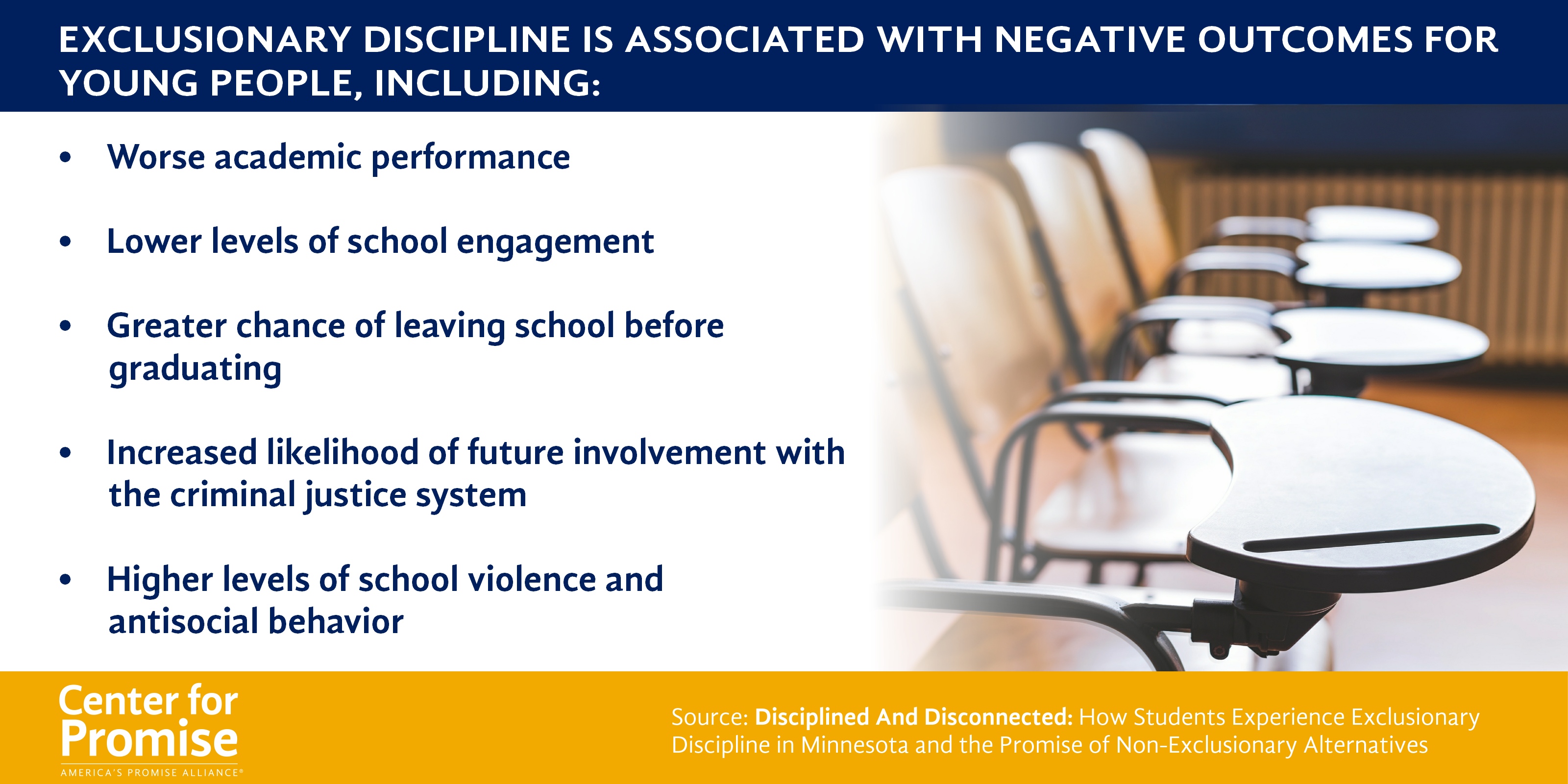 “When students don’t feel heard or understood, that leads them to check out and disconnect not only from school, but their future. That is a terrible and unnecessary result," explained John Gomperts, president and CEO of America’s Promise

“All you got to do is get suspended one time and you’re labeled,” said one student interviewed for the study. “I see it, like they follow the same kids around, like everybody knows, hey, those are the bad kids….”

Another student commented, "It's really dumb, 'cause my grades dropped because of it. I missed a lot of school. It was really stupid, and it didn't even happen during school... They didn't give me any of my work... I got suspended on finals. I didn't get to take them..."

When students don’t feel heard or understood, that leads them to check out and disconnect not only from school, but their future. That is a terrible and unnecessary result."

In analyzing student and administrators’ thoughts on the matter, the Center concluded that kids who were suspended or expelled were more likely to drop out and disconnect from their education for three reasons: the true root of the problem was not addressed, their learning was interrupted, or the students did not feel valued or connected to their school community. Additionally, students of color are disproportionally targeted by the exclusionary practices.

To reform their disciplinary system, the Minnesota districts decided to listen to students' perspectives on discipline, make sure they know their rights and school rules, build trust between administrations and family, provide opportunities for students to make academic progress while disciplined, and invest more in research on non-exclusionary discipline.

As in many other districts across the nation, the communities in Minnesota found that students were being suspended for infractions that were not serious enough to warrant harsh discipline.

“Not only have suspensions and expulsions been disproportionately applied in Minnesota, but nearly half of suspensions and exclusions in schools are for minor, non-violent student behaviors that did not endanger others,” said GradMinnesota Director Alexis Goffe of the Minnesota Alliance With Youth. “What we’ve learned is that, without clear and objective standards, students may be subject to individual school personnel biases about what constitutes disruption.”

The National Education Association is a vocal proponent of improving disciplinary policies and has promoted bringing restorative justice programs to more schools. At the 2016 NEA Representative Assembly, educators approved a policy statement calling for a campaign of awareness and advocacy to address and end the school-to-prison pipeline.

In 2016, Dallas-NEA worked with the Dallas school districts to implement restorative programs in six of the schools across the city. They used methods like “circling,”which brings students and teachers together to discuss behavioral problems and lets the kids explain themselves and be heard.

Dallas educators found that when students feel heard, they are more likely to abide by the rules and engage in their learning process.

“This effort has focused on students building relationships with teachers in the hopes that in these relationships, problems can be addressed and solved before they become bigger issues” says David Griffin, a teacher in Dallas.

In Dallas, the rates of in school suspension dropped by 70%.

School districts across the country are following suit, turning to restorative justice and other programs that foster understanding and communication over excluding students from classrooms.

“If we want more students to stay on a path to graduation,” says John Gomperts, “schools should consider a non-exclusionary approach to their discipline practices and policies to make sure they’re not doing more harm than good.”