How Good Schools and Good Intentions Widen the Achievement Gap

An eye-opening new book looks at how racial inequality thrives at a diverse and high-achieving suburban high school. 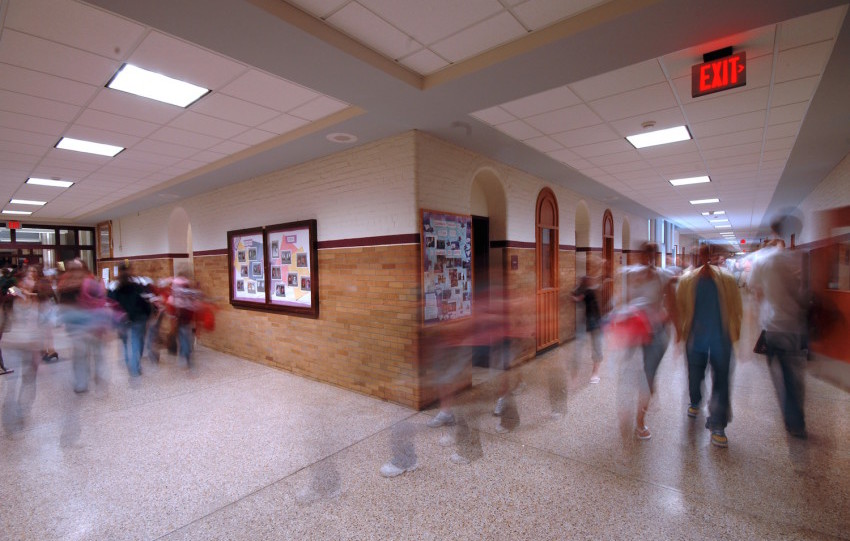 Debate around the achievement gap is usually dominated by issues such as urban poverty, segregation, and school funding. These factors unquestionably have an enormous impact on student outcomes, but why do disparities persist at well-funded, diverse and high-achieving suburban schools?  John B. Diamond, associate professor of education at the University of Wisconsin, and Amanda E. Lewis, associate professor of African American Studies at the University of Illinois at Chicago, spent five years examining such a school to find out. Riverview High (a pseudonym) is in many ways an ideal school, but, despite its successes, is still plagued by wide disparities in achievement. Diamond and Lewis recently spoke with NEA Today about their findings, which they have compiled in an eye-opening new book, "Despite the Best Intentions: How Racial Inequality Thrives in Good Schools."

You spent five years collecting data and interviewing stakeholders at Riverview. How were you able to gain access and how did the project evolve?

John Diamond: An assistant principal approached us a while ago because he had seen African American students struggle academically for so long and wanted to figure out why. The school itself was racially mixed - about 47 percent White, 35 percent Black, and 8.5 percent Latino. We started by talking with a small group of Black students to understand their experiences. We then expanded it into a larger study in which we interviewed about 170 people – Black, White and Latino students, teachers, parents, administrators, security guards and other staff members – to try and get a handle on what was going on at this supposedly very progressive, racially diverse, well-resourced school. Why was there still a large achievement gap? 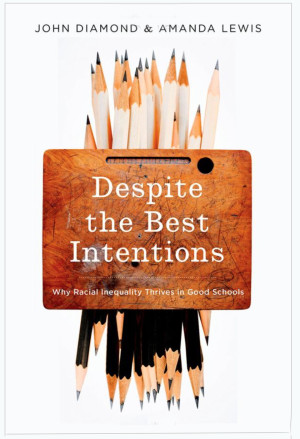 A big part of this was due to the racial hierarchies that were embedded at Riverview. How were they evident not only inside classrooms, but also around the school?

JD: The hierarchies were overtly evident in how the kids would enter the same school, walk together through the hallways, but then go to different classrooms, especially the higher level, more heavily resourced honors classes. Honors classes were 80 percent White in a school that is less than 50 percent White. For Advanced Placement classes, it was 90 percent White. There were also clear differences at the school in how suspensions and expulsions were handed out. Sixty percent of suspensions were for African American kids, who made up only around 35 percent of the student population. Also, a lot of kids from Riverview go to college, but African American and Latino kids were going more often to two-year colleges, as opposed to four-year colleges.

What was also clear was that navigating school was very different for these students than it was for White students. For example African American boys were much more likely to be asked for hall passes than their White counterparts. Also, enforcement of the dress code came down most heavily on Black girls. White girls would violate the code but Black girls would be punished for wearing the same clothes.

Amanda Lewis: It was shocking the first few times you go there, because you see all the kids in the hallway and then you enter an actual classroom and the demographics inside are totally different than they are anywhere else. So the tracking program was where you saw it all. And what was surprising to me was the extent to which students, educators and administrators talked about these patterns in consistent ways. They all recognized these problems. So something that was important for us early on was figuring out how this became so naturalized. It's not just true at Riverview, it's the case at a lot of other schools. That’s why thinking about race in more complicated ways is important, because race becomes not only about how these hierarchies get set up in the first place, but also how our racial mythology and stereotypes are a key part of why people think it's ok. 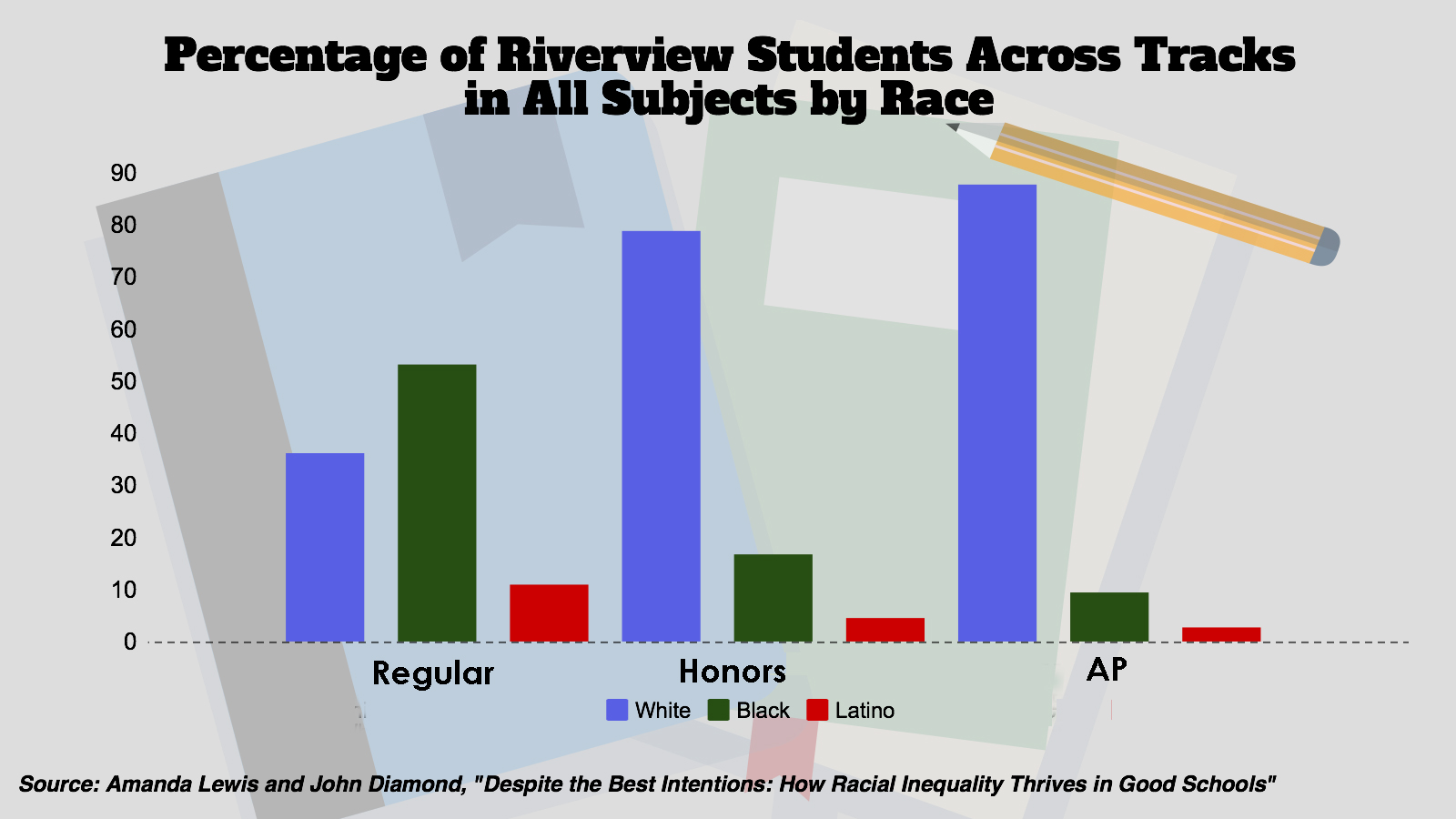 Many people will try to explain away the achievement gap by bringing up "oppositional culture," the notion that many Black students don't try to succeed academically because school is a "White thing." Why do you think people cling to this explanation?

JD: It resonates with many people’s pre-established cultural ideas about race and intelligence and moral investment in education that historically has been  a justification to deny educational opportunities. But study after study shows that oppositional orientation toward education, aspiration, and education doesn’t exist in any race-based way. And we didn't find it at Riverview.

You interviewed many Riverview parents, most of whom were self-described liberals who value diversity. Explain how White parents play a more active role than they are probably aware of in blocking progress on the achievement gap. 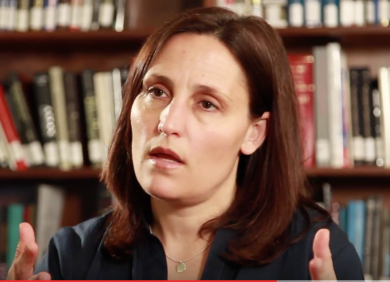 AL: Most of the White parents we spoke to explained the racial achievement gap in a way that made them not responsible at all for a situation in which their kids were getting advantages over other kids. We understand that people are grappling with real contradictions. Thinking about schools and making the right decisions for your kids is very challenging for parents. At the same time, part of the reason why we ended up understanding this as “opportunity hoarding” is the fact that not only were they passively accepting the way things were, but they were actually playing a role in making sure it didn't change. The long history of White communities protecting their advantages looks different across time, but is still happening in ways that we need to grapple with. When we talk about achievement gaps, everybody says, “What’s wrong with the Black kids?" but we need to reframe that and say, "Well, what are White families doing to protect their advantages and making sure their kids get more and better?"

JD: All parents just want what is best for their kids, but though opportunity hoarding, White parents create advantages for their own kids in ways that can disadvantage Black and Latino students and causes administrators to feel a little powerless to make the changes they think are necessary. For example, dismantling the tracking system or reducing the levels was very difficult at the school because there was a lot of resistance.

You mentioned that educators at the school were all pretty candid about what was going on. Was there a sense of powerlessness that they couldn't do anything, or were they waiting for the district to initiate major changes? What can educators do on an individual level?

AL: In large institutions, people feel responsible for the thing that is immediately in front of them, but often feel powerless over making more systemic change. I think educators can play a bigger role than they do and a lot of people are trying to do things to address the issue. We have an example in the book of the math teacher who saw there were very few African American and Latino students in calculus. He knew that unless you have algebra by the time you get to high school, you can’t get into calculus. The sequence takes too long. So he asked the school for resources - and they gave them to them – to offer geometry in the summer time. And a lot of kids who had done well in algebra in their freshman year actually took him up on it. Eventually he doubled and then tripled the number of Black and Latino kids in calculus. So there are teachers who are trying to do things differently, but it is hard to think about a concerted, across-the-board, institution-wide effort at a school like Riverview, where there are thousands of kids, hundreds of teachers and a very complicated administrative structure. 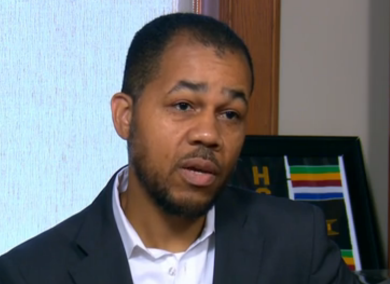 JD: Good teaching happens when people know their students and are reflective about how their own practices shape student outcomes. It's about thinking about what I'm doing at the school level - with the things that I can control - that have positive or negative implications for young people. That self-reflective stance is important and I think most teachers generally have it.

Conscious beliefs about equality or diversity can get overwhelmed in the moment-to-moment decision-making by unconscious or subconscious biases that people carry. All of us carry certain biases that we don't intend to. That doesn't make us bad people, it makes us humans living in a society where there is racism, sexism and homophobia that can shape how we interact with people - even if we don't want it to.

That's a key point of the book - that we tend to focus discussions on race on overt discrimination and not enough on outcomes.

JD: Right. Traditional kinds of racism are permeating our media right now and they are real problems that need to be addressed. But racial inequality is maintained by those day-to-day behaviors that are less individually motivated by animus. One of our challenges is – even in our legal approach – is that we too often focus on intention as opposed to the disparate outcomes and disparate opportunities that get created. In a school setting, it is about shifting that conversation: What does our practice looks like? What do our organizational routines look like around course placement, around discipline, and parental engagement that can that lead to the accumulation of inequality? But we have to discuss this in a way that doesn't blame or point fingers. There are no villains or heroes, but let's begin the process assuming good intentions on the part of people but showing that even good intentions can create negative outcomes.

AL: You always want try and help people think differently about race but thinking about behavior is important and thinking about the key structural mechanisms in schools that we can change that would have a big impact. It comes down to understanding that things have changed. Race still plays a big role but it plays a different role than it has in the past. If all we’re looking for is people who are using racial epitaphs, then we're missing the story.