How One Educator is Taking Ethnic Studies Mainstream

“Keeping students from learning about their own history is structural racism, " says teacher Jose Lara.

Thousands of high school students from Los Angeles, Calif., will benefit from a more diverse curriculum this year, thanks in large part to the efforts of Jose Lara, a social studies teacher at Santee Education Complex High School.

It started in 2013. As a school board member in El Rancho, he quickly worked to get a resolution passed to make ethnic studies a graduation requirement. The district is thought to be the first school system in the state to have made such a requisite. Now, the class of 2016 must take and pass an ethnic studies course before graduating.

With much success and support from the community, Lara formed the Ethnic Studies Now Coalition, which set out to make ethnic studies a graduation requirement in Los Angeles, which it did in 2014.

To date, more than five school districts have made ethnic studies a graduation requirement while 11 others have established a program or expanded an existing one. 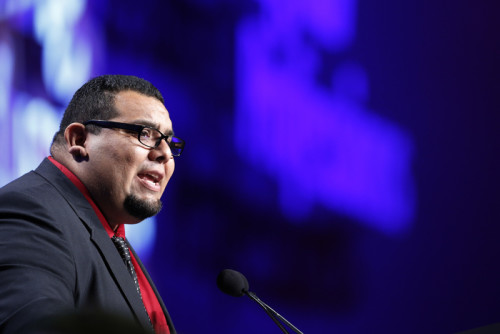 Ninety percent of the students in LAUSD, which is the nation’s second largest, are students of color, and it’s been important for Lara to help bring those voices into the mainstream—ethnic studies help to do just that.

“Keeping students from learning about their own history is structural racism, and as educators we have the responsibility to do something about it,” he said. “Ethnic studies is what anti-racist education looks like in the classroom. It is the unforgotten stories of brilliance and resilience of women and men of color that has systematically been kept out of our classrooms.”

Ethnic studies have been shown to highlight more positive sense of self, which helps to increase student social engagement, as well as improve academic performance. Additionally, it offers all students an opportunity to learn about more diverse experiences and perspectives.

While some districts in California have added ethnic studies to its course offerings, Lara hopes districts nationwide will follow suit.

Lara was recently awarded NEA’s Social Justice Activist Award for his work in educational justice. The award is given to an NEA member who demonstrates the ability to lead, organize, and engage educators, parents, and the community to advocate on social justice issues that impact the lives of students, fellow educators, and the communities they serve.

For more information on how to start an ethnic studies program visit the Ethnic Studies Now Coalition website.

In 2010, the Arizona legislature, spurred on by then-state school superintendent of public instruction Tom Horne, passed HB 2281, a bill that banned ethnic studies. The law forbids any courses or classes that, among other things, promoted “resentment toward a race or class of people,” was designed primarily for “pupils of a particular ethnic group,” or championed “ethnic solidarity instead of the treatment of pupils as individuals.”

Actually, the law was designed specifically to eliminate one of the most successful Mexican-American studies programs in the country, taught in the Tucson public school district.

On July 7, however, a federal appeals court cast the future of the ban into serious doubt. Ruling in Arce v. Douglas, (a lawsuit filed by students and educators) the court did not strike down the law, but returned the case to a lower court for a trial to determine whether the law and its subsequent enforcement were motivated by a racially discriminatory purpose. In particular, the appeals court noted that the law’s discriminatory impact on Hispanic students and racially charged statements by legislators and other officials surrounding the law’s passage could be indicative of an intent to discriminate.

The appeals court also affirmed a lower court’s ruling that the specific provision of the law prohibiting courses and classes “designed primarily for pupils of a particular ethnic group” is constitutionally overbroad. By cutting them off from certain materials and curricula, this provision violated students’ First Amendment rights, the court reasoned, and “threatens to chill the teaching of ethnic studies courses that may offer great value to students.” Unless the state can demonstrate convincingly that a pedagogical interest was being protected, it cannot control content to the degree the law allows.