Redland revitalized the overall school climate by responding to the unique needs of middle schoolers.

Every student deserves to learn—and every educator deserves to teach in a safe school. But zero tolerance school discipline policies, which were supposed to make schools safer, have done more harm than good, pushing kids out of the classroom and into the criminal justice system at unprecedented rates.

Add to the mix overburdened educators, cuts to school counseling programs, and police (often referred to as school resource officers), and you’ve got the makings of . . . well . . . a school-to-prison pipeline.

The term school-to-prison pipeline can ruffle the feathers of the most dedicated and caring educators, making it seem as if they’re personally responsible for thrusting students into the system.

Yet no one can deny the numbers. Across the country, school suspensions and expulsions, referrals to alternative schools and law enforcement, and school-based arrests have increased, blurring the line between the education and criminal justice systems.

Despite the systemic obstacles that have hampered progress nationwide, many educators and their schools are leading the way in adopting more positive, less exclusionary disciplinary practices.

Meet Lynn Harrison of Redland Middle School in Montgomery County. MD. You know you’re onto something good when your school goes from referring over 1200 students to the principal’s office to under 30 in just one year. “As a staff we were thrilled at the respect that was growing in our building,” says Harrison, coordinator of Redland's Positive Behavior Intervention Strategies (PBIS) program.

The PBIS process emphasizes constructive interventions as an alternative to punitive discipline. Redland, a bright, airy middle school with students who look like they’re happy to be there, has won an award for its efforts every year since starting the program in 2009.  Equally impressive, Redland’s referral rates broken down by student ethnicity are pretty evenly distributed among White, Black, and Hispanic students—unlike some schools that improve their overall numbers but still show disproportionate referral and suspension rates for students of color.

“Even though we didn’t have a high suspension rate,” says Harrison, “many students were being referred to the office and teachers were reaching frustration level. Referrals mean that students are not actively engaged in learning, which can result in suspension. We knew we had to be a lot more proactive about preventing negative behavior.

How did they do it? How did Redland reverse the numbers and revitalize the overall school climate? By responding to the unique needs of middle schoolers, says assistant principal Shenice Brevard. “Not only are middle school students different from elementary and high school students because of the physiological changes that occur during their middle school years,” explains Brevard, “they’re highly influenced by peers and media and these distractions can lend themselves to more disruptions in the school environment.”

To get a handle on the situation, Redland focused on setting expectations, building relationships, and engaging students. Harrison and Brevard share the award-winning strategies that have made the school a PBIS star. (To learn more about strategies for keeping kids in the classroom and out of the courtroom, view and download NEA EdJustice: Freeing Schools from the School-to-Prison Pipeline.

Employ peer mediators. Peer mediation is a positive behavior intervention that has worked well for us. School counselors train student volunteers to mediate incidents involving their peers. For example, a peer might intercede in a situation where two students were referred to the office for using inappropriate language during an argument. At this age, it helps students to have someone who understands where they’re coming from—someone who can relate to them and give them positive feedback. Sometimes kids come up with ideas to solve problems that adults wouldn’t think of.

Have fun with creative rewards. Our students earn “Bulldog bucks,” paper money with a picture of our school mascot, as a reward for positive behavior, like picking up somebody’s books in the hallway or helping another student solve a thorny math problem. All students have to do is follow our Respect School, Self, and Others motto. Bus drivers hand out three dollars for good behavior on the bus. Substitute teachers hand out two dollar bills to students who follow directions, help others, and show respect and responsibility. Teachers and other staff members hand out one dollar bills. When students earn enough money, they can shop in the “Dog Pound” (our school store), where they can buy everything from school supplies to apparel, like hats and tee shirts. Ninety percent of the items in the store are donated by parents, while the rest of the merchandise comes from PBIS grant money. Sixth and seventh graders love shopping in the Dog Pound, but we had to up the ante for older students, who use their Bulldog bucks to get into the Dog Pound Café, during lunch.  The Café is an eighth grade hangout with Wii, air hockey, a variety of board games and puzzles, couches, chairs, and a flat screen TV—all from donated funds. 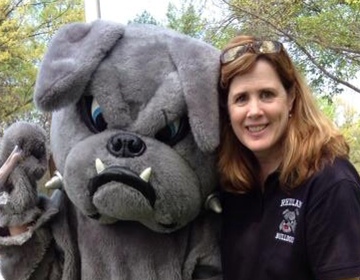 Match students with mentors. We have a year-long mentoring program for kids who are struggling behaviorally or academically. Grade-level team leaders match students with educators who volunteer to monitor and work with a particular student. If the student and teacher already have a great relationship, students are more likely to work hard for their mentor and strive to improve their behavior or grades. Members of Redland’s Instructional Leadership Team also work with mentees after school once a month to support academic achievements as well as build personal relationships. In addition, Redland runs a chapter of Courageous Young Men, a program that nurtures young men academically, socially, and emotionally.

Get student input on behavior contracts. Customized behavior contracts help keep some students on track. Rather than a long laundry list, contracts consist of just two to three goals that the students help to identify. If a student is an English Language Learner or receives special education services, we also get input from the educators in that department.

Teach social and emotional skills. Students have a 20-minute advisory period class each day after third period. Weekly lessons center on learning social and emotional skills, such as friendship, bullying, and conflict resolution and academic skills, such as organizing and good study habits. Each month, the lessons highlight a theme: one month, respect; the next month, responsibility; and the next, caring. During the other four days of advisory period, students can sign out and go see another teacher for extra help or work on their own work during that class period.

Work through minor incidents. Teachers are taught the difference between what warrants an MIR (minor incident report) and what warrants an automatic referral. When a student misbehaves, we file an MIR and follow a series of steps to address the issue. The first time a student doesn’t follow the code of Redland Respect, the teacher gives the student a warning and records the incident in MyMCPS, a web-based data tool that’s a one-stop portal for staff. The second time the teacher might have lunch with the student and perhaps notify the parents, as well as documenting the incident in MyMCPS. The third step is the same as the second. If there’s a fourth incident, the student is referred to our office administrators who meet with the student and phone home. If needed, we make mental health services referrals for students and parents.

Sign the Petition to Shut Down the School-to-Prison Pipeline