How Restorative Practices Work for Students and Educators

Take a look at what happens in public schools where educators care more about creating a community built upon kindness, not consequences.

A few Mondays ago, a Denver third-grader named Luca sat down in a circle with his classmates and started a conversation like this: “If you were an animal for a day, based on your mood and feelings today, what animal would it be?”

Funny! But the point of the circle conversations, also known as “peace circles,” which take place every Monday morning in every classroom at the K-8 Dora Moore School in Denver, isn’t giggles. It’s to build community and to foster the kind of student-to-student and educator-to-student relationships that lead to supportive classrooms.

Classroom circles are just one of the restorative practices that Dora Moore’s educators have adopted over recent years. Many of their students also practice their conflict-resolution skills in “peace walks,” and get regular, positive feedback through daily, one-on-one check-ins with dedicated, full-time restorative practices specialists on their campuses.

Often, this all takes place under the eyes of visiting educators who want to see and hear what happens in public schools where educators care more about creating a community built upon kindness, not consequences.

Dora Moore’s schoolwide enthusiasm and experience with restorative practices has made it one of three model schools in Denver, which, thanks to a three-year, $663,000 NEA Great Public Schools grant to the Restorative Justice Partnership (RJP), have welcomed hundreds of visiting educators from Minnesota to Mississippi.

In addition to NEA, the partnership includes the national Advancement Project and a local advocacy group called Padres y Jóvenes Unidos that in 2008 won a historic commitment from Denver Public Schools to eliminate racial disparities in discipline and focus on keeping kids in schools, plus the Colorado Education Association, the Denver Classroom Teachers Association, the University of Denver, and Denver Public Schools. 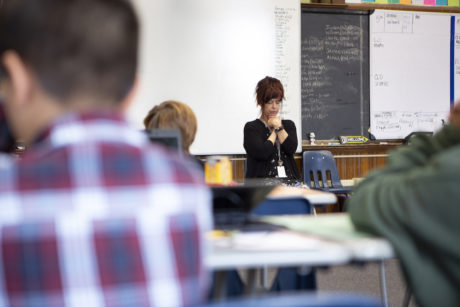 “These are organizations that haven’t always seen eye to eye,” notes RJP project manager Lindsay Lee. “But they are in agreement on this issue.”

As well as coordinating the school visits, RJP also has put together an online library of educator guides and resources, including webinars on restorative language and culture, how to align trauma-sensitive practices, and more.

Says Maryland high school teacher Erika Chavarria, who last year visited Denver’s North High School, another RJP model school: “The main thing that struck me, the thing that sums it all up, is the level of trust and respect in the building. It was very clear that students were trusted and respected [by educators], and it was very clear that—because the students received that level of trust and respect and love—they gave it in return."

Taking on the School-to-Prison Pipeline

Adopting restorative practices doesn’t mean no more suspensions, ever. Even at Dora Moore, North, or the third RJP school, Skinner Middle School, students still get suspended for serious offenses. But suspensions have decreased, as the petty disrespect that escalates into red-faced standoffs, or the squabbles that explode into violence, often are avoided or headed off by restorative practices.

More traditional punishments don’t work to change the root cause of misbehavior, or to keep students on a path to college and careers. “When I got here, the culture was to suspend and ‘kick ‘em out of my room,’” says Dora Moore principal Karen Barker, who arrived five years ago. But what do kids learn from that, she asked.

And who exactly is kicked out? “Zero tolerance” policies—suspensions, expulsions, and the more recent trend to police referrals or arrests—often are nourished by implicit biases and institutionalized racism, and aimed unevenly at black, Latino male, and American Indian students, as well as students with disabilities.

For example, while black students accounted for 15 percent of students in 2016, they accounted for 31 percent of school-related arrest and referrals to law enforcement, according to federal data. This forced march by students of color—from classrooms into courtrooms—is what’s known as the “school-to-prison pipeline,” and NEA members have committed to dismantling it.

At the RP schools, suspensions are a last resort. And, as they have decreased, an Advancement Project report has found that “indicators of achievement” have increased. 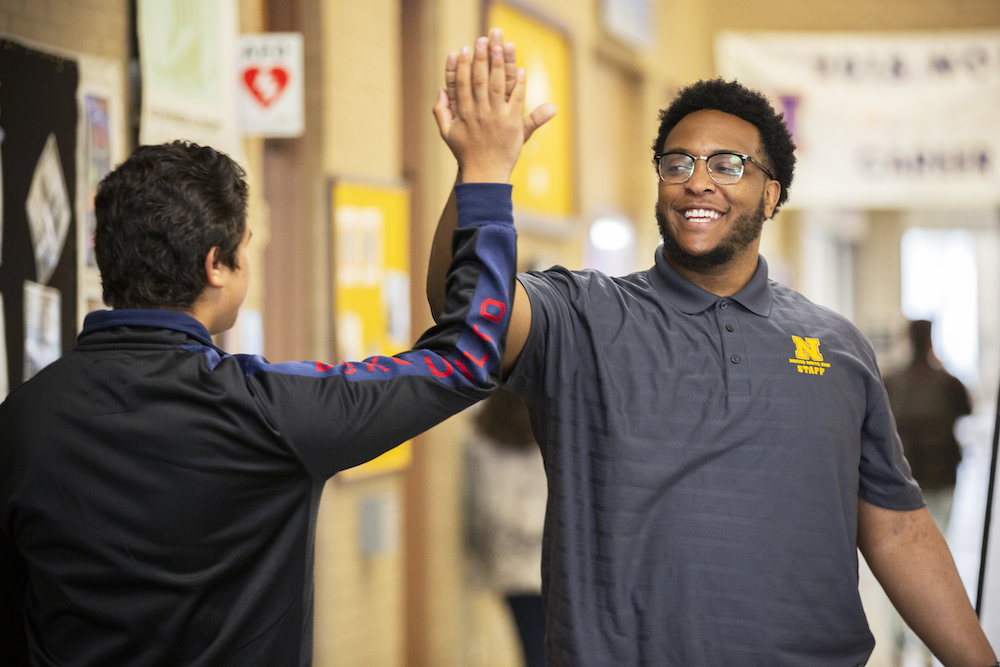 Inside an RJP School

When visitors come to Dora Moore, the first thing they see is the “tone-setting” that takes place in all classrooms, says Lee. In fourth- and fifth-grade teacher Sandra Lins’ classroom, this looks like Lins pulling a chair to the front of her classroom, sitting down to face her students, and saying, “Let’s get ready for the day.” It sounds like the quiet huffs of deep, calm breathing and the faint strains of classical music.

Last year, Dora Moore’s restorative practices coordinator, Morgan Isaacs, drew footprints and conversation prompts onto butcher paper that she rolled up and toted around school. This was the first “peace walk.” Since then, her template has been printed on dozens of vinyl tarps and distributed to classrooms, the playground, and the cafeteria.

The way it works is both parties in conflict—either two students, typically K-3, or an adult and student—step onto the mat and engage in a guided conversation. It always begins with an “I feel” statement, and ends with an agreed-upon plan to avoid future conflict.

Says fifth-grader Bradley: “I’ve noticed a lot of people have the same feelings as me."

Meanwhile, at North, visitors observe students entering school, walking past a Black Music Matters poster through the front office, where staff smile and greet every student, asking about their weekends, or after-school activities, or well-being. “They do that intentionally,” says Chavarria. “Right off the bat, you can see the level of love.”

She also observed trust: Every North student can leave campus for lunch, and has a longer-than-typical time for lunch. They also have free blocks of time that they can use as they see fit—maybe to visit North’s college center, or hole up in the art room with some therapeutic clay.

At North, students also have hands-on involvement in school discipline, doing peer-mediation and low-level restorative conferencing. They even sit on employee interview committees and if they feel like a job candidate wouldn’t be a good fit on their campus, they say so.

Sound too idyllic to be real? Both Dora Moore and North, as well as Skinner, have been engaged in restorative practices for several years. The changes to their school’s culture have not come overnight, and they require whole-school staff commitment—plus training, re-training, and funding for dedicated restorative practice coordinators. Building real relationships with students has to be top priority.

But it can be done, they say.