How Undocumented Students Are Turned Away From Public Schools

The law is clear, but some communities have blocked access using a wide range of 'intentional and unintentional' barriers. 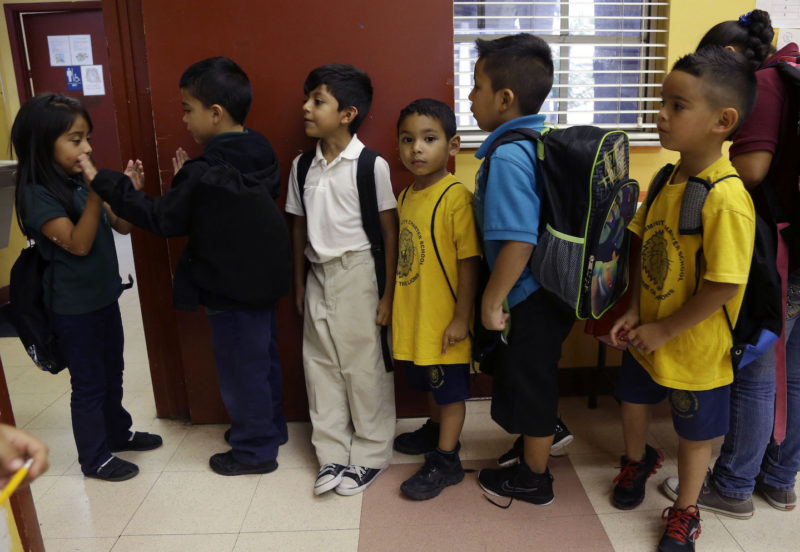 In the landmark 1982 decision in Plyler v Doe, the U.S. Supreme Court ruled all children are entitled to a public education, regardless of citizenship or immigration status. The fact that this is established law hasn't stopped some school districts from imposing obstacles to prevent many of the approximately 770,000 undocumented school-aged children in the United States from registering for school. The scope of the efforts to block this fundamental right is the focus of a new report published by the Georgetown University Law Center's Human Rights Institute and the Women's Refugee Commission.

"U.S. law is clear on this point - no child in the United States should be excluded from public education," said Mikaela Harris, a Georgetown Law student and co-author of Ensuring Every Undocumented Student Succeeds, "What we found is that that doesn't always play out in practice."

The researchers spent one year examining the practices and policies in school districts in Georgia, New York, but most closely in North Carolina and Texas. They interviewed government and school officials, families, and undocumented students to determine how some communities, according to the report, "have barred immigrant children from enrolling or meaningfully participating in school by creating intentional and unintentional barriers."  In some schools, students are turned away outright; in others, they are "discouraged" from enrolling.

But, as one social service provider told the researchers, “there is a fine line between discouraging and denying enrollment.”

The recent Immigration and Customs Enforcement’s (ICE) raids to detain and deport families who crossed the border in 2014 has fostered a climate of fear and anxiety that has prevented many children from even attempting the school enrollment process.

The families who do make this effort routinely face a wall of obstacles, ranging from delays over complicated paperwork to being turned away from classrooms as the result of a districts' subjective - and usually erroneous - interpretations of residency requirements and state laws. Meanwhile, a lack of translation and interpretation services leave families helpless and uninformed about the enrollment process.

The researchers interviewed "Juan," a 16-year-old who fled violence in Honduras to travel alone to Texas. Attempting to enroll, he was initially turned away by the school principal, who believed Juan would not pass the state test. Fortunately, the teenager had a community advocate by his side who could speak on his behalf. Juan was soon admitted, although he quickly discovered that the school was ill-equipped to provide the kind of one-on-one support he desperately needed.
Support Immigrant and Refugee Students: How are the raids and current immigration policies affecting your school community? Take the pledge and share your story.
The reluctance to enroll undocumented students out of concern that they will drag down the school's performance on statewide standardized tests is prevalent in some of the communities profiled in the report. One 17 year-old student recounted to the researchers that she was told that she could not start school until after exams, delaying her enrollment by four weeks.

Many schools also won't waver from overly rigid residency and guardianship requirements. And even if these requirements are met, many undocumented students who  have missed years of schooling in their home country are blocked because they are perceived as being too old. Because some districts examined in the report reward high graduation rates, school officials may be concerned that these students will "age out," or turn 21 before graduating. Instead, they will steer students to alternative education programs, including, but not limited to, those intended for children with serious behavioral problems, even if the student in question displays no such issues. One parent, appalled at the attempt to send her child to such a program, commented, “My son is of good character and he shouldn’t have to go to a school for correctional students.”

The report offers a wide range of specific recommendations for officials at the federal, state, and district level, including proper dissemination of legal information, a wide availability of effective translation services,  and increased oversight of ICE enforcement activities. The authors also urge that states take advantage of the new flexibility in the new Every Student Succeeds Act and reshape student and teacher accountability systems to be less dependent on test scores - and therefore less likely to incentivize exclusion of undocumented students.

A significant drawback is the scarcity of adequate information and training to assist communities with enrolling these students and complying with the law. Still, the intent to discriminate is clear in many cases, and curbing these violations must be a national priority.

“Discouraging undocumented children from enrolling or otherwise discriminating against them in the public education system contradicts our country’s fundamental values of providing equal opportunity for all,” said report co-author Caitlin Callahan.