Untangling perceptions about reading, learning and motivation is a challenge for educators and parents.

Brandon Brito is an African-American high school senior, honor student, and he reads—not only the required texts for his AP Literature class at Revere High School in Massachusetts, but also books he chooses, buys, and borrows for pleasure. Some may say, “That’s nice,” or “So what” about a kid of color who likes to read. Others would be convinced that Briton—and young Black men like him—is the exception when they consider the dismal, national reading scores that track Black and Hispanic male students at the bottom for reading proficiency (86 percent of African-American boys and 82 percent of Hispanic boys).

For African-American male students in particular, National Assessment of Educational Progress or NAEP data in reading has triggered alarms, even in the White House, as President Barack Obama launched My Brother’s Keeper, a national initiative to address what he calls “persistent opportunity gaps faced by boys and young men of color.”

That’s because educators and parents alike know that when students do not read and write, progressing through school will be difficult. But what Alfred Tatum, Ph.D., dean of the College of Education at the University of Illinois, Chicago (UIC), also finds troublesome is how this national reading report card data for Black male students has “framed a pernicious discourse” which concludes that these students who are underperforming in reading are likewise “disengaged from learning, lacking motivation, don’t like to read, and are doomed academically and in life if they are not reading proficiently by fourth grade. It’s complicated, adds Tatum and untangling “these things become major challenges for us as educators and parents.”

Instead, what should matter, adds Tatum, an expert on the literacy of African-American males in K–12 and a former Chicago middle school teacher, is “Black boys’ access to and relationships with text. It’s where teachers should focus.”

Revere High School English teacher Nancy Barile is applying that focus. In 2015, Barile was a participant in the NEA’s Teacher Leadership Initiative (TLI) when she made the support and advancement of young men of color at her school the subject of her TLI capstone project and the motivation for her intervention in the classroom. She called her program "Young Men of Color (YMOC)."

“I wanted to ensure that the YMOC would have culturally responsive support and safety nets for advancement through...high school and beyond,” says Barile who is using books as a foundation and employing what she calls “joy reading” as a bridge to reaching them.

The Iliad, Persepolis, Macbeth, and A Long Way Gone, are among required curriculum readings for Revere High sophomores. But when it came time for Barile’s students to read and be tested on the pleasure books she chose for the class, too many of her male students weren’t picking them up or turning the pages.

Barile’s solution—just ask them. Tatum agrees: “The selection of texts to use with African-American male youth matters. They want to know if the text is legitimate. Teachers have to tap into the voices of young boys; if they try to do it alone, they’re always going to miss the mark.”

Armed with her student’s literary wish list—cliffhangers, books on sports, race, life lessons, and about striving families just like theirs—Barile turned her ask into reality with the help of DonorsChoose.org. The arrival of boxes filled with new books like Fences, Gym Candy, and a Doll’s House, sparked a classroom celebration. But Barile scored really big when she again raised enough money to bring Michael Patrick McDonald, author of All Souls: A Family Story from Southie, to her students and school.

“They ate his book up,” says Barile of All Souls, set in a gritty Boston housing project and teaches the importance of being a survivor, not a victim.

Getting Hooked on Reading

As a little kid at the kitchen table, Brito, the Revere High senior, first devoured the words sprinkled across the back of his box of Fruity Pebbles before he lifted his spoon. He was reading, no less. Before long, Brito became “one of the best readers in class.” His first-grade teacher told him so and so did his standardized test scores. 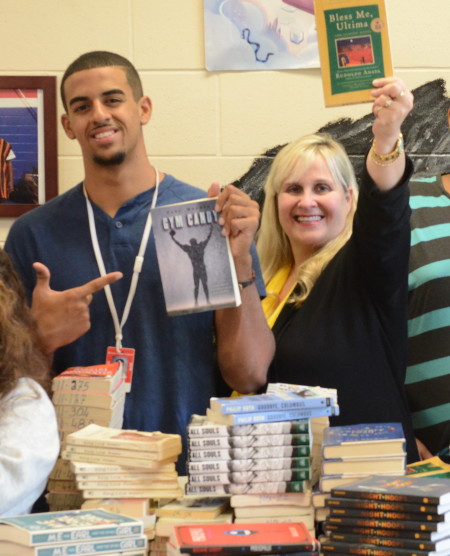 “At school, my teachers introduced me to more and more books and encouraged me to read and to write my own stories,” says Brito, now a student of Barile’s.

Words in comic books also courted this reader. They too helped launch Brito’s “big reading habit.” He was about 8 or 9 when he made the leap on his own to this chapter book, a gift from his mother. Brito delved into the Order of the Phoenix, the fifth and longest book in J.K. Rowling’s Harry Potter series. Nearly a decade later, Brito still sounds proud of this accomplishment. The book had heft and he turned all 875 pages. And he stayed up nights to follow Harry’s fifth year at the Hogwarts School and the harrowing challenges the boy wizard faced at every turn. “I couldn’t put it down,” remembers Brito, who has since made his way through the rest of the series and counts the books among his favorites.

Like his classmates in Barile’s AP Literature class, Brito spent the summer with Thomas Hardy’s Tess of the D’Urbervilles and Kate Chopin’s The Awakening. On a crisp fall day, Barile and her students reached back centuries into these two classics to explore the roots of modern-day feminism. Brito, Revere’s football captain is hyped and amazed—and learning.

Sometimes, Brito says, finding and losing yourself in a book, takes an engaging teacher and a compelling story for students to make a connection. And it happens at Revere.

“It’s great to see how these great works of literature tie into today’s society and help us understand why things are the way they are.”