The 3 big reasons thousands rallied for public schools in Indiana

Thousands of educators and students were joined by parents and other public school supporters at a rally to protest the states lagging investment in public education. 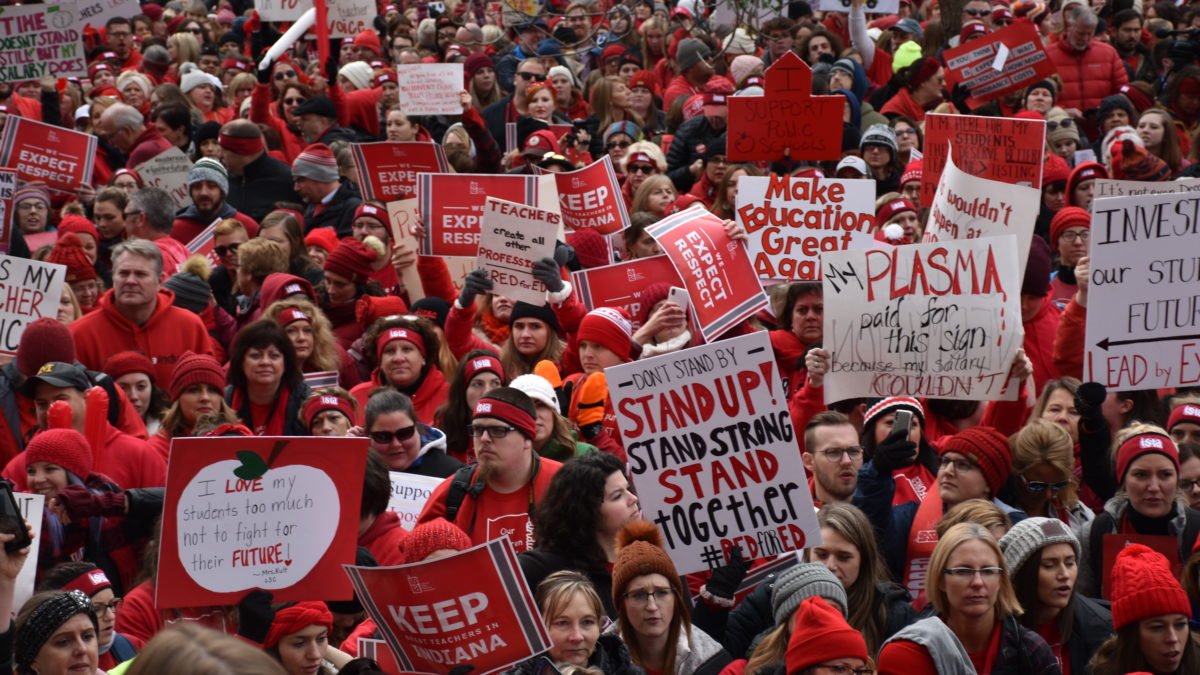 Indiana special education teacher Sandra Schurr sees the effects of underfunding every day at the rural middle/high school where she teaches.

“Our funding has been so drastically cut that we have lost several important courses such as art, art history, consumer science, marching band, German, French, and several other electives,” Schurr said. “All this loss is due to lack of funding.”

Thousands of educators and students from classrooms like hers were joined by parents and other public school supporters at a rally in Indianapolis on Tuesday to protest the states lagging investment in public education. As many as 20,000 may have been in attendance. It is believed to be one of the largest rallies in the state in the past 20 years.

More than 140 school districts across the state closed so that educators could speak out against lawmakers’ inaction. Indiana now ranks 47th in average per pupil funding, and 34th in average teacher salary, according to NEA’s Rankings of States and Estimates of School Statistics.

Republican Gov. Eric Holcomb is working with educators to prevent a work stoppage.

Yesterday’s event was the second major rally hosted by the Indiana State Teachers Association in 2019. In March, more than 1,000 educators gathered to ask lawmakers to invest in schools and raise teacher pay.

Here are the top three reasons thousands more rallied in Indiana in November:

While the state of Indiana has a $2 billion surplus, legislators have made no moves to invest more in education, educators, and schools. Over the last decade, Indiana’s average teacher pay dropped nearly $10,000, from $59,986 in 2000 to $50,554 in 2016. Some educators are fleeing to neighboring states—all of which offer higher pay.

Becky Pringle, vice president of the National Educators Association, received thunderous applause after saying, “enough of standardized tests” and that it’s “not okay” that the Hoosier State ranks 51st in the nation in terms of teacher salary increases.

Indiana ranks 47th nationally for per pupil education spending. Educators in Indiana feel that state budget policies need to be changed to benefit classroom learning and student achievement over administrations, and eight out of 10 voters agree. Currently, the average educator in Indiana spends $462 of their own money on school supplies.

“I do these things out of love for my kids and I don’t ask for a refund from anyone. But I think the community ought to know the real amount of money teachers are putting into their classroom, school, and kids’ overall education,” Ryan Knight, a music teacher in Indiana said, calling attention to the great lengths educators go for their students.

3. Like many states, Indiana has a severe teacher shortage

There is a shortage of teachers in fourteen different subjects, including math and science. Why? See points 1 and 2. Given Indiana’s low teacher salaries and lack of investment in schools, it shouldn’t be too surprising that new teachers are deterred from joining the profession and many educators choose to work in other states.

The Indiana State Teachers Association hosted the rally so that regardless of where students live, there is a strong public school with high quality teachers. The thousands that attended the rally at the statehouse also argued to improve staff development and eliminate barriers that dissuade qualified educators from remaining in Indiana’s classrooms.

“Although legislators didn’t take action today, we will be watching in January for bold action for our students,” said ISTA President Gambrill. “ISTA is just getting started and our members will not stop fighting for their students and profession.”