'Kids Shouldn’t Have to be Brave to be Themselves,' Says Award-Winning Educator 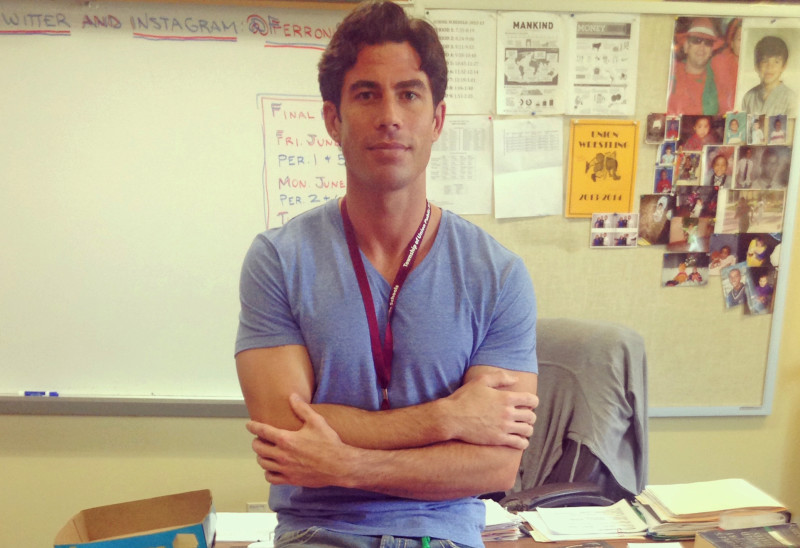 Not many public school educators have 23,000 Twitter followers, but not many have as high a public profile as Nicholas Ferroni, a history teacher at Union High School in New Jersey. In addition to being a dedicated classroom teacher for more than a decade, Ferroni has started programs such as “Practice what you Preach,” which deals with health and nutrition, and "Teach the Truth,” which advocates for more minority voices in history curriculum. Last week, Ferroni was awarded the Upstander award by the Human Rights Campaign for his work advocating for LGBTQ students. And if that wasn't enough, he was also named "Sexiest Teacher" by People magazine in 2014. Ferroni recently took some time out of his busy school week and talked with NEA Today about his work advocating for students and educators everywhere.

You have been in the classroom for 12 years now. What do you love about teaching?

Nicholas Ferroni: I love history! History is living. We are because of the events that happened yesterday. I also love dealing and interacting with youth on a daily basis. I truly believe there is no greater role than that of an educator.

Being named ‘Sexiest Teacher Alive’ by People Magazine raised your profile. How did it affect your work as an educator?

NF: The irony is, I was named most influential educator before that and no one knew who I was. The editor at People actually found me through my LGBTQ advocacy work. It has opened doors and given me the opportunity to use this platform to celebrate educators every chance I get. I have recently started working on a few T.V. shows that celebrate educators. I can’t talk too much about it, but it is a digital series that I am working on with People magazines and Soul Pancake. I want to use the celebrity I have and advocate for schools and all the amazing educators.

What inspired you to create your health and nutrition campaign, ‘Preach what you Practice’?

NF: I have always been into fitness. I also train some of my students outside of school. I use my platform to advocate when something is wrong, like when athletes advocate products that are unhealthy and use product deals to exploit youth. The Human Rights Campaign first heard of me through my advocacy on health and nutrition.

I have also found that fitness is a great way to for kids to deal with aggression. It teaches them life lessons like teamwork and commitment and helps them avoid trouble in school and suspension.

You are very active in promoting a positive learning environment for LGBTQ students. Why is it important that schools and teachers make this a top priority?

NF: All students should walk into school feeling safe. Many educators might believe it is not in their place to take a stand, but you can’t be silent supporters. I am a straight, Christian male advocating for the LGBTQ community. You have to be outspoken. Support saves lives. Educators save lives. Kids shouldn’t have to be brave to be themselves.

Your campaign, “Teach the Truth,” looks to incorporate minority perspectives into history curriculums. Could you talk about what inspired you to create such a program?

NF: In high school I was taught the textbook version of history. In college I learned there is one person’s side to the story and another person’s side and within those two lies the truth.

I believe we indirectly teach kids to be racist, prejudice and sexist, because certain groups are not covered in history textbooks. In history books, for example, the LGBTQ community is nonexistent until the 1970s. This tells students they have achieved nothing up until then. When students learn about other groups, they are more empathetic and passionate.

You just received the Upstander Award from the Human Rights Campaign, which celebrates people who recognize injustice and act on it. What does this honor mean to you?

I am humbled because there are so many worthy educators out there. It represents the work of the 3 million members of the National Education Association and what we do on daily basis.

All students must be able enter school every day confident enough to learn, which can be impossible in a hostile environment. It upsets me to hear kids hate school or hated high school.

So many of our education policies force too many people into caring only about test scores but I think we need to focus more on student relationships and connections. Inspiration is a huge art of teaching. My challenge for teachers is try to make some type of contact with every one of your students everyday. Many kids may go a whole day with out anyone acknowledging their existence.

You’ve already made such a difference in so many children’s’ lives and in the process have built yourself a platform to advocate for the issues you care about. What's next?

Hopefully, we’ll use the series I talked about earlier to reach larger audiences. Our goal is to change public opinion on educators. An actor who plays an amazing teacher gets paid at least ten times more than the amazing teacher they’re playing. These teachers give kids everything and they stay awake at night worrying about their well-being. I really would like 2016 to be the Year of the Teacher.