Pronouncing students' names incorrectly is a slight that can isolate students and affect learning. A new campaign is raising awareness of this often-neglected issue.

Taking the attendance at the beginning of class may seem a routine if not mundane task to many educators. But to students, their name can be a powerful link to their identity. Pronouncing students' names correctly - during attendance, a classroom activity, or any other time of the school day -  should always be a priority for any classroom teacher.

Names holds ancestral and historical significance for many minority, immigrant and English learning students. Names bring stories, which students are often forced to adapt to an "Americanized" context.

That transition, however, is often painful and forces many students to take on names that are not their own.

Yee Wan was only 17 years old when she moved to the United States from Mainland China. After enrolling in the bilingual program at her school, she was faced with the overwhelming and unfair decision over whether she would keep her native name or change it to something more “Americanized.” Why? So that educators would not struggle over the pronunciation. Wan later realized she had no choice but to take up the name her ESL teacher thought suited her. Her new name would be Winnie.

Years later, Wan sits as the current president of the National Association for Bilingual Education (NABE) and her personal experiences became the impetus for a campaign launched this year to spotlight the importance of student names. A collaboration between the Santa Clara County Office of Education (SCCOE) and NABE, My Name, My Identity  is calling attention to the potential negative effects of a mispronounced name and the ways schools and communities can defuse the problem.

"Mispronouncing a student's name truly negates his or her identity, which, in turn, can hinder academic progress," says Wan, who also serves as director of multilingual education services at SCCOE.

'A Tiny Act of Bigotry'

Overlooking or downplaying the significance of getting a name right, explains Rita Kohli, assistant professor of education at the University of California at Riverside, is one of those "microagressions" that can emerge in a classroom and seriously undermine learning.

"Names have incredible significance to families, with so much thought, meaning and culture woven into them," Kohli says. "When the child enter school and teachers - consciously or not - mispronounce, disregard or change the name, they are in a sense disregarding the family and culture of the students as well."

"A tiny act of bigotry," is how former teacher and education blogger Jennifer Gonzalez succinctly put it in 2014. In a post titled  "How We Pronounce Students' Names and Why It Matters," Gonzalez wrote, "Whether you intend to or not, what you’re communicating is this: Your name is different. Foreign. Weird. It’s not worth my time to get it right."

The effects can be long-lasting. In 2012, Kohli and Daniel Solorzano examined the issue in a study called "Teachers, Please Learn Our Names!: Racial Microagressions and the K-12 Classrooms." They found that the failure to pronounce a name correctly impacts the world view and social emotional well-being of students, which, of course, is linked to learning.

When a teacher- consciously or not - mispronounces, disregards or changes the name, they are in a sense disregarding the family and culture of the students as well" - Rita Kohli, University of California at Riverside

"Students often felt shame, embarrassment and that their name was a burden," Kohli says. "They often began to shy away from their language, culture and families."

Kohli points out that most educators are not doing so out of disrespect, but tend to be confined by a monocultural viewpoint that makes it "more challenging to center cultures outside of their own." Consequently, certain names sound unfamiliar and fall far outside their comfort zone.

Showing respect, however, doesn't necessarily require that an educator nails the pronounciation on the first attempt.  "We can’t say every sound or name in the world, but it is how we respond that matters," says Kohli.

Learn From the Mistake

At Iroqouis High School in Jefferson County, KY, where Mollie Robertson teaches math, English Language Learners will soon comprise almost one-third of the student population. For Robertson, every educator has an obligation to to promote equity and respect in the classroom.

"All students should have the opportunity to learn in a safe environment," Robertson says. "To fully accept and respect a student, you must at a minimum know how to pronounce their name."

Robertson adds that it's okay to make an error, "but it is not okay to ignore the mistake and not learn from it." 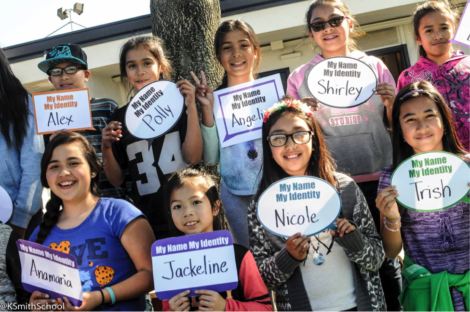 The My Name, My Identity campaign urges educators to honor their students by promising to learn how to pronounce their names correctly.

That's where My Name My Identity comes in. On the campaign's web site, teachers can access various resources on how to honor their students' names. The campaign looks beyond the classroom to ask all community members to make a pledge honoring their neighbors' and co-workers' identities. Students and their families are also invited to share the significance behind their name on the My Name, My Identity Facebook page, or by tweeting @mynamemyid.

While the focal point of the campaign is students' names, "My Name, My Identity" is about building a positive, inclusive school culture. With the teaching force still overwhelmingly White, the ability of educators with diverse classrooms to respect their students' identity is critical, says Kohli.

"All teachers need to reflect upon and interrogate their biases and any deficit thinking they may have. See the cultural wealth of students and families, and approach teaching and learning through the lens and culture of students and their communities."