Smaller class sizes are worth fighting for - but not if they are imposed by unfunded mandates that trigger teacher layoffs and unleash general chaos across school districts. 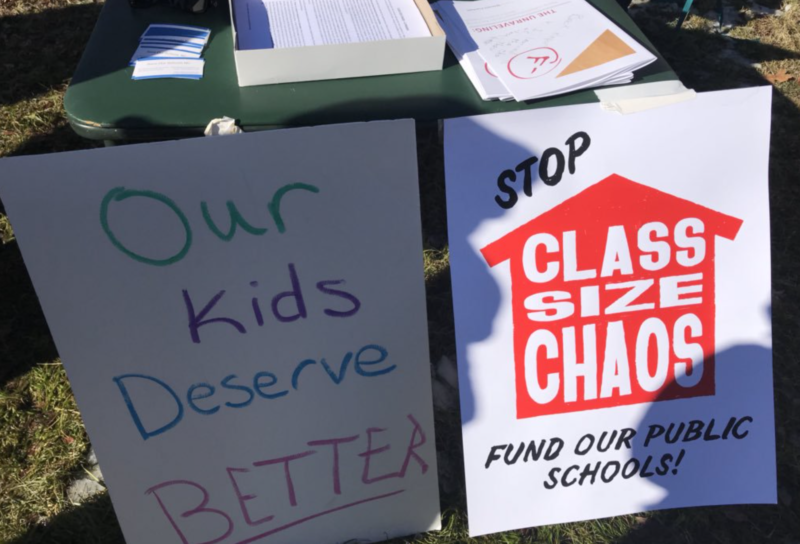 Educators across the country have been advocating for smaller class sizes for more than a decade because, as research has continually shown, class size is a key determinant of student outcomes. So when a state legislature actually passes a bill mandating smaller class sizes in every K-3 classroom in every district, that might be welcome news.

But if that requirement doesn't attach the necessary funding and imposes an inflexible timeline, the result - as educators in North Carolina can tell you - is nothing but chaos.

In spring 2016, the GOP-led General Assembly slipped a provision into a state budget bill that lowered maximum K-3 class sizes from 24 students to between 19 and 21 students, depending on the grade level. So far so good. But the new policy was slated to go into effect in the 2017-18 school year, giving districts precious little time to implement the mandate.

And the necessary funding to hire new staff and build new classrooms? That was nowhere to be found.

According to an analysis by the North Carolina Justice Center, fully-funding the necessary increase in staff (4,375 new teachers) would cost $304 million statewide - not to mention the additional tens of millions of dollars for new classroom construction.

Why would they do this? It makes sense when you couple this move with the push to privatize public education in the state. This is about creating chaos and disruption in our public schools, to make them look less desirable to parents" - Todd Warren, Guilford County Association of Educators

It was an unfunded mandate, said Mark Jewell, president of the North Carolina Association of Educators (NCAE), and compliance would force districts to make deep cuts to programs and staff. "That's what we call a false choice," said Jewell.

Lobbying from NCAE was instrumental in persuading the General Assembly to delay the mandate until 2018-19, but once again no additional funding was allocated. With the deadline looming, districts spent the better part of the school year scrambling to come up with plans to defray the costs and comply with the mandate.

To help pay for new teachers, districts were faced with placing so-called "enhancement" positions - arts, music, physical education, and technology teachers - on the chopping block. Without the money or time for new classroom construction, schools would have to resort to trailers or other temporary classrooms, including locker rooms or cafeterias to house students. Another option was packing more students into grade 4-8 classrooms to free up more teachers for K-3.

"The plan really threw us into budgetary and logistical chaos at the local level," says Todd Warren, a Spanish teacher in Guilford County, the third-largest district in North Carolina.

Just a case of lawmakers oblivious to the consequences of unleashing an unfunded mandate on a school system already wreaked by budget cuts? Not likely, says Warren, who is also president of the Guilford County Association of Educators.

"Why would they do this? It makes sense when you couple this move with the push to privatize public education in the state," explains Warren. "This is about creating chaos and disruption in our public schools, to make them look less desirable to parents who may be looking at that charter school down the street as an alternative."

The past seven years in North Carolina, says Kris Nordstrom of the North Carolina Justice Center, have seen the steady deterioration of the state's reputation for academic excellence.

"It's been dominated by a series of not just bad policies, but bad policies that are incredibly poorly crafted," explains Nordstrom. “Nearly all initiatives were moved through the legislature in a way to avoid debate and outside input from education stakeholders. The result has been stagnant student performance and increased achievement gaps.”

According to the 2018 Quality Counts Report Card released in January by Education Week, the state has dropped to 40th in the nation. As recently as 2011, North Carolina ranked 19th, the same year Republicans took control of the state legislature and proceeded to slash education spending (per-pupil funding has plummeted to 43rd, $3,000 below the national average), promoted unaccountable charter schools and school voucher programs, and eliminated due-process rights for teachers.

In 2017, the General Assembly passed another around of tax cuts, reducing the corporate income tax rate from 3 percent to 2.5 percent -  $100 million in revenue that could have been allocated to help schools adjust to smaller class sizes.

Against this backdrop, it's difficult to believe lawmakers were merely blindsided by the "unintended circumstances" of an unfunded mandate.

"They're just being more stealth in the way they create dissatisfaction with our public schools," says Michelle Burton, a library media specialist in Durham County. "Who doesn't want smaller class sizes, right? But they're just using a common sense position to cloud what was an unfunded mandate that was going to cause disruption and result in a lot of teachers losing their jobs."

Since the passage of the unfunded class size mandate in 2016, educators and parents in North Carolina have kept up the pressure on lawmakers to reverse course.

"Calling those key positions 'enhancements' makes them easier to cut. They're trying to make them somehow dispensable. But we know how important they are to a well-rounded education," Burton says.

On a brutally cold Saturday afternoon in January, Burton joined roughly 300 educators and parents at a rally in Raleigh, organized by NCAE and parent advocacy groups, to pressure the General Assembly to act. Public school advocates across the state joined the mobilization against the mandate, signing petitions, talking to lawmakers, and taking to social media to #StopClassSizeChaos.

Educators had an ally in Gov. Roy Cooper, who called the mandate "artificial class size change—one that shrinks classes on paper but in reality hurts students and teachers.”

"The pushback from NCAE and parent groups has been effective," says Warren. " I think some of the legislators began getting nervous about their prospects in the 2018 election if they didn't address the concerns."

Amid the mounting outrage, lawmakers, who had hoped to delay action until May, called a special session in early February to try to undo the mess they created.

“This body set fire to our public schools and now we are the firefighters,” said Sen. Jay Chaudhuri, who opposed the mandate.

On February 8, lawmakers announced a proposal to phase-in smaller class sizes over the next four years instead of lowering them at once in 2018-19. During that time, $61 million a year will be included to help school districts pay for art, music, and physical education teachers.

NCAE President Mark Jewell called the revision a step in the right direction that would, at least for the time being, allow schools to breathe a little easier.

"The phased-in plan has always been the more reasonable approach for local school districts, but whether the resources are adequate is still a question mark," Jewell cautioned. "This doesn’t address the other class size challenges in higher grades, and it doesn’t provide funding for much-needed school construction, which many local districts will find a significant challenge."

Jewell says any plan to reduce class size needs to be strategic, fully-funded, and involve educators at every step of the process. The issue is too important to be done haphazardly. "Class size affects all levels of the public education spectrum," he said.

Although North Carolina's public schools are still facing a largely unfunded mandate, Todd Warren believes the mobilization by educators and parents was critical in staving off the chaos that was on the verge of engulfing the entire system.

"Parents, teachers, NCAE, PTAs, and advocacy groups forced the General Assembly to take action that they otherwise would not have. Our organizing relationships and infrastructure are responding and growing more effective," says Warren. "We'll keep working and  redoubling our efforts."