Lawmakers in these 6 states are pushing to arm teachers

Putting more firearms in schools increases the possibility that a troubled student could get their hands on a gun as well as the likelihood of accidental shootings. 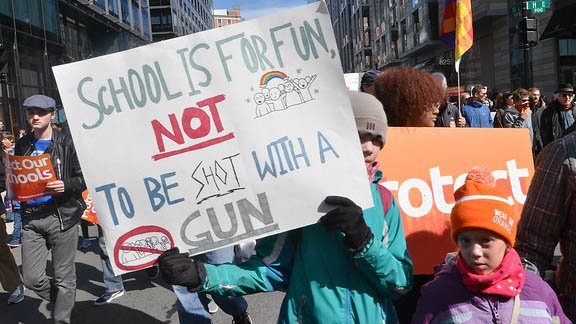 Columbine. Newtown. Parkland. These are some of the first places that come to mind when the topic is school shootings.

But every state in the union has had at least one incident of school gun violence since 1970, according to federal data. Most have had dozens. California and Texas have suffered well over 100.

Last year stands alone as the worst on record. Ninety-four incidents of school gun violence were documented, an increase of nearly 60 percent over the previous record high in 2016.

Sadly, some state lawmakers have spent this year’s legislative sessions trying to put more guns in schools. Most of their proposals involve arming teachers and other school staff (or increasing that number in states that already allow educators to carry guns).

Putting more firearms in schools increases the possibility that a troubled student could get their hands on a gun as well as the likelihood of accidental shootings. It also takes funding and focus away from strategies proven to make schools safer, such as:

President Trump and Education Secretary Betsy DeVos have backed the idea of arming educators. DeVos wants to use federal grant money intended for academics and enrichment to purchase firearms for teachers, even though the idea is widely rejected by educators.

A March 2018 Gallup poll found that 73 percent of U.S. teachers do NOT want to carry guns in school.

Here are the states where some lawmakers are still pushing to arm teachers:

The Florida Senate passed a bill this week that would allow any teacher who undergoes training to carry firearms into the classroom.

A group of about 150 students from the March for Our Lives movement protested the bill at the statehouse. The group was founded by students who survived the horrific 2018 shooting at Marjory Stoneman Douglas High School in Parkland, Fla., last February.

Missouri’s HB 575 includes a controversial—and frightening—amendment that legalizes concealed carry on college campuses. That means any student, staff member, or visitor with the right permit could walk around campus with a loaded gun. As written, the bill also forbids state colleges from creating their own policies to prohibit guns.

At a hearing on April 18, one person spoke in favor of the bill and 16 spoke out against it, including university students and faculty. The Missouri Education Association opposes the measure. Regardless, the House passed the bill and sent it to the Senate.

Earlier this month, the Montana legislature passed several bills that would result in more guns in schools. HB 567 allows any school employee to become a “school marshal,” which authorizes them to carry a gun on school grounds.

Lawmakers also approved a pair of bills that remove local authority to prohibit the concealed carry of firearms in public places, including schools. Only one of those bills could be vetoed by Gov. Steve Bullock; the other, a legislative referendum, puts the item on the ballot in November 2020. The Montana Federation of Public Employees President (MFPE), which represents the state’s teachers and other public employees, opposes those bills.

Related: MFPE President Eric Feaver gave passionate testimony against another measure, SB 304, which would allow legislators to carry concealed weapons in the statehouse.

A pair of bills could bring disturbing changes to North Carolina schools. HB 216 would allow school staff to carry concealed handguns in schools. SB 192 adds an incentive. That measure offers a 5 percent salary increase to teachers who undergo law enforcement training so they can serve both as educators and as sworn law enforcement officers.

The North Carolina Association of Educators has been outspoken in its opposition. “We’re currently ranked 50th in the country in addressing the psychological needs of our students,”  said NCAE President Mark Jewell. “We don’t need guns. We need more nurses, more counselors, more school psychologists.”

Oklahoma allows educators to have guns in school only if they have completed armed guard or reserve peace officer training. But HB 2336, an expansion bill, would allow any school employee with a concealed carry permit to walk the halls with a loaded gun.

Texas law already permits some school staff to carry guns. Now, the Texas Senate has approved a bill that would lift the requirement that school marshals keep firearms under lock and key. Another bill eliminates the cap on the number of marshals permitted on a school campus.

The Texas State Teachers Association opposes the expansion and says lawmakers should instead focus on improving school funding and mental health services.

Last May, eight Texas students and two educators were killed and 13 others were injured when a student opened fire at Santa Fe High School. It was only the second deadliest school shooting of 2018. Just three months earlier, the shooting at Marjory Stoneman Douglas High School resulted in 17 deaths and 17 injuries.

What you can do: