Idaho stands alone as the only state in the nation to utterly erase the established science of climate change from its classroom guidelines. 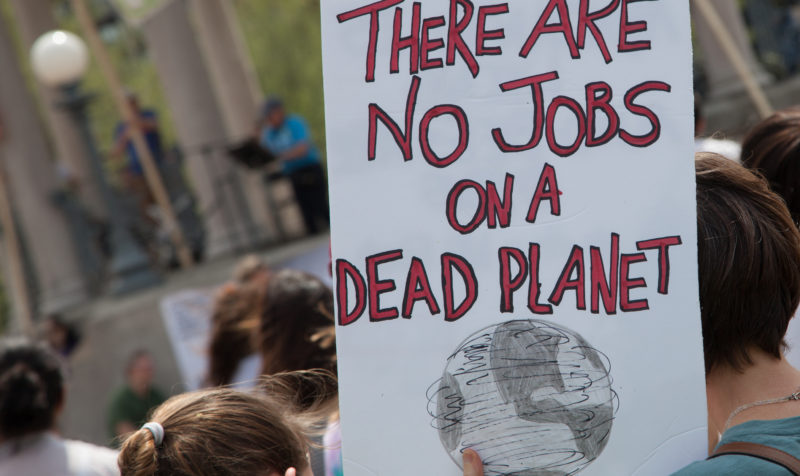 Idaho’s snowy mountains might be more green than white this winter, and its high-elevation trout streams may be growing too warm for cold-water species, but state lawmakers are working to make sure Idaho students won’t learn why.

This week, an Idaho House education committee voted—for the second time—to strip any mention of climate change from K12 science standards, despite overwhelming public support for standards that would teach students what scientists know to be true. With that, Idaho stands alone as the only state in the nation to utterly erase climate change from its classroom guidelines.

“I am confused—and concerned—at how they could turn a blind eye to so much public testimony,” said Coeur d’Alene science teacher Jamie Esler, who was a member of a statewide committee of teachers, parents, and scientists who developed the standards rejected by state House lawmakers on Wednesday. “If lawmakers are elected to represent the people who put them there, and they receive overwhelming communication from those people, this should not be a hard decision for them!”

What’s happening in Idaho is a good example of how climate change has become an identity issue, or a proxy for describing who you are, in terms of politics or moral beliefs. “These issues can be a way that communities describe themselves, to create borders between insiders and outsiders,” said Emily Schoerning, director of community organizing and research at the National Center for Science Education (NCSE).

Even as 97 percent of climate scientists agree that climate change is happening, and that it’s caused mostly by human activities, only about 30 percent of Republicans in the U.S. say they agree, according to the Yale Program on Climate Change Communication. In Idaho specifically, about 25 percent of Republicans say it’s mostly human caused.

Heating up in Idaho

The stage for Wednesday’s vote was set last year when Idaho lawmakers adopted a temporary set of science standards to replace their decade-old standards. (Standards are grade-level benchmarks or skills that students are expected to learn each year.) Although the standards approved in 2017 originally included of mentions human-caused climate change, lawmakers stripped every reference to climate change from the standards before approving them.

This year, the standards committee submitted a revised set of standards, which responded to lawmakers’ concerns. (For example, the revised standards say that, alongside human actions, “natural causes” also drive climate change.) While some science advocates called them watered down, Esler calls the revised standards realistic, given the political landscape in Idaho.

“Given the tight spot we’re in, we did the best we could,” he said. “The revisions maintain integrity around the science of climate, and I’m confident they would enable teaching of human-caused climate change.”

In recent weeks, 1,000 Idahoans wrote to the state Department of Education, which invited public feedback around the revised standards, and 995 of them urged adoption, state education officials told Idaho Education News. Additionally, during two days of public hearings in Boise last week, every one of 28 educators, parents, and students who spoke asked lawmakers to pass the revised standards in their entirety.

And yet, this week, despite the public outcry, in a vote that fell largely along party lines, the committee once again excised any mention of climate change from the revised standards. One Republican joined the committee’s Democrats in defeat, saying he wanted to support the teachers who spent about 1,000 hours writing the new standards. But the Republican lawmaker who led the anti-climate change efforts said he found the standards around climate change to be too “leading.”

He told the Idaho Spokesman-Review last week, “I don’t care if the students come up with a conclusion that the earth is flat – as long as it’s their conclusion, not something that’s told to them.”

According to Idaho Education News, some of the standards that were removed include:

“Current scientific models indicate that human activities, such as the release of greenhouse gases from fossil fuel combustion, are the primary factors in the measured rise in Earth’s mean surface temperature.”

Seventeen-year-old high school student Emily Her was one of the speakers in this week’s public hearings. In a subsequent email to the New York Times, she said, “The lack of these science standards is really just the deliberate censorship of facts.” Later, she added, “This is our future, and it’s in their hands.”