Looking for Community and Support, New Educators in Arizona Turn to the Union

A victory at the ballot box demonstrates the collective power of educators in the fight for better pay, lower class size, and professional development. 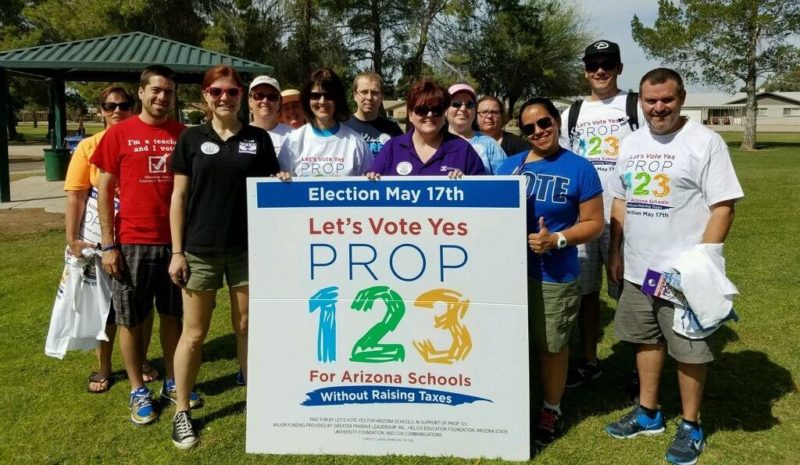 In 2016, Arizona educators led the fight to pass Proposition 123.

It’s tough to make a dollar stretch on an educator salary—especially a new educator salary. Many new educators in Yuma, Az., weren't sure how joining the union could change that—that is until they directly benefited from the collective power of the Yuma Education Association. Now many have recognized that they can’t afford not to join.

Last spring the union and its partners fought hard to pass Proposition 123, which will increase funding for Arizona public schools for 10 years. The law raises spending by about $300 per student and boosts educator salaries, which had been stagnant since the Great Recession.

At the start of the 2015 – 2016 school year, several months before the law passed, there were 19 members of the Yuma Education Association (YUEA). A year later, the number is at 90 and growing.

Joseph Daily is an active YUEA member who helped passed Proposition 123. He is always on the lookout for opportunities to talk to new educators about the importance of belonging to the union so that they can accomplish even more for students and schools. He finds that many new educators respond well to him because he can empathize with their struggles, both professional and financial. It wasn’t that long ago that he walked in their shoes.

Last spring the union and its partners fought hard to pass Proposition 123, which will increase funding for Arizona public schools for 10 years. The law raises spending by about $300 per student and boosts educator salaries, which had been stagnant since the Great Recession."

“It was right in the middle of the Great Recession when I got married and started having children,” says Daily, who has three kids now, all under the age of four. “Money got tight and membership dues were the first to go. I’d been a member for two years when I decided I had to drop it to save money starting in the 2010 school year.”

But even without dues expenses, money was still tight. And when he looked around, he realized that he was surrounded by educators who, like him, were woefully underpaid and stretched in a “million different directions.” Daily rejoined because he knew that without the union nothing was going to change.

“I rejoined the union because I believe that with the power of numbers behind us we could fight for better teacher pay, bring down our class sizes, get special training in various professional development areas, and much more,” Daily says.  “I joined because I also cared about my colleagues.  I hated seeing first year teachers leaving because they couldn't make ends meet money-wise or they didn't feel welcomed or supported. I joined to make a difference for those teachers so they will stay! I was born and raised in Yuma and it is a beautiful place to live, teach and raise a family.”

He talks to new educators about his own struggles with mortgage payments and the rising cost of groceries, but tells them he still pays his membership dues to belong to something bigger and to make an investment in his profession.

When it comes to the top priority of new educators, Daily says most people assume it’s salary, but he believes they’d choose more support over higher pay.

“We don’t go into this profession for the money. I think the main issue challenging our new educators is they’re not feeling supported,” he says. “I think our new educators want to feel like they belong here and have friends who are colleagues and can understand the same problems and successes that they are going through.”

That’s why he and his fellow YUEA members connect with each other and new educators at a personal level. It develops friendships, which is what Daily says a union is all about.

“We look out for each other and back each other up. We pick each other up during tough days, and we’re also here to celebrate the great days. With this kind of connection, new educators feel wanted and will join our union because they want what we have—a family.”

Faith Risolo, an organizational consultant with the Arizona Education Association (AEA), works closely with Daily and the other leaders of the YUEA. She says that what Daily and his colleagues are doing to recruit new members is working. She calls it the relational approach.

“Introductions are made at the building level and then new educators are invited to socials. Everyone brings along a colleague who might be interested in joining and they share stories and talk about the work of the union over quesadillas and beer,” she says. “It’s a young, energetic group. The oldest member is 42!”

“We look out for each other and back each other up. We pick each other up during tough days, and we’re also here to celebrate the great days. With this kind of connection, new educators feel wanted and will join our union because they want what we have—a family” _ Joseph Daily, teacher

Risolo says there is a “ton of turnover” in Yuma because of low pay but also because of where it is. Some of the schools in the district sit right on the border of Mexico and many English language learning (ELL) students are still learning how to ask to go to the bathroom in English, let alone learning to read in English.

Some educators work in farming communities with migrant populations. Students from the first quarter will suddenly disappear as they move with their parents to where crops are coming in, only to reappear in January. In classes sometimes as large as 40 students, it’s very hard to help returning students catch up.

Nevertheless, she says the new teachers see themselves vested in the students they teach and in the community and they want to stay, but they need better working conditions.
“Without organizing that’s not just going to happen,” says Risolo.

The turnover had gotten so bad that at the end of the school year, many students were asking teachers if they were coming back in the fall. In communities where home lives aren’t always stable, students must have a sense of stability at school, says Daily.

“We need to be there for them year after year,” he says. “The best way to keep our teachers here is to support them, and we do that by having a strong and loud voice. The best way to have that voice is by growing the membership of the union.”

Daily says YUEA is like a freight train. “We’re going in a positive direction and it’s getting heavier every day with new members joining. If you don’t want to join us, get off the tracks because we want only teachers who care about their profession, each other, and our students.”

Not only do the new YUEA members have a safe zone where they can talk candidly about their struggles and feel supported, they are continually learning about their career through professional development programs offered by their YUEA colleagues, with everything from classroom management and supporting ELL students to bullying prevention and navigating the evaluation system. More opportunities arise as new YUEA leaders emerge.

“This is a local NEA affiliate being energized by new teachers seeking a community of support and professionalism, and they are spreading the word to others,” says Risolo, who calls Yuma her happy place. “They’re message is simple: Take a chance with us, and let’s make a difference in public education.”