What it’s like to be on the receiving end of slurs and stereotyping, and what educators can do about it.

Seventeen-year-old Entsar Mohamed is proud to be Muslim, but she admits it isn’t easy.

“Being a Muslim in America today is getting harder and I am worried that it will get worse,” says the senior at Mission High School in San Francisco, Calif. “Because of ISIS, Muslims are seen as bad and violent people.”

Anti-Islamic rhetoric has reached a fever pitch in America, spouting not only from presidential candidates and governors, but even from school board members, like one in Philadelphia who posted that she is “officially against Muslims” and “We don’t want them in America” on her Facebook page.

For Muslims who ride city buses—including hundreds of school kids—the message was loud and clear: “Muslims are terrorists and must be feared.”

“It’s scary, unfair, and weird how we are in the year 2016 and people are allowed to be so openly biased and hateful,” says Mohamed Omar, 18, a senior at San Francisco’s Raul Wallenberg High School. “People look at us in a damning way, they have this image of us that’s hard to change, and it bothers me that Pamela Geller can have freedom of speech, but where is my freedom of religion?”

Not surprisingly, Islamophobia from the larger society filters down into our schools. More than half of California’s Muslim students have experienced religion-based bullying, a rate double that of their non-Muslim peers nationally, according to a study of the California chapter of the Council on American-Islamic Relations.

Fakhra Shah, a teacher at Mission High School, knows first-hand what it’s like to be on the receiving end of anti-Muslim slurs and stereotyping. A Muslim who grew up in the Bay Area, she’s experienced them her whole life. One of her goals as an educator is to prevent bullying by teaching tolerance, which she does by demonstrating it, accepting perspectives, and creating a warm environment where all students feel loved and accepted.

“Growing up, I remember having to constantly start conversations with people about how ‘not all Muslims are...’ That’s a pretty terrible way to get to know people or make friends,” she says. “I still remember having to defend myself to my seventh-grade social science teacher who wanted to embarrass my religion and background in front of the entire class. I definitely stood up for myself but was completely shut down by her and had no place to turn. I would never want any of my students to have to be humiliated or disgraced in that way.” 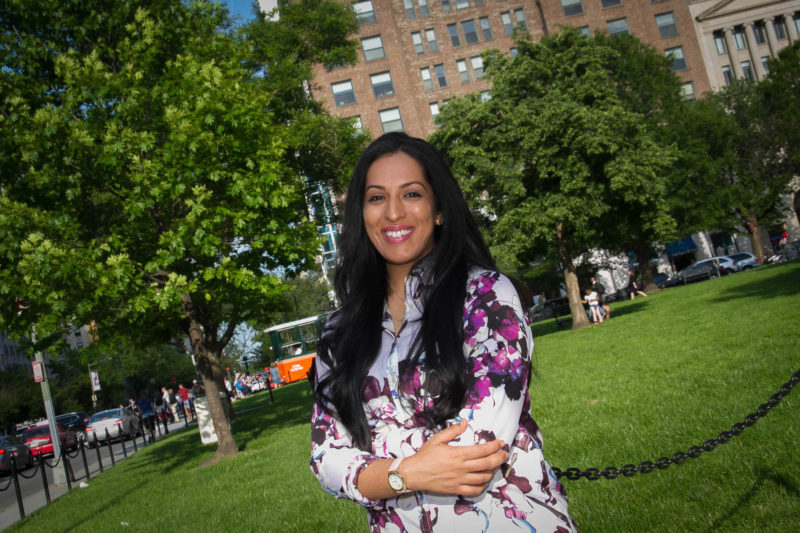 Shah teaches a unit on Islamophobia in her Social Change and Critical Thinking class and starts with a personal anecdote to illustrate how easily misconceptions arise.

The anecdote is about one of her students proudly offering Shah a taste of her lunch, which was pork and a staple of her Filipino culture. Shah thanked the student but said she doesn’t eat pork.

Shah explained that most Muslims around the world do not eat pork, to which the student responded. “You’re Muslim? But you don’t look like a Muslim!” She thought Muslim women wore a hijab or dressed from head to toe in black burkas.

“I use that story to introduce the following facts,” says Shah.

• There are over 1.5 billion Muslims in the world. With 7 billion people in the world, that means about 23 percent of the world’s population are Muslims.
• Muslims are diverse as people and in their practices. Some of us cover, and some of us do not. Some of us pray five times a day, others might not practice or offer prayers as regularly.
• What’s most important here is that not all of us are Arab. I am not Arab, my parents came to the U.S. in the 1970s from Pakistan. I was born here, so I am an American Muslim.

Shah shares her Islamophobia lesson plan online and also suggests that educators tackle the topic of religious extremism by promoting religious literacy. Her lesson explains what it means to be Arab, Muslim, and Sikh, and why Arabs and Muslims are not the same thing.

For more resources, visit teachingtolerance.org and enter the keyword Islamophobia in the search field.

She also leads discussions, with openings such as “Not all Muslims are….”
She says she finds that students can identify with that phrase, especially when they talk about other groups, like “Not all Black people are….”The lesson not only raises awareness, but allows all her students to feel more acceptance and understanding.

Educators have an immense role in helping youth feel safe and accepted,” Shah says. “We can make or break their experiences. We have a huge responsibility, and the number one part of that responsibility is compassion. None of us is perfect, neither educators nor our students, but all of the students want to feel safe and accepted and we can definitely work hard to give them that much.”

It’s 6:45 a.m. I wake up at the sound of my alarm, which I snoozed for the fourth time today. I brush my teeth, pin my hijab in place, and rush downstairs to go to school. Almost out the door, my parents wished me goodbye with what has become the norm: “Be careful of your surroundings.” I stopped getting the “Have a good day sweetie” a while ago. Now I just have to be careful, because I could be attacked. Because I could be the target of hate speech. Because anti-Muslim bigotry is my reality.

BREAKING NEWS: Republican presidential candidate and party front-runner Donald Trump is calling for a complete and total shutdown on all Muslims from entering the United States. This was the breaking point. I always felt that prejudice existed towards Muslims in America. As a young woman who wears the hijab, how could I avoid it? I feel the insolent stares I get in the streets. I feel the snarky remarks made under strangers’ breath. I feel the isolation. But I would have never projected such intolerance to reach this extent. I never expected this feeling to overcome me. So I decided to investigate where it came from.

There is no worse feeling than feeling unwelcome in your own home. But despite the false perceptions and unfounded stereotypes I face every day, I refuse to be out casted. America is my home; in fact it’s all I’ve ever known. - Hannah Sharim

I am part of the Ulysses program at Northwest High School in Germantown, Md., where students in a smaller-learning community pursue independent research projects over the course of their four years. We are required to complete a final research project our senior year, and with my understanding of the current perception of Muslims, I studied the media’s propagation of Islamophobia in American society.

There were three components to my research: interviews, surveys, and case studies. I found that the media’s terminology in reference to Islam and the Muslim populace holds tremendous effect on how they are perceived. When atrocities occur in the name of Islam, the media is quick to call it an act of terrorism, which reflects poorly on Muslims. But when atrocities occur from white supremacists and far-right thinkers, excuses are made for them and less vivid language is used to describe their crimes. After presenting my findings to a class full of students and staff, the room stood in pure bewilderment. Everyone who approached me afterward had the same thing to say: “I didn’t know.” They were shocked that words like “terrorist” and “jihadi” had a broader impact on Islam than just personifying proclaimed Muslims who commit acts of terror. But why is it so difficult for a distinction to be made between the acts of extremists and the rest of the peaceful Muslim population? The answer lies in the xenophobic rhetoric exhibited by Donald Trump.

There is no worse feeling than feeling unwelcome in your own home. But despite the false perceptions and unfounded stereotypes I face every day, I refuse to be out casted. America is my home; in fact it’s all I’ve ever known. I was born here. I was raised here. I celebrate the Fourth of July. I sing the national anthem with insurmountable pride. I hang the American flag outside of my front door. And, I plan on staying here for generations to come. I love this country, my country, because I love what it stands for.

I was blessed with the opportunity to live in a land that was founded on the basis of freedom in all forms. A land that embraces freedom for every race, religion, and gender. Donald Trump’s proposition is not only unconstitutional, but also un-American. His bigotry goes against every fiber of the American fabric. It extends beyond Muslims; it challenges the fundamental principles that make America great.

The issue here is not a singular Donald Trump, but rather the American citizens rejoicing at his deranged dogma. This poison infiltrating the minds of American citizens is administered by Trump-like characters and solidified by an underlying layer of ignorance. To eradicate it, we must refuse to hold an entire faith liable for politically motivated acts. To eradicate it, we must allow American Muslims to feel welcome in our home, America. As an American, I will not stand to see the rancorous poison called fear extend any further, and neither should you.

Reprinted with permission from the Council on American-Islamic Relations