Saul Ramos, a one-to-one paraeducator and braillist in Worcester Public Schools, honored for helping students succeed in school and in the community. 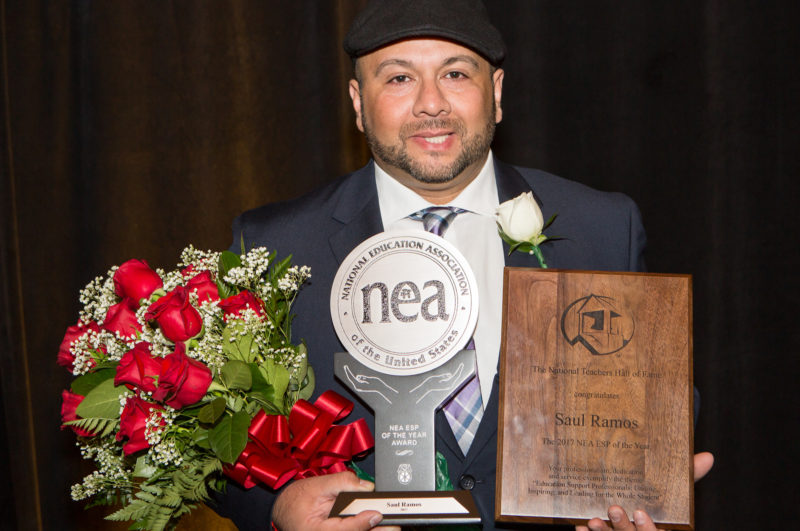 Like many multi-skilled people with a wide range of interests, Saul Ramos is hard to peg. While Ramos has demonstrated his ability as a paraeducator and union leader within Worcester Public Schools in Massachusetts and nationally through NEA, he has had an equal impact directing local art projects and adapting Shakespeare for theaters in various New England communities.

Yet, for all his talents, those who know Ramos best say his greatest accomplishment to date may be the life-changing effect he had on a single child, a visually impaired student he worked with from kindergarten starting in 1999 until the student graduated from high school in 2011.

After 18 years, the self-taught braillist currently serves at Burncoat High School transcribing school materials and classwork of visually impaired students into print or braille, a writing system in which characters are represented by patterns of raised dots that are felt with the fingertips.

Ramos was named the 2017 National Education Association (NEA) ESP of the Year during the awards banquet March 11 at the NEA Education Support Professionals Conference in Dallas, Texas. The annual award is NEA’s highest for ESP.

“I admire Saul and am inspired by his dedication and thoughtfulness,” Massachusetts Teachers Association President Barbara Madeloni said. “He is looked up to as an educational leader for his commitment to his field, as well as his expertise. He is in fact the symbol of just how essential ESPs are to meeting the needs of the whole student.”

At the event, NEA President Lily Eskelsen García presented Ramos with a trophy, bouquet of roses, and $10,000 check.

“NEA applauds Saul and his commitment to helping students succeed in the classroom, in school and in the community,” said Eskelsen García. “He is a shining example of the ESP who work tirelessly to make great public schools for every student.”

Approximately 2.8 million school support staff work in the nation’s public school systems, with more than 75 percent living in the school communities in which they work. More than 900 school support staff and other educators from across the country are participating in the 26th annual conference, which ends today.

The conference theme, Uniting, Inspiring, and Leading for the Whole Student, set the tone for the dozens of workshops and discussion sessions which focused on NEA’s goals and priorities including engaging early career educators, racial justice in education, and ensuring that the voices of educators are reflected in implementation of the Every Student Succeeds Act (ESSA).

Ramos is a member of four MTA committees: ESP, ethnic minority affairs, bylaws and rules, and the Equal Opportunity Council, of which he is vice chair. An advocate for English Language Learners and special education students as well as the visually impaired, Ramos was honored last year at Fenway Park during a professional baseball game as an MTA Red Sox Most Valuable Educator.

Within NEA, he is a member of the Paraeducator Institute Work Group, Sexual Orientation and Gender Identity Committee, and is the Northeast regional director of the Hispanic Caucus.

A recent graduate of the prestigious ESP Leaders for Tomorrow program, Ramos mentors new ESPs and has attended many national conferences and training sessions as a facilitator.

In Worcester, Ramos helps to “ensure that his students are fully integrated into their school environment as a means for them to become as independent as possible in social and other settings,” Madeloni states.

“I know that with a lot of patience, understanding, and guidance, my students are capable of accomplishing anything any other student can,” according to a recent media interview Ramos provided.

Ramos spent his childhood growing up between Worcester and San German, Puerto Rico, where he was born and graduated from Laura Mercado High School in 1995.

“I am a mixture of my mother’s Spanish heritage and my father’s African and Taíno (an indigenous people inhabiting the Caribbean and Florida) heritage,” Ramos has stated in media reports. “I am a passionate advocate for keeping our culture alive and making sure our community, especially our youth, are in touch with their roots and embrace the beauty of it.”

Ramos has created awareness of Latino culture by founding the nonprofit Arte Latino of New England where he serves as artistic director. He is also co-executive director of the Providence Latin American Film Festival in Rhode Island. The newly elected mayor of Providence recently appointed Ramos to the transition team for education, arts, and culture.

“Art is one of the greatest ways that humans can express their whole spirit,” Ramos says. “I hope that all educators will remember that among their students, they may have a budding artist that should be challenged and motivated to explore their craft.”

Working with the Rhode Island Latino Arts organization in conjunction with the historical ECAS Theater in Providence, Ramos helps to produce Spanish-language and bilingual theater through live performances, workshops, and other forms of cultural expression. For example, last summer, he adapted into Spanish and English Shakespeare’s “Romeo and Juliet.”

“We are helping adults and young Latinos discover hidden talents, build self-confidence, and solidify their cultural and individual identity,” Ramos says. “We need Einsteins in this world, but we also need poets, photographers, writers, carpenters, musicians, and painters.”