For more than a decade, students and educators in Michigan haven't gotten what they need in their classrooms. Fed-up educators are asking for more. 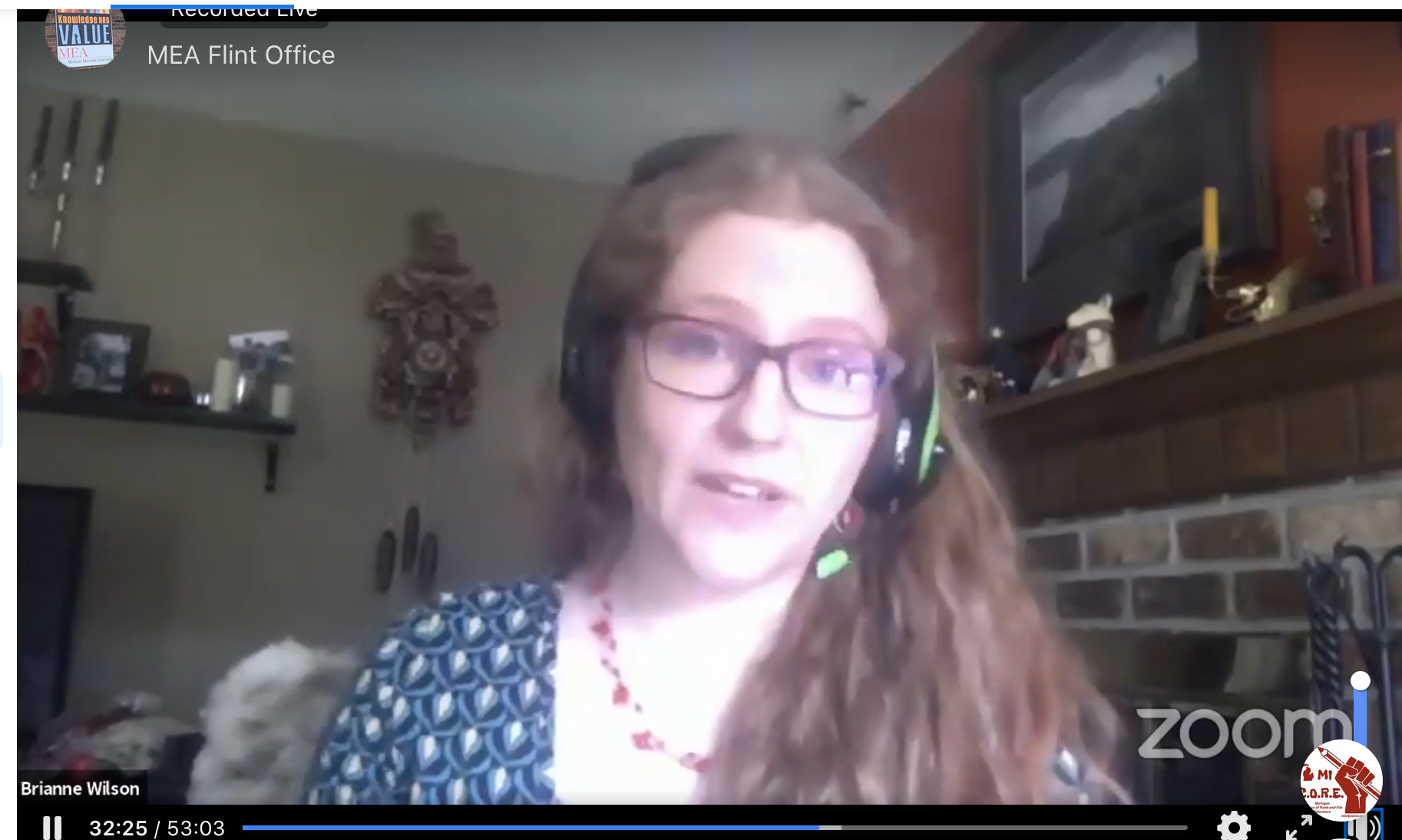 Michigan high school teacher Brianne Wilson thought she knew what it meant to be a student who lives in poverty. “I have bought students food, clothes, tampons, school supplies, stamps—any public school teacher knows this list. And seeing this lack of supplies, I thought I knew how poverty affects kids.

“And then one of my students became my daughter,” she recalls.

Then I learned what it really means to grow up in poverty in Flint.”

When her daughter, whose biological parents had died, first came to live with Wilson and her husband, the teenager told her how nice it was that the water in the shower didn’t make her skin itch. Her hair stopped failing out.

“I had this simplistic view of poverty, like it was parents who couldn’t afford to buy stuff for their kids,” says Wilson. But it’s parents who can’t read with their children because they’re working days and nights. Parents who can’t afford medical care. For years, Wilson’s daughter suffered daily with chronic back pain from an untreated injury suffered in a car accident.

A Crisis of Will

Almost everybody has heard the story of Flint’s water. In 2014, state-appointed managers of Flint decided to stop buying the city’s water from Detroit and instead pipe it out of the contaminated Flint River. Residents immediately noticed a terrible difference in smell and taste, but state officials told them to “relax.”

Their decision exposed nearly 30,000 schoolchildren to a neurotoxin that is detrimental to brain development and nervous systems. Between 2015 and 2019, the percentage of the city’s students who qualify for special education services doubled, to 28 percent.

But that district has nowhere near the necessary resources to provide those students with the support that they need, including school nurses, social workers, and psychologists. And it’s not just Flint. Across the state, for more than a decade, state lawmakers haven’t been providing adequate funding to any Michigan public schools, says Wilson.

In 2010, Michigan ranked 15th in the nation for its per-pupil expenditures, according to NEA Rankings and Estimates, with about $11,000 spent per student. But by last year, thanks to a decade of willful neglect by state lawmakers, Michigan had fallen to 40th, and actually spent less — about $10,700 — per student.

Meanwhile, the percentage of students living in poverty in Michigan has been rising. In 2019, more than half of Michigan students lived below the federal poverty line. They need more support—not less—from lawmakers.

“We’ve been underfunded for decades,” says Michigan high school teacher Diane Aretz. But educators are determined to make a change.

The current COVID-19 pandemic didn’t cause Michigan’s funding crisis—but it has worsened it. To reopen schools safely, school districts need to invest in safety equipment, sanitation supplies, PPE, and more. Federal money from the CARES Act has been helpful, but it’s not enough, say Michigan Education Association members.

Michigan educators are asking their Senators to support the HEROES Act for continued federal support, and also leaning on state lawmakers.

In August, MEA hosted a virtual event about safe schools and education funding that involved U.S. Senator Gary Peters (D-MI); U.S. Rep. Dan Kildee (D-MI); state Sen. Jim Ananich; and state Reps. John Cherry, Tim Sneller, and Sheryl Kennedy, a former educator. “Just know, teachers,” said Kennedy, “we understand you’re on the front lines and you’re going to give your best — but we need to make sure that we’re asking of you is realistic and safe.”

Wilson also spoke to the group, sharing the story of her daughter’s adoption and of how the lack of funding in Michigan schools affects all children, but especially students living in poverty.

Michigan educators are getting organized, said Aretz—through their union and also through a grassroots organization called Mi CORE. This summer, educators held two protests in Lansing, focused on state proposals to cut school funding by an additional $700 per student. “[The budget proposal] was unconscionable — and impossible to even think of what that might have meant for students, especially in poor districts,” Aretz says.

Lawmakers heard them, and instead passed a measure that maintains school funding at current levels. And even though those levels still aren’t good enough, “It felt like a win,” says Aretz. “We’re connecting with each other and building something powerful.”