Is Middle School Too Early for Students to Lose 'Top Dog' Status?

According to a new study, 6th graders experience less bullying and do better academically at schools with wider grade spans. 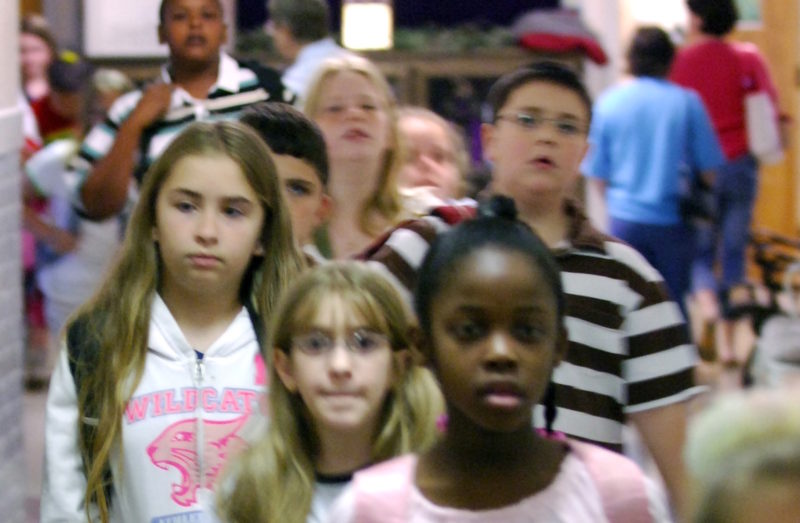 The middle school years are a notoriously challenging time for many students. The transition from elementary school to middle school can be brutal for an 11 or 12-year-old, who is already navigating through a vulnerable and awkward age. Grades often suffer and it's during middle school that many students are first exposed to threats and bullying.  Easing this transition and addressing these issues has been an ongoing and herculean task for educators and parents.

According to a team of researchers from New York University and Syracuse University, however, there is something inherent in the structure of a middle school that makes life more difficult for the average sixth grader. While many factors over the years have been cited to explain the challenges these students face, Michah Rothbart, Amy Ellen Schwartz and Leanna Stiefel argue that closer attention be paid to the "top dog/bottom dog" phenomenon.

An 11-year-old entering a 6-8 middle school loses the "top dog" social status she had at elementary school. Suddenly, that student is a "bottom dog." Already at an anxious period of her life, this student is now facing a change in status that can trigger academic and social drawbacks.

But are these drawbacks also experienced at the same level by a sixth grader at a K-8 public school, where they are more likely to be "top dogs"? The answer, according to the new study published by the American Educational Research Association, is no.

"The top dog/bottom dog phenomenon is real and significant," says Michah Rothbart, an assistant professor of public administration and international affairs at Syracuse University.  "It affects both student experience of the learning environment as well as academic achievement. It is not just about being new, but also something particular about one's relative social position."

While previous research into the academic and social climate of middle schools has addressed the top dog/bottom dog hypothesis, Rothbart says this study is the first that finds "causation, not just correlation, that specific position in the school impacts student experiences."

“The top dog/bottom dog phenomenon is real and significant. It affects both student experience of the learning environment as well as academic achievement. It is not just about being new, but also something particular about one’s relative social position” - Michah Rothbart, Syracuse University

The scale and scope of the study also sets it apart.

Over the course of three years, Rothbart, Schwartz and Stiefel tracked data and student surveys from roughly 500 public schools in New York City, covering 90,000 students in grades 6-8 in schools with different grade spans - 6-8, K-8 and 6-12. The data they analyzed included student perceptions of bullying, school safety, and general sense of belonging, along with state assessments of academic achievement.

What they found was that 6th grade students felt safer and did better academically in the K-8 public schools. Why? Because they were still "top dogs." Schools with longer grade spans prevented students from becoming "bottom dogs" and facing the social and academic pitfalls that can go with that status.

The researchers were able to rule out factors such as new student status and student height and weight as possible causes of negative school experiences.

Bullying remains a serious problem regardless of what kind of school a 6th grader attends. For example, almost 25% of sixth graders at K-8 schools responded that students threaten or bully other students at school "most" or "all" of the time. Still, that's an improvement over the one-third of sixth grade students who feel that way in 6-8 middle schools.

That's a significant difference, Rothbart points out, especially when you consider that it's not a result of a targeted intervention to reduce bullying.

"We're not suggesting that administrators should ignore the benefits of such interventions," he adds, "but we are suggesting that structural changes can make the work easier."

At some point in an academic career, a student has to experience being a "bottom dog" but it's a status perhaps best delayed until a student is a freshman in high school, when  he or she is developmentally more suited to meet the challenges of being the youngest in the building. Until then, Rothbart says it advisable to let students remain "top dogs."

"Our results suggest that middle school student experiences could be improved by structuring grade spans so they are longer and put students of these awkward ages closer to the top."

Overhauling school structure, however, is a controversial and enormously complex undertaking and Rothbart cautions against interpreting the study merely as a clarion call to get rid of middle schools. If a community, on the other hand, is in a position to potentially rethink their schools' grade spans - Boston is currently looking at switching over to six-year high schools - the negative consequences associated with the top dog/bottom dog phenomenon should be given serious attention.

Still, reorganizing grade spans may not be feasible for a host of reasons, but schools should still acknowledge that student status is shaped by their grade and take appropriate steps to neutralize the harmful effects.

"Schools should attend to this phenomenon by helping new students assimilate and supporting students as they navigate the inequalities brought upon by social status," says Rothbart. "And parents should also be attentive to their child’s relative position in school and help them deal with some of the difficulties of holding bottom or middle dog status."