"This is happening right in the heart of our community," says special educator. "People are afraid, they’re in pain, and we needed to help.”

There were bright spots in Minneapolis amid the chaos and pain. Like the residents who came out at daybreak with shovels and brooms to help clean up. Or the demonstrators who covered George Floyd’s memorial with tarps to protect it from the rain. And the thousands of residents from the entire Twin Cities area who answered the call for food donations at Sanford Middle School, just three blocks from the Minneapolis Police Department 3rd Precinct, ground zero of protests, fires and looting.

Neighborhood stores were closed in the unrest after widespread anger from a video that showed Floyd saying he couldn't breathe as a white police officer held him down on the pavement with his knee on Floyd’s neck, an officer who has since been charged with murder.

Nearly 200 businesses were burned or looted, including groceries and convenience stores the community relied on for their basic needs. Recognizing that need, the school’s family liaison sent all Sanford Middle School staff an email asking for them to reach out to friends and family for 85 food kits for student families to pick up at the school.

Word spread quickly. A call for 85 food kits grew to an outpouring of what’s estimated to be 30,000 bags.

Cars and trucks lined up for miles to drop off bags of food and groceries. There were bags of fruits and vegetables. There were mountains of cereal boxes. Piles of ramen and macaroni and cheese. Towers of toilet paper packages and diapers. Countless canned goods. More food and essentials than any of the Sanford organizers ever dreamed possible in one day.

A second drop off point was opened at nearby Longfellow Park to accommodate the donations that quickly covered the grounds of Sanford’s campus.

'We Needed to Help'

“It’s been hard on our students, during the pandemic and then this, and I knew some of them had been out there getting tear gassed and were afraid,” says Sanford Middle School special education educator Jabari Browne. “This is happening right in the heart of our community, and I wanted to help in any way I could. People are afraid, they’re in pain, and we needed to help.”

After assisting colleagues send out a call on social media, even getting a retweet from comedian and actor Michael Rappaport, Browne set out early the next day to help collect donations. What he didn’t expect was having to help direct traffic. But he was prepared from a previous job at a well-known amusement park.

“I got there at 9:40 and there were already hundreds of cars,” he says. “I’m from Orlando originally and worked at Universal Studios. The skills I learned directing lines of people at the 'Wizarding World of Harry Potter' really kicked in.”

A Great Moment Where People Could Be Happy and Relax

Later that day, Browne drove to a women’s shelter to drop off donated diapers and feminine hygiene products and got stuck in traffic on the way back. He thought it was from streets being blocked for protests, but it was from the food drive at Sanford that was still going strong. Hundreds were donating bags; hundreds more were picking them up for their families. 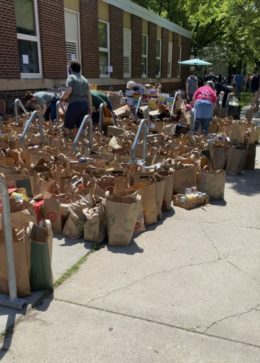 “Just seeing the smiles, especially the kids. It was a great moment where people could be happy and relax during such an uncertain time, after being so fearful of what might happen when the sun goes down,” he says.

Schools take care of their communities, Browne says, and the food drive was an example of how educators come together to support each other, their students and their families even in the most chaotic and complicated of circumstances when nobody knows what will come next. There were families who’d been cautioned that they might have to leave the area temporarily because of how dangerous the situation could become.

“Our kids are in need, they are hurting,” he says. “A lot of the hurt isn’t new. This has been going on a long time.”

But, he says, there’s hope for the future.

“We hope for more love. We want everyone, no matter what race or background, to love each other, respect one another and be kind, especially in the schools,” Browne says. “We have one purpose – to educate our kids, and help them to grow up and be better than us.”