Despite government mandates to test water quality, educators, parents, and district staff should work with local policymakers and water companies to conduct their own testing. 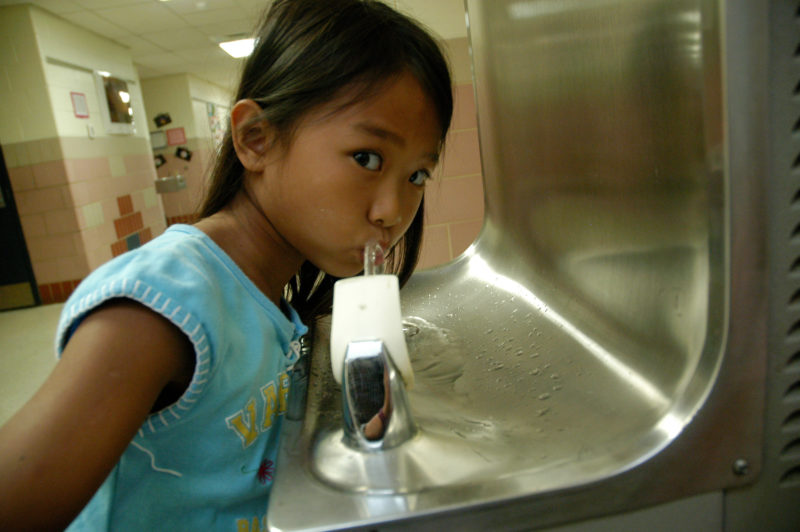 “Given the circumstances taking place across the country, we knew we had to ensure the highest quality of drinking water is accessible in our schools, even though there are no local, state or federal laws mandating districts to do so,” said Lane in a press statement.

In September, families across the district received a letter in the mail with their local school’s results. Out of approximately 4,700 water samples taken at district facilities, three percent (141) tested positive for lead levels above 20 parts per billion, which is the maximum legal level set by the Environmental Protection Agency involving water that is safe for drinking or cooking.

Of those that tested positive, 14 were water fountains. In addition to testing lead levels, district staff replaced problem fixtures and installed new filters and 300 bottle filling stations in schools throughout the district.

Without government mandates to test water quality in schools, it is advisable that educators, parents, and school district staff work with local policymakers and water companies to conduct their own testing, according to Matt Edgell, a regional advocacy director for the Pennsylvania State Education Association (PSEA).

“Pittsburgh Public Schools is a perfect example of why schools across the nation need to monitor their own water quality,” says Edgell, who served as a teacher for 22 years.

After unhealthy lead levels in tap water were detected among homeowners, Pittsburgh Mayor William Peduto announced in March that the city was working with Peoples Gas and the Pittsburgh Water & Sewer Authority (PWSA) to invest $1 million to provide filters to every PWSA customer to reduce high lead levels in their drinking water.

By the time of the mayor’s announcement, PPS facilities had been meeting the water needs of students, educators, and staff for at least six months.

“They averted a health scare in Pittsburgh by monitoring their own levels,” Edgell added. “Exposure to lead and other water contaminants is a health concern, especially for children and infants.”
Why It’s Important to Monitor Water Quality in Schools
- Thousands of public schools and licensed childcare facilities are not regulated under the Safe Drinking Water Act (SDWA) and therefore may or may not be conducting voluntary drinking water quality testing.
- Most lead gets into water after it leaves the local well or treatment plant and comes into contact with plumbing materials containing lead.
- Low levels of lead in blood have been associated with behavioral problems, learning disabilities and impaired growth. Very high blood lead levels can cause severe neurological problems such as coma, convulsions and even death.
Lead Poisoning in Children

There is no safe lead level in children’s blood. And, unfortunately, at least 4 million households in the U.S. have children in them who are being exposed to high levels of lead, according to the U.S. Centers for Disease Control.

Children run the risk of a variety of effects:
• Damage to the brain and nervous system.
• Slowed growth and development.
• Learning and behavior problems.
• Hearing and speech problems.

All of which are known to cause decreased ability and performance in school.

These effects can be passed from a pregnant mother to her baby, affecting the baby’s brain, bone, and other organ development. This happens even if the mother was exposed to lead years before the pregnancy.

What’s less known, but is even scarier, is that the effects of lead poisoning may be passed down through generations. In a study by Wayne State University researchers, published in 2015 by Scientific Reports, scientists found that not only do mothers with high levels of lead in their blood pass along telltale DNA markers to their own babies, but that those cells also are passed to their babies’ babies—their grandchildren.

“You have to think of a pregnant woman like a Russian doll. She's the outer layer, and her baby is the middle layer, and this next baby is the inner doll," said Wayne State’s Douglas Ruden, the lead researcher, to the Detroit Free Press. "When Mom was born in 1985… her eggs that won’t be fertilized for 20 or 30 years are damaged."

From the Environmental Protection Agency:
What You Can Do To Maintain Clean Water at Your School

• Determine whether the school is a public water system (PWS). A PWS is a system that serves water to 25 or more of the same people more than 60 days per year, or a system that has 15 or more service connections. Most schools are usually part of a larger PWS but smaller schools in rural areas can be their own PWS.

If a school is a PWS, it must:
• Comply with all primary drinking water regulations and applicable underground injection control requirements;
• Notify students, staff, and parents if the system fails to meet primary drinking water standards;
• Ensure that only lead-free pipes are used in either installation or for repairs; and
• Comply with all state program requirements and EPA inspections.
If the school has its own water supply system, check with the system operator to ensure that the system is in compliance with drinking water regulations.
• Review the school's files for plumbing surveys that identify areas of high risk for lead sources. If these records do not exist, or if significant plumbing modifications have been made since the last survey, conduct a plumbing survey as soon as possible. For help conducting a plumbing survey, see EPA's 3Ts for Reducing Lead in Drinking Water (104pp, 2.5M) manual.
• Maintain drinking water taps by routinely cleaning faucet aerators and disinfecting drinking water outlets and water fountains.
• Compare the school's drinking fountains with those identified on EPA's list of known lead-containing models. Make note of any fountains that are on EPA's list and take them out of service.
• Review the school's files on lead test results for drinking water taps. If testing records do not exist, or if testing has not been conducted within the past 5 years, collect and analyze samples from drinking water taps. EPA's Lead in Drinking Water website provides guidance on conducting lead testing in schools.
• Lead concentrations at all drinking water taps should be below 20 parts per billion (ppb) for a 250-milliliter sample. This concentration applies only for schools whose water supply is provided by a municipal system (i.e., a PWS). For schools that have their own well or water source, lead concentrations at 10% of drinking water taps must be below the EPA action level of 15 ppb. These schools must test for lead and be below the lead action level to comply with the National Primary Drinking Water Regulations.