Accountability for charter schools isn't a priority for state lawmakers in Tennessee. Nashville educators and parents have different ideas. 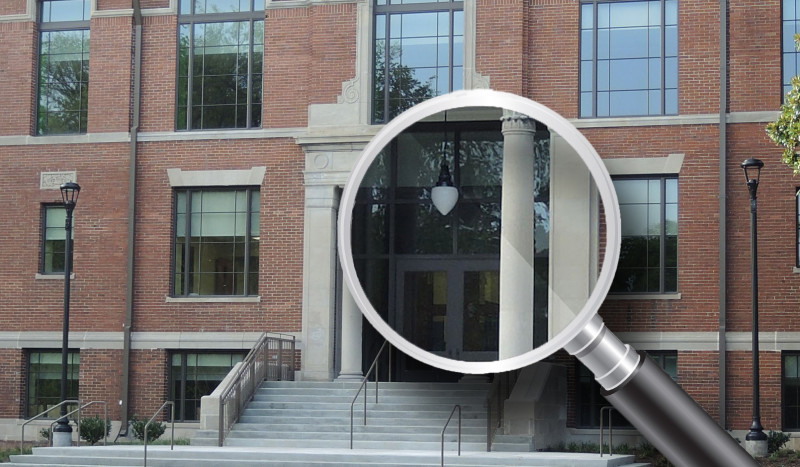 Since he was first elected to the Nashville Board of Education in 2012, Will Pinkston has been a vocal and tenacious advocate against the proliferation of charter schools. According to the operators who have rolled into the city over the past couple of years and their allies in local government, he is unapologetically “anti-charter.”

Not so, Pinkston insists.

“I'm not anti-charter. I have voted to approve some charter schools,” he says. “Now, what I am against is these new schools chewing up every dime of available new revenue at the expense of traditional public schools, their students and their teachers - especially when they are not held to basic, common sense standards of accountability.”

Pinkston attracts a fair amount of local press for his outspoken and often blunt criticism of the way charters do business in Nashville, but he is hardly alone in sounding the alarm over the consequences of unabated charter growth. His colleague on the board, Amy Frogge, has worked tirelessly to spotlight what she calls "charter school games" that obscure shoddy fiscal and academic records. And a thriving movement of educators, parents and other members of the community are standing up to demand a greater level of charter school accountability.

“Charters aren't going away,” says Amanda Kail, a teacher at Margaret Allen Middle School. “But we need to do everything we can to help make them the best schools. So the public needs to bear in mind that many of these schools are not working for students and are wasting taxpayer money and we need to figure out ways to make them better.”

This past spring, Kail testified before the school board to urge adoption of accountability standards created by Brown University’s Annenberg Institute for School Reform. Under each of the seven Annenberg standards is a set of concrete policy and practical recommendations applicable to state legislatures, charter authorizers, and communities. The target is the waste, fraud and abuse in the charter sector. The goal is greater transparency, equity and other forms of accountability to students, parents, communities and taxpayers. 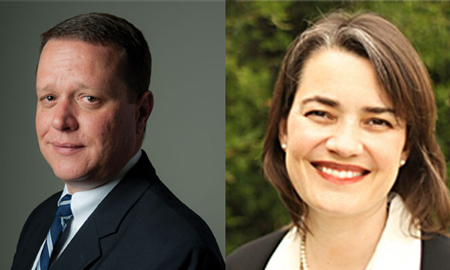 Nashville school board members Will Pinkston and Amy Frogge

(The National Education Association supports most of the specific recommendations and has been promoting attention to the Annenberg document to inform and stimulate local and state level discussions about the charter sector's impact on communities and how specific concerns might be addressed.)

In early May, the Nashville board, which oversees charters as their authorizer, passed a general resolution to adopt the standards, with the understanding that they would immediately be subject to a legal review to determine their compatibility with state law. After a thorough appraisal, the board followed through on June 16 and voted to codify a majority of the standards and recommendations, with plans next to embed them into existing policy and work on actual implementation.

One week later, the board voted to approve only two of 14 new charter school applications.

Few expect the charter industry - flush with cash and powerful allies in every corner of state and local government - to take all this lying down. Nonetheless, the board, backed by parents and educators, has taken an important step and sent a loud and clear message, says Metropolitan Nashville Education Association (MNEA) President Erick Huth.

“We have established the first set of legitimate, independent standards by which the Metropolitan Nashville Board of Education will judge charter school expansion. This is a major victory.”

‘The Most Toxic School Reform Environment in the Country’

In 2010, the entire state of Tennessee had 10 charter schools. By 2015, the city of Nashville alone had 27. The GOP-controlled legislature – supported by a conservative governor - has passed a series of laws that have cleared hurdles for charter operators to open schools in urban areas, Nashville especially.  According to Pinkston, scrutiny and transparency doesn't serve the agenda of the power brokers behind this rapid expansion. 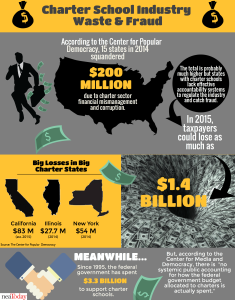 Waste and Fraud in U.S. Charter Schools (Click to Enlarge)

“There are people in Nashville and in Tennessee who want to destroy public education,” he says. “And the way they have chosen to do that is to push for unabated charter growth and tear down a lot of people who have pushed back. We have become arguably the most toxic education reform environment in the country. And it has had to do with these ill-conceived state laws and the bad actors who are behind them.”

In 2014, an audit commissioned by the Nashville Metro Council confirmed widespread suspicions that the runaway growth of charters was having a destabilizing effect on the school system’s finances. Most, if not all, new revenue is earmarked for new charters. Neighborhood schools are now forced to fight for a rapidly dwindling share of taxpayer dollars in a chronically underfunded school district (ranked 54th out of 67 urban school systems in per-pupil funding, according to the Council of the Great City Schools).

And then there's the case of Boys Prep, who shut its doors in 2014 amidst allegations including, but not limited to, manipulating enrollment data to siphon off more taxpayer dollars. Are there other charter schools in Nashville that are - or could - engage in the same sort of impropriety? Maybe, but it has been difficult to ascertain. Amy Frogge was elected to the school board in 2012 determined to pry information from the so-called Office of Innovation, who manages the city's charter schools. But the office has thwarted her efforts with one bureaucratic roadblock after another. 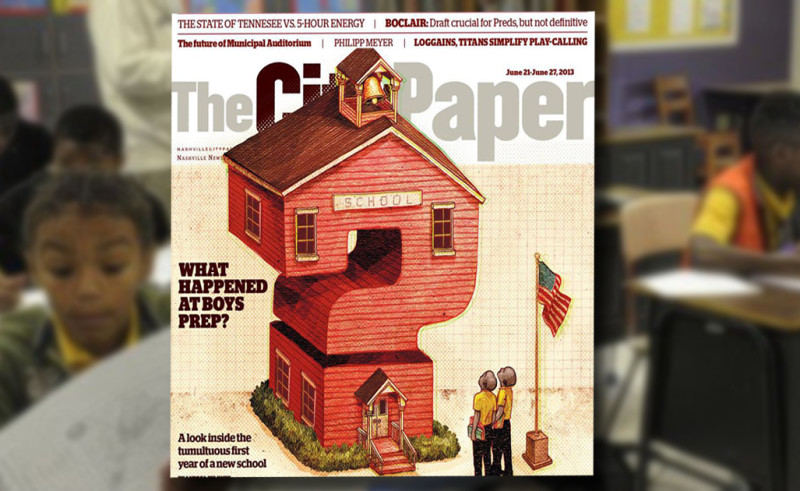 Alleged enrollment data fraud was just one of the issues that caused Nashville's Boys Prep to shut its doors in 2014.

“It’s been frustrating to say the least,” Frogge says. “The board has very little visibility into what’s happening in the operation and the budgets of charter schools.” Implementation of the Annenberg standards, Frogge believes, could make a big difference in cultivating a degree of transparency.

“I think we’ll have more information in general about these schools. I want a better understanding of their finances. I want to see to it that charters are not cherry-picking students. I just want make sure they are playing by the same rules as other schools.”

There were a number of key factors in Nashville – aside from its explosive charter school growth and board members’ mounting frustration at the lack of transparency- that made it particularly well-suited to introduce new accountability standards, says Leigh Dingerson, a consultant with the Annenberg Institute for School Reform and the author of the Standards report.

“Here you have an effective and engaged union, with strong relationships in the community, and good relationships on the Board of Education--including members who were ready to take action on issues of transparency and accountability in the charter sector,” Dingerson explains.

In the spring, MNEA mobilized its members, other educators, parents, and community members to raise awareness of the Annenberg Standards and then take action to urge the school board to adopt them.

MNEA cultivated strong relationships with community groups in Nashville, including Tennesseans Reclaiming Education Excellence (TREE) and Statewide Organizing for Community Empowerment (SOCM) who were also concerned about the lack of transparency in the charter sector. 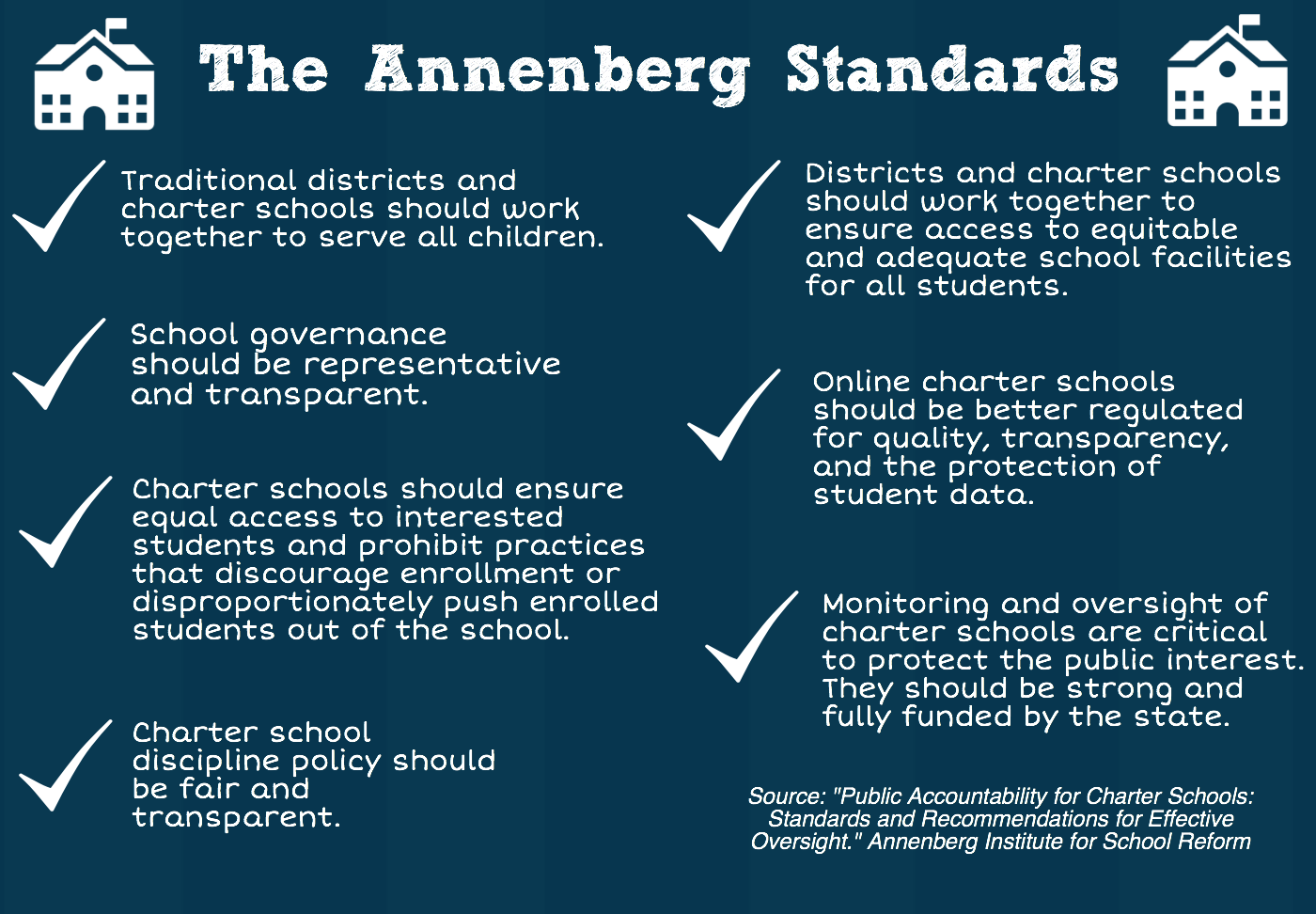 “The parent and community engagement component of our campaign was key to our success. We used an email campaign, newspaper op-eds, other media efforts, appearances during public participation at a Board meeting, and direct lobbying of school board members,” Huth says.

“Together with the school board members, they were able to turn to the Annenberg Standards as a way to take concrete action on shared concerns,” Dingerson explains.

The Nashville Board of Education has the authority to impose a set of standards on the charter schools that they green-light. But even in cities where the district is not the authorizer, Dingerson points out, it should still be possible for a local district – spurred on by mobilized and vocal educators - to send strong signals about transparency and accountability.

Furthermore, Dingerson explains, "any charter authorizers could be approached and asked to adopt the standards, and state legislatures have the power to adopt much stricter rules on public accountability as well. The standards were designed for implementation at multiple levels.”

In Nashville, public school advocates expect significant pushback and obstruction from charter operators and their allies in government, but are reassured that accountability and transparency are going mainstream.

“The conversation around the Annenberg standards was an eye-opener, a real educational experience for the entire community,” Pinkston says. “It was a difficult conversation, but it's been valuable in increasing awareness of the risks – and opportunities - associated with charter schools.”