A federal court has ordered Betsy DeVos to implement protections for students in online programs - the latest blow to her anti-public education agenda. 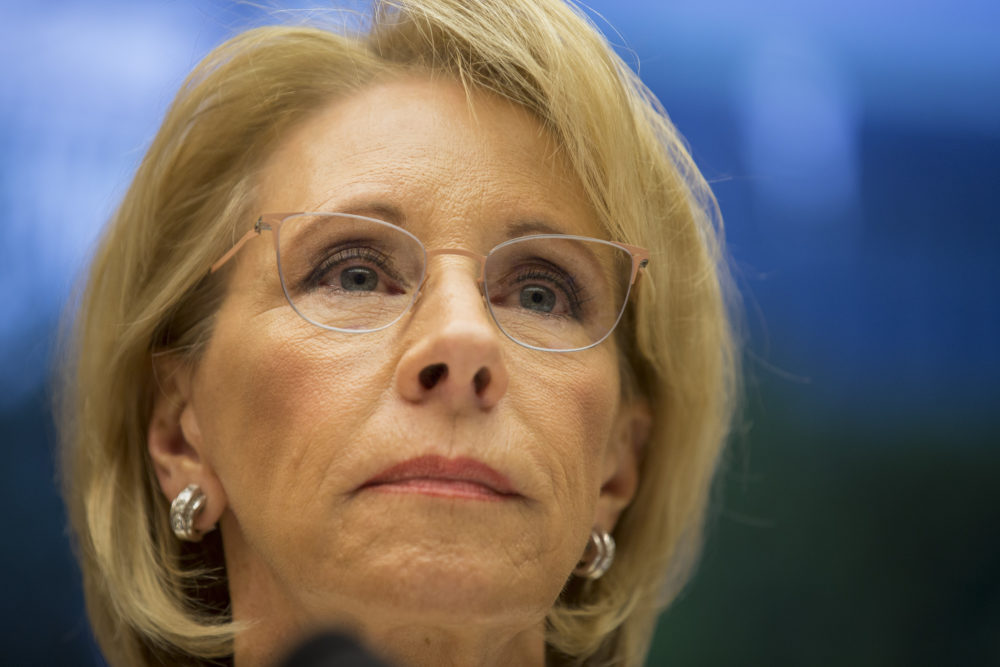 Thanks to the determination and legal acumen of the National Education Association and its allies, a federal court has ordered Secretary of Education Betsy DeVos to implement much-needed protections for U.S. students in online college programs.

“Time and again, Betsy DeVos and the Trump administration have inexplicably and brazenly set their sights on rolling back vital protections for students, and in this case, did so unlawfully,” said NEA President Lily Eskelsen García. “The federal court’s decision is a victory for students, transparency and common sense.”

The DeVos administration’s defeat in federal court—the latest in a string of judicial strikeouts—marks another blast by NEA and its partners to DeVos’ anti-public education, pro-deregulation agenda.

This particular defeat stems from a September lawsuit filed by three California educators with the support of NEA, the California Teachers Association (CTA), and the National Student Legal Defense Network (NSLDN). The plaintiffs pointed the judge to DeVos’ rollback of federal protections for online students, specifically the “state authorization rule” that require DOE to share information with students about online higher education programs, such as the programs’ accreditation status and whether they comply with state licensing requirements.

With enrollment in online higher education programs soaring—about one in six U.S. college students take all their classes online—it’s critical for these students to get good information about the value of these programs. They’re spending or borrowing tens of thousands of dollars, and investing years of their lives.

On the Side of Students

Instead of protecting students, the DeVos administration has attempted to protect institutions, especially for-profit ones. In testimony on Capitol Hill, when asked about the 100,000-plus complaints filed with the DOE by students who say they were defrauded by their for-profit colleges, DeVos has said “students should go into higher education with their eyes wide open.”

That answer isn’t good enough for NEA Aspiring Educator members like Stephanie Portilla. A mother of two, Portilla did her research before selecting the online-only Western Governors University (WGU). It currently fits her needs—and meets the teacher licensure requirements in California. But if WGU’s status changes, and 2017 audit by DOE raises that possibility, Portilla wants to know about it. DeVos’ rollback of the disclosure requirements would have left Portilla in the dark about the worth of her investment.

Time and again, Betsy DeVos and the Trump administration have inexplicably and brazenly set their sights on rolling back vital protections for students, and in this case, did so unlawfully.”  - NEA President Lily Eskelsen García.

That’s why she sued.

“The common-sense disclosures help prospective and enrolled students evaluate the legitimacy of online programs and the institution that offers them,” said CTA President Erin Heins. “Without them, students like Stephanie Portilla could end up saddled with debt and stuck with a worthless degree they can’t use.”

This isn’t the first time that DeVos and the Trump administration have been forced by federal judges to protect American college students. Last fall, a federal judge ruled that DeVos’ actions to delay “borrower defense to repayment”—an Obama-era regulation that provides student loan forgiveness to students whose for-profit colleges defrauded or misled them—were “unlawful,” “procedurally invalid,” and “arbitrary and capricious.”

In this situation, NEA had warned DOE that the borrower defense rules were necessary and good—not just for students, but also for American taxpayers who contribute millions of dollars to for-profit colleges through federal support for those institutions.

“To delay and revise simply prolongs the situation where students and taxpayers are at risk, and irresponsible institutions continue to collect government money without any reasonable accountability to provide educational benefits to their students,” wrote Donna Harris-Aikens, director of NEA’s Education Policy and Practice department.

In December, a court also forced DeVos to cancel $150 million in federal student loan debt held by 15,000 students whose for-profit colleges abruptly shut their doors. About half attended the for-profit Corinthian College, which closed in 2015, and NEA had urged DOE to do the right thing for these students. More recently, in March, a federal judge ruled DeVos illegally delayed for two years a rule that requires states to address racial bias in their special education programs.