We are in the midst of a “movement moment” Kim Anderson told the RA delegates, and we must continue to play an active role. 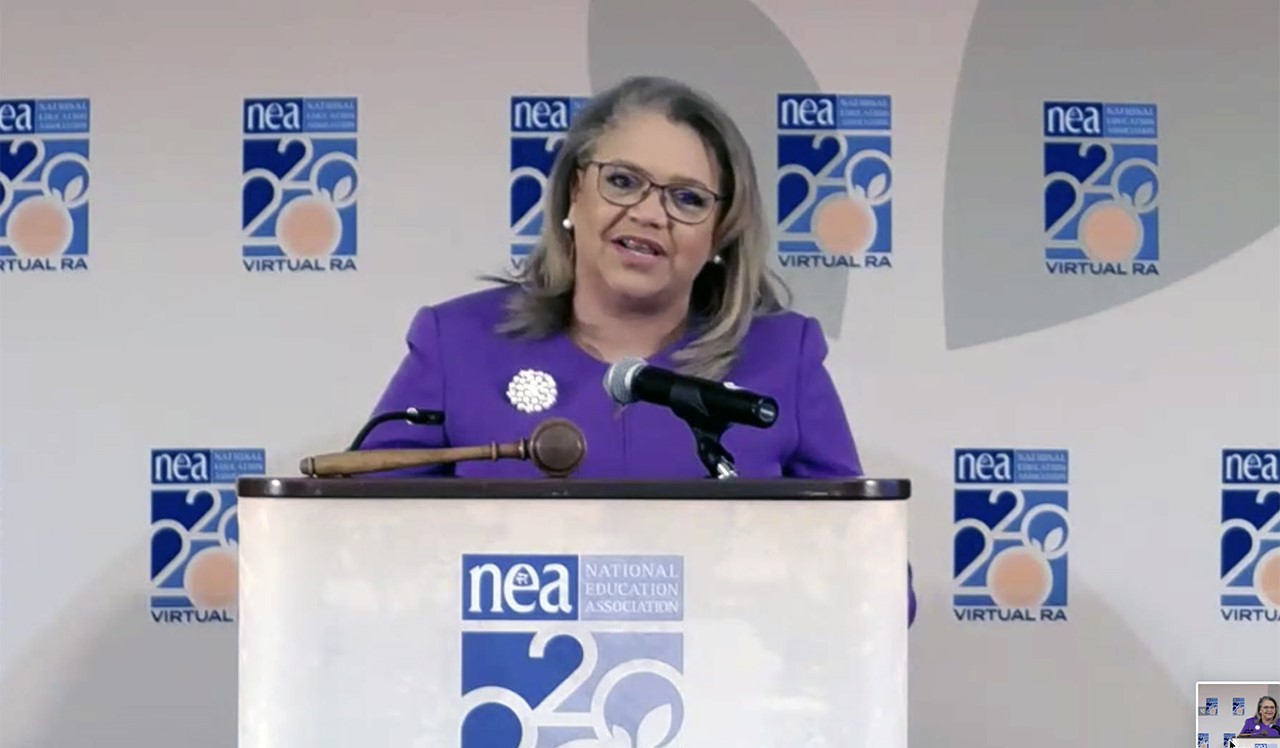 In her first address to RA delegates, NEA Executive Director Kim Anderson began with honesty and humanity, presenting a piece of herself to illustrate the profound impact educators can have on a life.

“I want to share with you today some things that are part of my lived experience….as one of your former students, as a parent with two children of my own, and as a person of color in America,” she said.

As a seventh grader at Thoreau Middle School in Vienna, Virginia, a suburb of Washington, D.C., she said her educators changed her life by seeing all of her, not just an awkward, brown-skinned daughter of a single mom who was talkative and disruptive in class. They didn’t send her to the principal’s office or refer her to special education.

“Instead, they figured out that I wasn’t bad; I was bored,” she said. “Mrs. Skjei asked me to help a few other students in my class learn new material. And my guidance counselor, Mrs. Elliott, asked me how many AP classes I wanted to take in high school and how many colleges I would apply to, not whether I was going, but how many applications I would fill out.”

Those educators changed the trajectory of her life by valuing her as whole person. Their belief in her, she said, awakened a belief in herself that allowed her to see her own potential.

“Now here’s the hard part,” she said. “Not all kids experience what I experienced in school. As human beings, we know that we all have implicit biases.  And those biases mean that some students’ stories are not fully seen or heard. My own daughters noticed that at a fairly early age in their own schools.”

“That’s why our work is so very important,” she continued. “The fight for social justice, advocacy, professional development, coalition-building—it all matters.”

My dream as a parent and as an American is that one day, we will wake up and be able to say that the first form of a just society that a child experiences is in her public school, and that her educators made it so.”

We are in the midst of a “movement moment” Anderson said, and we must continue to play an active role, ensuring that our #RedforEd movement stands in solidarity with all movements demanding racial, social, economic, and climate justice.

“This is the most intense multi-racial, multi-generational movement moment in this country since the 1960s,” she said. “And it will take this kind of socio-political movement power to disrupt systems in our country that aren’t working for the vast majority of Americans.”

We can make this dream a reality, Anderson assured delegates.

She pointed out the tremendous progress NEA members have made over the five years since the 2015 Representative Assembly unanimously passed New Business Item B, which called upon NEA members to dismantle institutional racism by identifying the pervasiveness of white supremacy culture and advancing racial justice in education.

“This isn’t for show. This is real, it’s urgent. And we’re on the right path,” she said.

NEA is examining its own trainings, programs, campaigns, even its own culture as the organization as a whole continues its own racial justice journey.

“My dream as a parent and as an American is that one day, we will wake up and be able to say that the first form of a just society that a child experiences is in her public school, and that her educators made it so,” she said. “Imagine that.”

Imagine the day, she asked delegates, when every student learns about Juneteenth and the Trail of Tears, Wong Kim Ark, Sylvia Mendez, and Stonewall, and that educators made it so—a culturally responsive and reflective curriculum that tells every student in America that they are seen and that they have agency.

Imagine the day, she asked, when a student no longer wonders why some schools have classes in robotics, artificial intelligence, and coding while others can barely find a Bunsen burner or connect to broadband.

Imagine when there is no school-to-prison pipeline because we, as a union, ensure that every member has the tools to challenge their own implicit biases.

“That’s why our Leaders for Just Schools effort is so important,” she said. “We are developing equity leaders as part of our union’s leadership roles.”

Imagine marching up to Capitol Hill, Anderson asked, and demanding an Equity and Excellence law that proclaims that the United States will ensure that every student in America truly has equal opportunity in public education.

“That we once and for all declare that access to a world-class, 21st century public education is a fundamental right. And that our education system prepares students not just for a job, but teaches them to pursue justice because it’s what they experienced in their public schools.”

Anderson said she can see that day on the horizon, but warned that getting there won’t be easy.

“Even if we as a union lead this country to truly tackle white supremacy culture and purge anti-Blackness from the American psyche, we will still be left with at least two structural obstacles to forming a more perfect union,” she said.

We Must Demand Basic Fairness

Along with racial and social justice, she said we must pursue economic and political justice. We need look no further than the struggles of our own members to see economic injustice.

“One of our members teaches full time in a public school,” Anderson told delegates. “She lists her condo on Airbnb, and when she has a tenant, she leaves her home and drives to her school parking lot and sleeps in her car.”

The fact that some of our education support professionals and other public service employees receive food stamps is an abomination, she said.

Now, more than ever, we must demand basic fairness, that corporations pay their share of federal income taxes, that when our country is reeling from a worldwide pandemic, our federal government will act and not fall into economic crisis with no measures to protect us from a deadly health crisis.

“NEA, we need to shout at the top of our lungs to the US Senate — to Sen. Mitch McConnell — stop standing in the way of saving lives, of saving family businesses,” she urged. “Stop punishing public workers because state and local revenues have dried up due to the complete and utter lack of a national response from the President and all who stand with him!”

She asked members to visit nea.org/covidaction to raise your voice about what students, educators, and communities need during this crisis, and then to visit strongpublicschools.org to make sure they are registered to vote.

“If we want a public education system that is worthy of our students, that is the engine of our economy, and the model of a just society, we have to raise our voices and we have to vote and we have to lead,” she said. “NEA, the time is now. Speak out. March. Vote. Run. For our students, for our members, for our communities, and our democracy!”