NEA: It is Time for Betsy DeVos to Resign

DeVos's recent disastrous public appearances only confirm how unfit she is to lead the U.S. Department of Education. 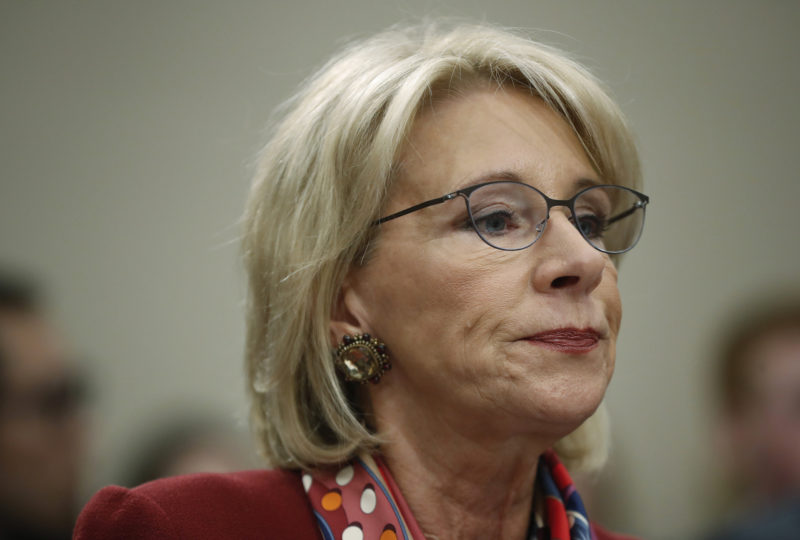 Until Betsy DeVos is no longer leading the U.S. Department of Education, there is never a bad day to ask her to resign. DeVos has proven time and again how unqualified she is to be Education Secretary, and her testimony before a House appropriations subcommittee on March 20 was no exception.

And who could forget her sit-down interview with Lesley Stahl of 60 minutes, where DeVos said, “I have not intentionally visited schools that are underperforming.”

This isn’t the first, second, or third time DeVos has disappointed.

In February, DeVos blocked educators, parents, and union leaders from delivering more than 80,000 report cards by locking the doors to the Department of Education. The report cards gave DeVos an “F” for her first year as secretary of education and confirmed what educators already knew: she’s unqualified.

“…[W]e asked the public and 80,000 people responded…[with] a very thoughtful critique of what they saw happening in their schools because of policies she’s supported,” said Lily Eskelsen García, an elementary school teacher from Utah and president of the National Education Association (NEA).

García shared one of these critiques: “Millie of Washington State [said], “I never failed a student during 20 years of teaching, but Secretary DeVos has failed the American people, teachers, [and] our students who are this country’s national treasure.’”

A Mission to Destroy Public Education

It’s been nearly 400 days since García sent a letter to head of the education department, asking for a response to four questions centered on equity, equal access, non-discrimination, and opportunity for all students.

At the time the letter was sent, García expressed how she was “struck by the lack of clear answers” DeVos gave the public during her Senate hearing in June, 2017. “There is no doubt where we stand on issues critical to supporting students and public education, but Americans have a right to know where she stands.”

America is still waiting for a response.

Every decision she has made since being confirmed is proof that she still does not have the best interest of students at heart—that she does not understand the mission and importance of public schools or the importance of students’ civil rights in schools and on campuses." - NEA President Lily Eskelsen García

García, along with thousands of educators nationwide, expressed serious opposition to DeVos’s nomination and confirmation. DeVos has no experience or degree in education, has never worked in a school, was never a teacher or an administrator, and neither she nor her children ever attended a public school. Her sole connection to public education is her decades-long mission to destroy it.

Educators, parents and allies sent more than 1 million letters via NEA’s activism site and made 80,000 phone calls in 4 weeks, urging senators to vote no.

“It’s hard to imagine a less qualified candidate for secretary of education than Betsy DeVos," said Cheryl Lake, a third-grade teacher from Michigan. "Her complete lack of public education experience alone is troubling, but worse yet is her decades of work to undermine public education through for-profit charter school and voucher schemes.”

It’s no secret that DeVos has long supported unaccountable, for-profit charter schools and vouchers, which drain public schools of critical resources and offer no choice for the most vulnerable students—those with special needs, those who don’t speak English, and those living in poverty. Her education track record in Michigan has proved that she’s no friend of public education.

More than a year into her role as education secretary, she continues to “undermine and obliterate the very system that opens its doors to all, not just a few, students,” penned García in an op-ed for the Atlantic Journal Constitution.

“Every decision she has made since being confirmed is proof that she still does not have the best interest of students at heart—that she does not understand the mission and importance of public schools or the importance of students’ civil rights in schools and on campuses. As the nation's top advocate for students, that is incredibly troubling.” 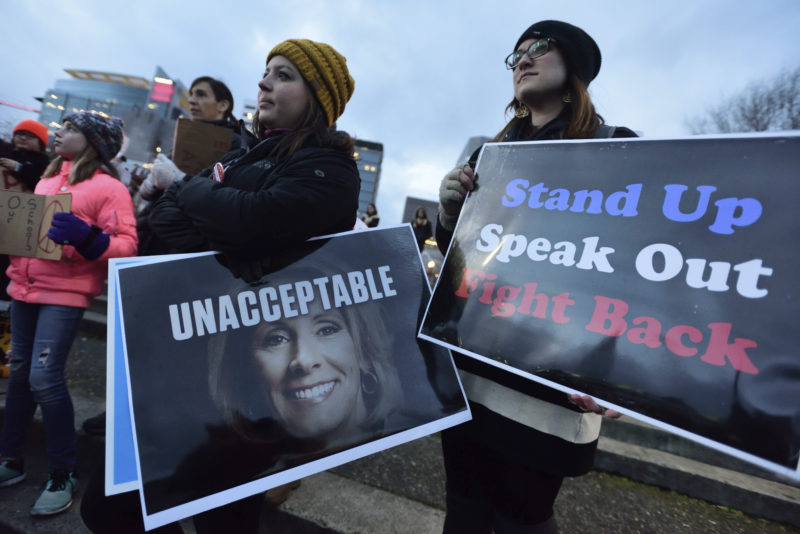 To start, below is a list of the top five DeVos stories compiled by NEA’s Education Votes. In descending order:

DeVos’s first visit to a school as education secretary was to a private voucher school in Florida. She and Trump ignored an inconvenient fact about the state’s voucher schools: Florida’s voucher program for special needs students, the McKay Scholarship, asks students with disabilities to waive their rights under the Individuals with Disabilities Education Act, IDEA. The same limitation holds true in many other voucher states. DeVos’s oversight — or slight — came as no surprise given her admitted lack of awareness of the federal special education law at her confirmation hearing. To be clear: Under IDEA, states are required to ensure that all students with disabilities receive a free and appropriate education in public schools and that parents are given a voice in their child’s education.

4. Refused to rule out federal funds for private schools that discriminate

At her confirmation hearing, DeVos refused to say whether she would deny federal funds to private schools that discriminate against students based on sexuality, race or special needs. In response to a question from Representative Katherine Clark whether an Indiana voucher school that denies access to students with LGBT parents would be disqualified from receiving education funds, DeVos answered, “For states who have programs that allow for parents to make choices, they set up the rules around that.” Pressed by Clark after DeVos’s non-answer, DeVos said, “The bottom line is that we believe that parents are the best equipped to make choices for their children’s school and education decisions.”

3. Described historically Black colleges and universities as ‘pioneers of choice’

DeVos praised Historically Black Colleges and Universities as “pioneers of school choice,” a remark that bears no relationship to the truth of their origins. For many generations, HBCUs were the only choice for African American students facing racism and educational segregation. DeVos’s gross inaccuracy prompted educators and students at Bethune-Cookman University to ask the college to withdraw its invitation to DeVos to serve as a commencement speaker. “The policies that DeVos pushes would have terrible consequences for future generations of Bethune-Cookman students — and for historically black colleges and universities themselves,” explained Fedrick Ingram, Florida Education Association vice president and a Bethune-Cookman alumnus. These policies included a proposed federal budget that cut millions of dollars for HBCUs and college access programs that help send low-income and first-generation students to HBCUs and other institutions, and $3.9 billion from Pell Grants, which a majority of HBCU students rely on to pay for tuition.

The Education Department’s plan to provide only partial loan forgiveness to some students defrauded by for-profit colleges could reduce overall payments by about 60 percent, according to an analysis by The Associated Press. DeVos approved a plan to discontinue fully wiping out the loans of students deceived by the now-defunct Corinthian Colleges. Student advocates say it’s wrong to hold students responsible for loans they took out to attend fraudulent for-profit colleges that inflated their job-placement rates and engaged in predatory recruitment and marketing tactics.

Eileen Connor, a litigator at Harvard University’s Project on Predatory Student Lending, which has represented hundreds of defrauded Corinthian students, criticized the policy. “I think that is terrible. It’s another example of the Department of Education picking the side of fraudulent schools and not doing right by those who have been hurt by them,” Connor told AP. Late last year, the state attorneys general of New York, Illinois and Massachusetts sued the Trump administration and DeVos for not granting loan relief to thousands of students defrauded by Corinthian and other for-profit schools that have closed. Their complaint alleges that DeVos’s Education Department unlawfully declared some of the student loans valid, leading to forced collections from students’ paychecks. California’s state attorney general filed a parallel complaint in the U.S. District of Northern California on behalf of 13,000 Corinthian students waiting for the federal government to forgive their loans.

1. DeVos spreads her influence — and money — in 2018 governor races

There will be 36 gubernatorial elections in 2018, and some candidates have received contributions from DeVos and her family, while others are unabashed supporters of her agenda to drain scarce funding from public schools to give to private and charter schools in the form of vouchers or education tax credits.