"We are called on to act. What will you do for your colleagues; your students; the families you love; the communities where you live?" 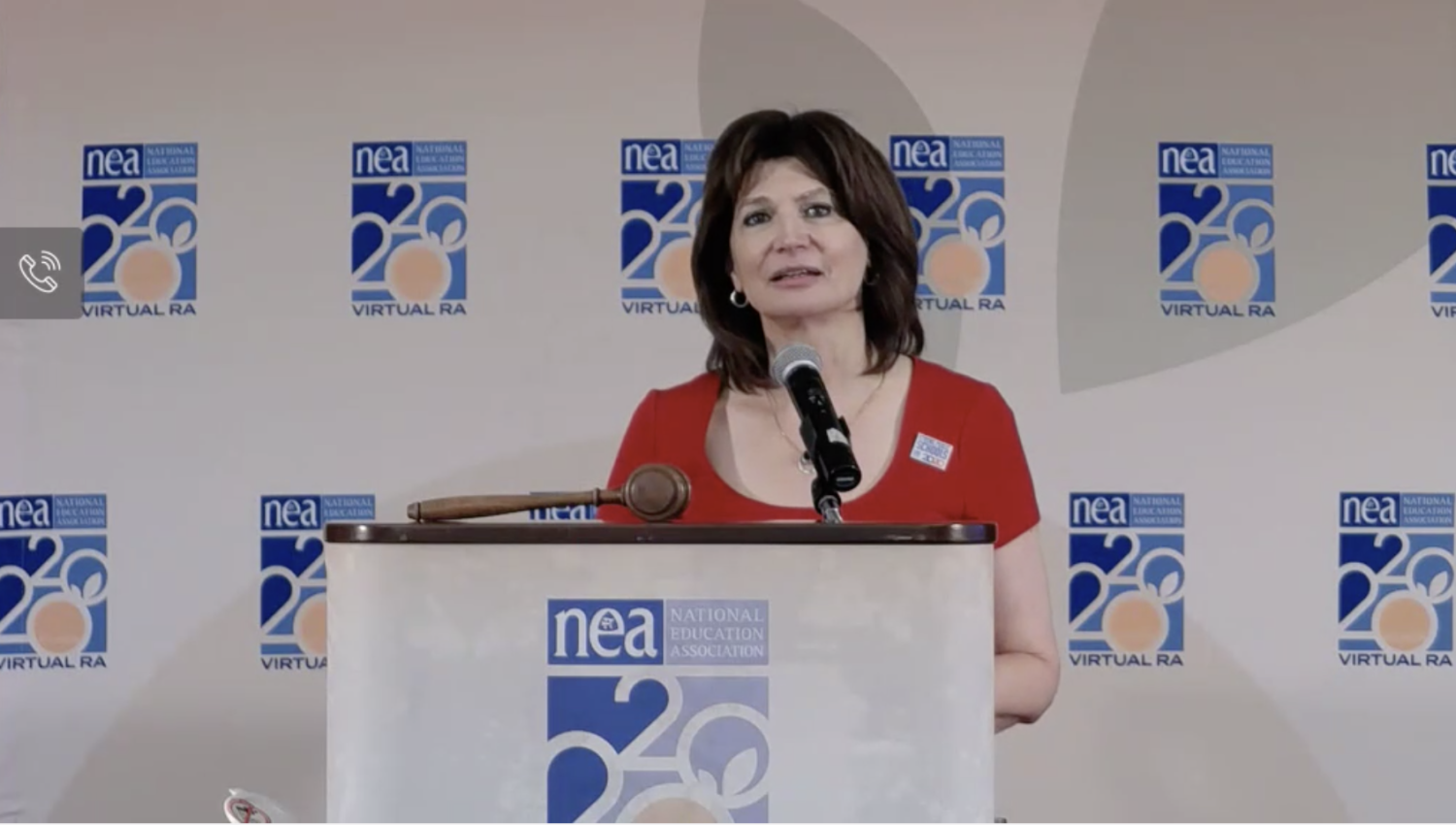 The nation stands at a crossroads, said NEA President Lily Eskelsen García in her final keynote address to the 2020 NEA Representative Assembly on Thursday, and it's up to educators everywhere to make sure it chooses the correct path.

Even though the 2020 RA is being conducted remotely during the continuing COVID-19 pandemic, nearly 8,000 educator delegates from every state have come together virtually over the next days.

"We are educators and public servants," Eskelsen García said today. "We are unionists. We are activists. We’re patriots....We are called on to act. So, what will you do? What will you do for your colleagues; your students; the families you love; the communities where you live? What will you do as we face the most dangerous threat to our democracy that we’ve ever faced?"

"Lily was relentless in beating the drum about the horrors and expense of the testing craze that had swept and hoodwinked this country," Pringle said.  "And people did listen, and they joined her crusade. ...She set out to lead this organization in taking on its own responsibility to do the work required to move this country toward the systemic, fair treatment of people of all races that ensures equitable opportunities and outcomes for everyone."

The theme of the 2020 RA is 'Our Democracy; Our Responsibility; Our Time.' It will take the collective power of NEA members and their allies to deliver a resounding victory for our students at the polls in November, Eskelsen García said in her speech today. But is also up to educators to leverage electoral success to bring about desperately needed change - namely uprooting the inequality that, to the detriment of millions of students, has become entrenched in every ZIP code across the nation.

Someday when you are asked what you did when democracy was in peril; when your country needed you – you will have a powerful answer: I was part of the collective voice and collective power that refused to be silent."

"America never was America for too many Americans," Eskelsen García said, quoting poet Langston Hughes. "But what some folks who know that, haven’t figured out that this wasn’t by accident. Exclusion was intentional....Inequality is by design."

Throughout U.S. history, people in power have worked the system to make sure their power stayed intact. Opportunity for others has always been deemed a threat to their bottom line. This destructive mindset, Eskelsen García told the delegates today, is personified today by the Koch family and other billionaires who have aggressively sought to exploit the working class, tilt tax codes to their favor, destroy the environment ... and support manifestly unfit individuals to higher political office.

"They have corrupted our cherished word: freedom. And they have chosen their champion: Donald Trump," said Eskelsen García, who mocked the Trump campaign's desperate and offensive attempt to recast their pre-COVID, pre-economic collapse re-election slogan, "Keep American Great" to "Make America Great ... Again." "A sick joke, an insult to reality," she said.

Eskelsen García reminded the delegates that educators have always made their mark on history. In recent years, their voices have been louder than ever, standing up for gender equality, LGBTQ rights, and the 800,000 DREAMERS who live, study, and work in the United States.

"In the darkest times of injustice in our country, there have been brave, ordinary people who will act. Who will literally stand together and say, “No. This isn’t right. And Yes, I’m ready to do something about it.

"You will be leaders in defining what democracy will look like in our country," Eskelsen García continued. "And someday when you are asked what you did when democracy was in peril; when your country needed you – you will have a powerful answer: I was part of the collective voice and collective power that refused to be silent."