NEA President: "Something Big Is About to Happen" 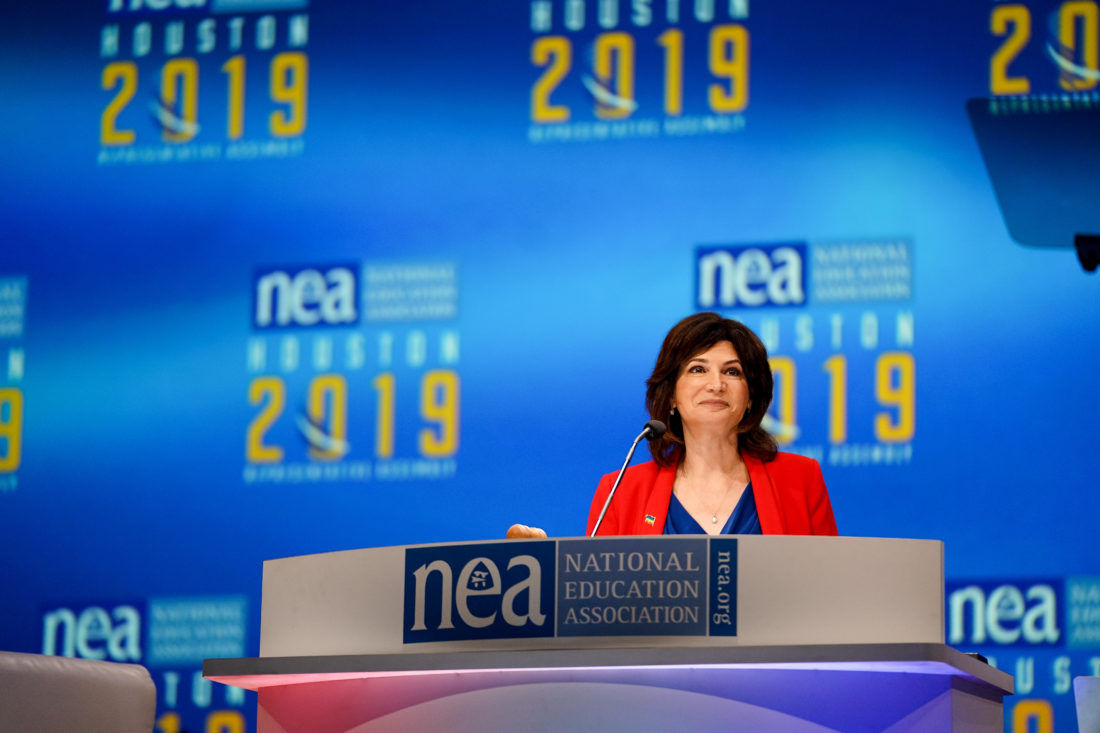 In her keynote address to the 2019 National Education Association Representative Assembly on Thursday, NEA President Lily Eskelsen García told the almost 7,000 delegates that the stakes in 2020 are too high for any educator to disengage from the political process.

Eskelsen García delivered her speech on July 4, usually a day to celebrate freedom and independence. Now, she said, everyone must stand up for something that is endangered.

"I’ve taken it for granted that in an open, democratic society, the moral arc of the universe would always bend towards justice," she said. "That our country would keep finding ways to be more inclusive of folks who had been excluded; that we’d be looking for ways to give opportunities to folks who had so little; that we’d see more ways to appreciate our diversity of cultures and languages and races and our LGBT communities."

Now more than ever, the nation needs its educators to take up the call. "The moral arc of the universe needs us now to put our backs into education justice," Eskelsen García told delegates.

It's already happening. In early 2018, West Virginia educators staged a historic walk-out sparking the national #RedforEd movement that quickly spread to states whose schools had buckled under a decade of extreme budget cuts.

"Even without a march, surprising doors were opened.  Politicians who usually said, 'Talk to the hand,' reached out to our leaders and said, 'Let’s talk. We would so rather you not go all West Virginia on us,” Eskelsen García said.

Momentum carried over into the fall with the midterm elections. Educators delivered in spectacular fashion, helping sweep pro-education candidates—many of them former or current educators—into office at every level of government. Jahana Hayes, the 2016 National Teacher of the Year, was elected to the U.S. House of Representatives.

Educators should never apologize, never shy away from being "political," Eskelsen García said.

"Political action isn’t subversive.  It’s the essence of democracy.  Showing up informed and engaged, prepared to make a difference is exactly what democracy looks like."

And NEA is prepared to be powerfully engaged in the 2020 election.

"I hope I’m not being too subtle.  I want to be clear," Eskelsen García said. "The United States of America must have a new president. ...Donald Trump is pushing our beautiful, imperfect nation towards authoritarianism and despotism. In the history of history, wherever authoritarian, anti-democratic despots took over, they had a common strategy. It’s about who you oppress, who you scapegoat, and the institutions you corrupt."

To elect a new president—one who respects our democratic institutions, who has an inclusive vision for the country and strongly supports public education—NEA members will need more information than ever before.

On Friday, July 5, Ekselsen García will host 10 presidential candidates at the first ever #StrongPublicSchools Presidential Forum. It promises to be an exciting opportunity for members to hear directly from the candidates about their thoughts on public education.

"So much depends on betting this right," Eskelsen García said, because so much is on the line. But all signs point to unprecedented mobilization by educators in the 2020 campaign.

Eskelsen Garcia recounted how, while attending a reception at Nancy Pelosi's offices prior to a State of the Union address, she was approached by Evelyn Fabito. Fabito, a teacher in Maryland, was working the event as a server, one of her three jobs.

"I do a lot of these kinds of events," Fabito told Eskelsen García. "But tonight, I see all these important people and I see you, the NEA president right here with them, and I just know, something big is going to happen.”

Those words stuck with Eskelesn García long after she departed the U.S. Capitol that night.

"Evelyn Fabito was the most important person I met that night," she recalled. "There is no freaking way I’m letting her down.  Something big is going to happen and she’s going to be part of it. ... We will use our collective power to listen and learn and teach and reach and engage and organize and convince.  And who better to do all that than those who teach our students their rights—but also their responsibilities in our democracy."