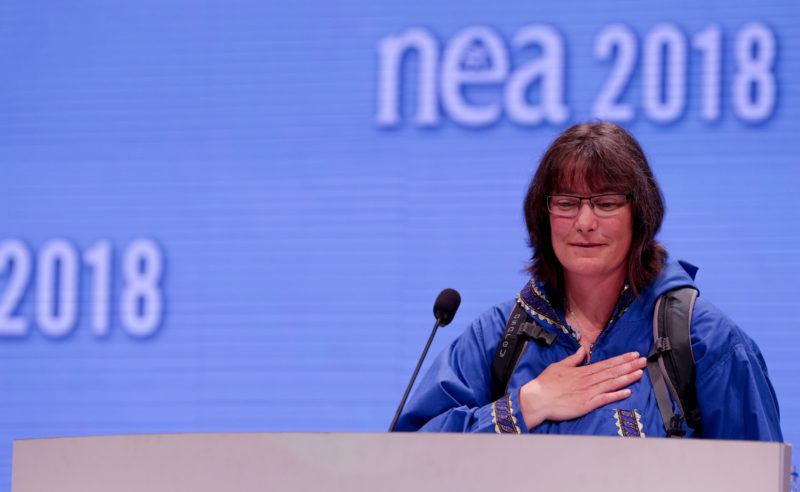 Following a video introduction by one of her students from Tanaina Elementary School in Wasilla, Alaska, Sherry Shaw confidently took the stage Monday at the NEA Representative Assembly. Not only did she hold a copy of the speech she would deliver as the 2018 NEA Education Support Professional (ESP) of the Year, but she was carrying a gray Osprey backpack.

With photographs of her students in the background, Shaw, a special education paraeducator and member of NEA-Alaska and the Matanuska-Susitna Classified Employees’ Association (MSCEA), said her students, “are the reason I do what I do.”

Shaw asked her fellow educators to imagine they were carrying a 100-pound backpack around all the time.

“That would be about the equivalent to the baggage some students are carrying around that we don’t see,” she said.

Students don’t leave the trauma of poverty and exposure to violence, insecurity, loss, hardship and neglect, instability in their homes and communities at home, she added.

“They show up in our classrooms, our hallways, on our busses, and in our cafeterias in all kinds of ways,” Shaw said. “Often, there is no room for learning. They are just trying to figure out how to survive the day.”

She acknowledged that she was once one of those students carrying a “heavy backpack.”

“School was tough, but you know what I had,” she said. “I had a teacher, an ESP, and a coach who helped me unload my backpack and refill it, with empathy, love, respect, grit, drive, and tools to be successful.”

In Wasilla, Shaw manages a program that provides food, clothing, and hygiene products to families affected by drug abuse, domestic violence, and homelessness. Many of those affected are students.

Cracking the Code
For 13 years, Shaw has worked closely with teachers to prepare classroom materials, modify curriculum, work one-on-one and in small groups with special education students, as well aid in the students’ socialization and behavior management.

“As educators, we’ve seen it all,” she said “Some students lash out. Some tune out. Some are preoccupied, impulsive, unable to concentrate, distrustful or nervous.”

Shaw told delegates they need to ask what is in students’ backpacks and then work to “crack the code” of students’ worlds.

Pointing to an image over her shoulder, Shaw spoke of one of her students with severe autism who she worked with when he was in fifth grade.

“There was one thing he loved and that was, Star Trek,” she said. “That’s all he cared about. That was his world.”

To connect with the student, Shaw began to study the interstellar adventures of Captain Kirk and his crew aboard the Starship USS Enterprise.

“I even wore the blue Star Trek uniform that Commander Spock wore,” she said, while a photo of her and six other educators in Star Trek attire was displayed.

After a few months, Shaw said her student started to separate the fiction of Star Trek from the real world and he began to read and communicate.

Amid applause from the audience, Shaw said her student finished eighth grade and is set to start at a career and technical high school in the fall.

“Now, his backpack is a little lighter because he is stronger,” she said.

Leadership and Professional Growth
As a local leader, Shaw has helped to promote ESP Appreciation Week in the Matanuska-Susitna Borough School District by raising funds for gift packages going to ESP. Within the 900-member MSCEA, Shaw is a building representative at Tanaina.

During her speech, Shaw celebrated the launch of a new initiative focused on identifying universal standards of professional practice by ESP that contribute directly to student-centered learning environments. It’s called the ESP Professional Growth Continuum.

“With the launch of the continuum and with the continued emphasis in leadership development, we have the opportunity to own our (ESP) professional learning journeys,” she added. “This is clearly an exciting and important time for ESP professionalization.”

Shaw then acknowledged the “pain and struggle” of working as an ESP.

“We get up every morning before the sun rises and do our jobs, and do them well,” she said. “We care for our kids. We nurture them. We love them. We educate them. We challenge and guide them.”

“No matter if we drive the bus, serve the food, clean the halls, or support our teachers, we cannot allow the winds of indifference to sway us away from our beliefs and values,” Shaw said. “We must continue to be united, engaged and involved at all levels of the Association.”