NEA to Supreme Court: Do the Right Thing for DACA Educators

In a brief filed today, the National Education Association urges the Court to protect the program that shields young people from deportation. 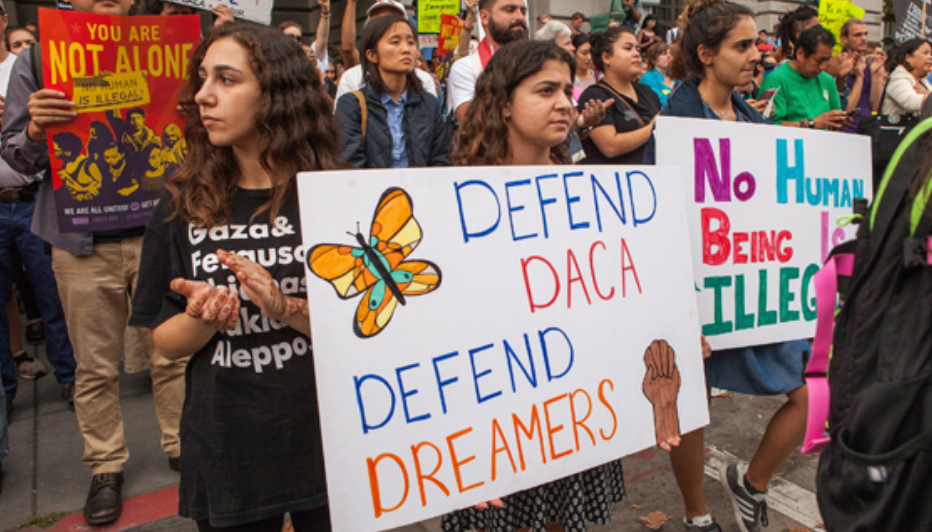 Today, in a legal brief filed with the U.S. Supreme Court, the National Education Association urged justices to protect the thousands of educators who rely on a federal immigration policy known as DACA to shield them from fear and deportation.

The Trump Administration’s inhumane termination of the Deferred Action for Childhood Arrivals (DACA) program in 2017 “not only broke the law but, more importantly, threatens to sweep away the dreams and aspirations of hundreds of thousands of our students, educators, and our neighbors,” says NEA President Lily Eskelsen García.

“The result will be disastrous for students and public education,” says Eskelsen García. “Young children will suffer the abrupt departure of trusted teachers to the measurable detriment of educational outcomes, teacher shortages will worsen as thousands of DACA educators lose their status, and immigrant students will lose a lifeline to education mentors. Rescinding DACA will deprive young people of the protection and certainty they deserve.”

Since 2012, when it was introduced, DACA has enabled about 660,000 young people, known as Dreamers, to be sheltered in two-year increments from deportation. These are people who were brought to the U.S. as children—37 percent before age 5—by their parents. With DACA’s protection, they have stepped out of the shadows, getting work permits and Social Security numbers, going to college and living their dreams.

They include Areli Morales, an aspiring teacher who remembers “[feeling] voiceless” in the years before DACA, and Anayeli Marcos, a University of Texas graduate student who plans to work as a counselor or social worker to under-served clients. “[DACA] affects every aspect of my being,” she says.

Justices will hear arguments in the case on November 12, and decide DACA’s fate sometime in 2020. Lower courts in California, New York, and Washington, D.C., already have ruled the Trump administration’s actions were based on faulty legal reasoning, forcing the administration to continue administering DACA renewals.

NEA’s brief joins others from all corners of the country, including one this week from Apple CEO Tim Cook, who argues that his 443 DACA employees bring “stories of adversity [and] achievement” to the massive technology company.

“DHS swept away DACA, together with its recipients’ dreams and their communities’ needs, in one curt memorandum that failed to provide a reasoned explanation for the agency’s drastic change of course,” writes NEA attorneys. “DACA educators, students, and administrators can—and do, here in this brief—attest to the serious reliance interests engendered by DACA, as well as the disastrous results that will ensue if the program is terminated.”

The Voices of DACA Recipients

In NEA’s brief, the stories of students and educators speak directly to justices. California world history teacher Angelica Reyes remembers dreaming of becoming an educator, accumulating more than 1,000 hours of community service as a student—but being blocked in her professional dream until DACA.

“It was heartbreaking that I couldn’t be part of the system I had tried to enrich,” she says.

Morales describes “wanting to be invisible” in her New York City public school classrooms. Today, she works as a substitute teacher, earning her teaching certification. If she can renew her DACA status, her future classroom will “foster acceptance, understanding, and empowerment to educate future generations of children, so they can strive to reach their greatest potential.”

Schools are full of teachers like Reyes and students like Morales. Ousting DACAmented teachers would lead to costly teacher turnover, which is proven to negatively impact student achievement and cost districts money, NEA points out.

From Oakland, California, high school teacher Kateri Simpson describes how DACA gave hope to her students. Without fear of deportation, they can envision working someday in U.S. hospitals or schools as nurses, teachers, and other professionals. They see a path through college. And, with work authorization papers, they can get jobs to pay for tuition. Students “all of a sudden… were able to work for themselves and that was such a powerful thing,” she says.

“The basic sense of human dignity to be able to work for what you want—I don’t think can be underestimated,” says Simpson.

With their attack on DACA, the Trump administration threatens the academic and economic wellbeing of countless students, families, and communities. Stress has an impact on academics and behaviors, points out Superintendent Matt Utterback, of the North Clackamas School District near Portland, Oregon. His students’ ability to concentrate, as well as “their ability to excel is being hampered because they are worried about their safety…and that of their family members.”

Other educators agree: “The constant uncertainty that our DACA students and our students [and] families without legal status face has caused fear, stress, anxiety, [and] hopelessness,” reports Maile Valu, a Washington State counselor. In Marshalltown, Iowa, this has led to a “lack of ability to focus, more frequent absenteeism, and lesser achievement with coursework and on test performance,” says Superintendent Theron Schutte.

In addition to its legal advocacy, NEA also supports legislative solutions to the immigration crisis, including passage of the DREAM Act, which would open a pathway to citizenship for some Dreamers. (Tell your Senators and Representatives to support the DREAM Act, too!)