As Need for Foreign Languages in School Grows, Access Continues to Shrink

Employers want workers who can speak another language, but lack of support at the K12 level has led to declining levels of proficiency among adults. 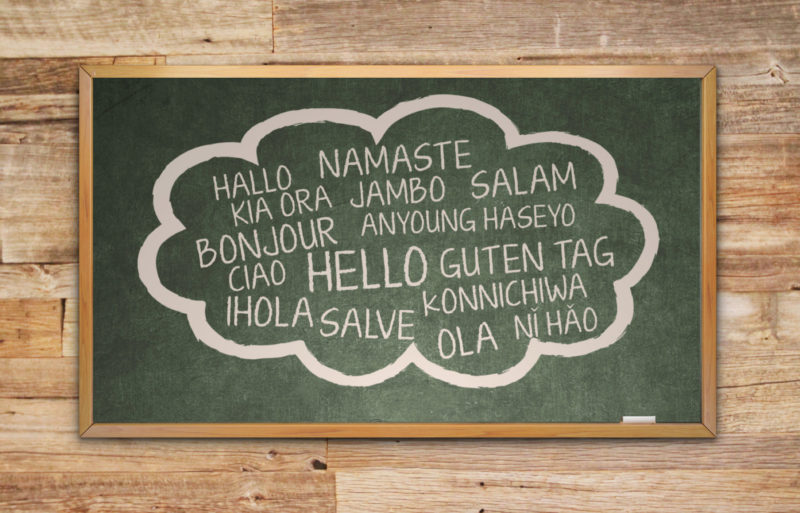 Recently, Katrina Griffin’s students took on a hot-button topic: Should parents control how much video games their children play? They debated the question at great length, making fierce, fact-based arguments, aimed at swaying their peers.

And they did it—in German.

Now, consider what Griffin heard in her own classroom: “A pretty heated debate! And it was in the target language,” she says.

Griffin and other educators are showing how to reverse the decline of U.S. language instruction. They are making language interesting and relevant to students, while also teaching them the critical 21st-century skills—collaboration, communication, presentation, and yes, proficiency in a second (or third) language—that will make them must-hire and give-them-a-raise employees someday.

The facts are these: Just 22 percent of elementary and secondary students in the U.S. take language classes or programs, according a new report from the American Academy of Arts and Sciences. According to “The State of Languages in the U.S.: A Statistical Portrait,” among elementary schools, the percentage teaching language fell from 31 percent in 1997 to 25 percent in 2008, despite evidence that an early start provides an edge in acquiring language proficiency. Among middle schools, the percentage dropped from 75 to 58 percent. 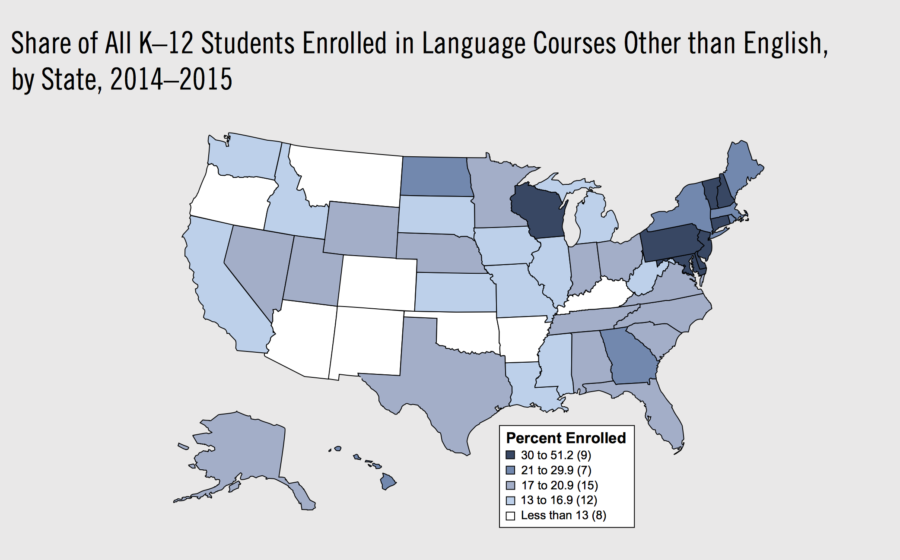 Source: The State of Languages in the U.S.: A Statistical Portrait

In Connecticut, New Jersey, Pennsylvania, Maryland, Vermont, New Hampshire and Wisconsin, more than 30 percent of K-12 students were enrolled in language. In Kentucky, Arkansas, Oklahoma, Arizona, Colorado, Montana, and Oregon, it was fewer than 13 percent.

This lack of support at the K12 level has led to declining enrollments in college, and declining levels of proficiency among American adults. And yet, the report also found that employers actually want workers who can speak another language.

“While English continues to be the lingua franca for world trade and diplomacy, there is an emerging consensus among leaders in business and politics, teachers, scientists, and community members that proficiency in English is not sufficient to meet the nation’s needs in a shrinking world,” the report’s authors write.

In Massachusetts a study found that online job ads seeking candidates who could speak a language other than English skyrocketed from 5,612 openings in 2010 to 14,561 in 2015. A similar study from New Jersey found that one in five job postings from some of the state’s largest employers—Bank of America, H&R Block, etc.—sought bilingual employees.

Bucking the national trends, at Griffin’s school, North County High School in Anne Arundel County., Md., a diverse campus where about 42 percent of students are living below the federal poverty line and 43 percent are non-White, student enrollment in world languages continues to grow. Recently, additional teaching positions in the languages department have had to be added.

While English continues to be the lingua franca for world trade and diplomacy, there is an emerging consensus among leaders in business and politics, teachers, scientists, and community members that proficiency in English is not sufficient to meet the nation’s needs in a shrinking world”

Students want to take these classes, and it’s no mystery why. Griffin, chair of the language department and the American Council on the Teaching of Foreign Language’s 2017 National Language Teacher of the Year, has tossed aside vocabulary memorization worksheets and verb-conjugation quizzes. Instead, with her leadership, language instruction has focused on actually using the language and practicing workplace skills.

Students read, write, and send emails in French, German, and Spanish. They also debate issues, like appropriate video game usage, write persuasive essays, work together on the Internet to research and write school-supply budgets and shopping lists, and discuss in groups meaningful, current questions like: Should new immigrants take on the culture of their new countries, or adhere to their cultural heritages? Their teachers don’t have the answers—their students do.

“What’s unique to our classroom is that it’s the only place where students are taught to communicate. In other classes, students may learn a lot of content, but they may not be learning to look people in the eye, to effectively communicate in spoken and written language,” says Griffin.

Her students rely on “authentic sources,” not textbooks, but the kinds of things their peers might pick up in Austria or Germany. During assessments, they might have to have a real conversation that interprets and incorporates those sources. It’s not like when Griffin started teaching, pre-home Internet, 16 years ago, and she was packing her vacation suitcases full of German magazines.

The students also are staying with languages longer, instead of the typical two to three years. Even though many of North County’s students don’t go to four-year colleges—many do go to two-year colleges, which don’t require language study for admission—they like what they’re learning. She and her colleagues teach every student “like they’re going to be proficient someday, and we tell them, ‘you just don’t know how useful this may be to you.’”