No Food, Paper, or Pencils Left Behind

Seeing an abundance of food and supplies in one corner of their lives and a severe need for these necessities in another, two educators jumped into action.

A shocking amount of food meandered from lunch line, to tray, to trash. It was nearly enough to fill several 50-gallon cans, the educator says. In a county struggling with food insecurity, Von Ness refused to stand idly by. She began to investigate ways to fix a system that she says was clearly broken.

“I was appalled by the food waste at school,” Von Hess says. “We have two food pantries in our town overwhelmed with people in need.”

Seeing an abundance of food in one corner of her life and a severe need for food in another, Von Hess knew what to do.

First, she contacted the cafeteria food services manager who informed her that all food was funded by a state grant which required by law that students receive an item from each food group. Once food hit the tray, it could not return to the kitchen. The obvious destination for unwanted food? The cafeteria’s large gray trash cans.

Von Hess continued to search for information. She found no rule that said the unconsumed food couldn’t be earmarked for a destination beyond the cafeteria.

Pointing to the closure of nearby Atlantic City casinos between 2014 and 2016, Von Hess recalls how the closures rippled into households.

"They’re struggling to keep their homes and feed their families,” Von Hess points out.

Many of the area’s families depend on food pantries to survive. And donations help to fuel the survival of the food pantries. Von Hess, a member of the Hamilton Township Education Association, explained the donation idea to the food centers in her area. They loved it!

Next, she created a detailed proposal, and headed to a meeting of the district school administration bearing a detailed plan with a name created by her son: “No Food Left Behind."

“Administrators were excited by the idea,” Von Hess says.

The program began at Davies in March 2015 and exceeded expectations. According to Von Hess, students were eager to donate unwanted food items.

Here’s how it works: Students drop unwanted food in boxes. After lunch, paraprofessionals sort the items into categories for delivery to food pantries the same day.

Over the summer of 2015, Von Hess collaborated with principals and paraprofessionals from neighboring schools to help them start their own programs. By that September, several schools were collecting food too.

“The food that we take to the pantries helps a lot,” says Von Hess. Collectively, the schools donate about 40 reusable grocery totes of food to area pantries per week. Von Hess says schools contact her often seeking advice about pioneering their own programs.

“My role as a paraprofessional has helped me to see community problems,” says Von Hess who is proud that her school got the ball rolling with “people who did not hesitate to jump in to help.” 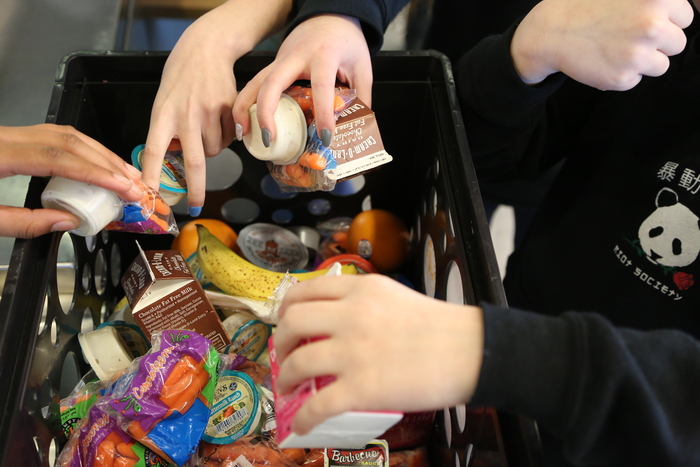 Responding to Tragedy Across Borders

In La Grange, Ill., Mary Ann Rivera, a special education paraeducator, was overcome with grief in 2017 as she watched television coverage of Hurricane Maria destroy her childhood neighborhood in Puerto Rico. She was compelled to act.

Rivera works at Lyons Township High School. At the end of last school year, she noticed students and teachers carrying loads of unused school supplies from their classrooms and thought they might want to donate supplies to students in Puerto Rico.

“Being an educator, I knew that I wanted to help the schools,” says Rivera. “I knew they would too.”

Like Von Hess, rather than wait for a solution to providing school supplies or food to those in need, Rivera took the bold step to bring educators and community members together for the common good.

”I was so happy, but I reminded him that we would have to help students in some way once we were there,” says Rivera, a member of the Lyons Township Paraeducators Association.

At first, Rivera collected supplies by word of mouth at her school. She also posted an announcement on social media and handed out flyers for distribution in her area.

In the end, Rivera collected 84 boxes of school supplies and $6,700—a feat she “never imagined,” she says. Rivera, now wants to connect educators in Puerto Rico with NEA members across the country to establish an “adopt-a- classroom” program.

“It’s important to get involved in helping others,” Rivera says. “By doing so, others will jump in.”