Teaching is one of the most sleep-deprived occupations. Here are some facts about sleep you should know as you plan your day.

Sleep is extremely important to the well-being of teenagers – but they’re not getting enough. According to a 2016 study published by the Centers for Disease Control and Prevention, 69 percent of high school students are getting less than eight hours of sleep on an average school night. Sub-optimal sleep for teenagers has been linked to academic inhibitors (e.g., attention and retention issues), mental health problems (e.g., increased risk of depression), and physical challenges (e.g., teens with less sleep are more likely to be overweight.)

Unfortunately, individual educators can't do much to make sure their students sleep enough at night, although districts across the country have been devising new policies – including later start times, even nap clubs – to bring schools more in sync with teen sleep patterns.

What we can do is pay attention to our own sleep lives. This, it turns out, is something teachers tend to be bad at  - especially early career educators. Too often, in an effort to "get it all done," teachers stay up late and wake up early, operating on increasingly worsening sleep deficits and calling it a strong work ethic.

I was in this camp myself, until recently when I began doing a bit of research into the importance of sleep to a long, successful, and fulfilling teaching career.

Here are a few important things I discovered about sleep - and a couple of suggestions on getting more of it.

The key to higher-quality, REM-filled sleep is a consistent schedule. Regular exercise helps us sleep better, as does a regular meal time and a regular bed time. In fact, one study suggests that sleep variability (i.e., going to bed at inconsistent times) is one of the most important factors in how well people sleep. It's better then to go to bed at the same time each night rather than going to bed early tonight to "catch up" from a last night's paper-grading marathon. Regular sleep schedules even predict better moods.

To improve at this, we can look at what time we would have to go to bed if we were going to aim at getting seven hours of sleep per night. This becomes our hard and fast bedtime, and paper-grading (which is best done in sprints versus marathons) gets scheduled either before that time or seven hours after it. 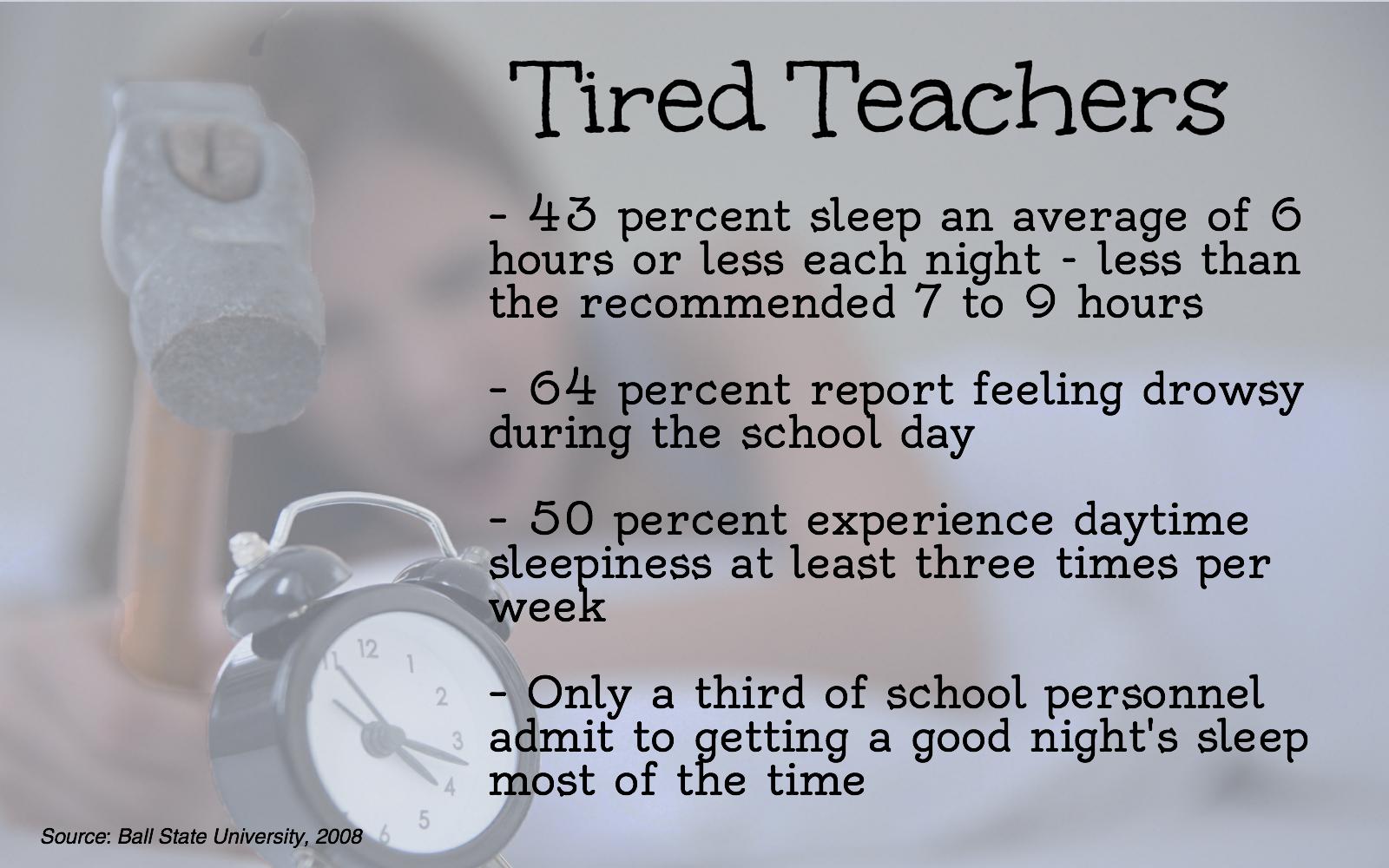 Good Sleep is a Fragile Creature

Sleep can be thrown off by all kinds of close-to-bedtime substance consumption, including some you might expect - like caffeine and nicotine -  and some that may surprise you, like alcohol. I used to think a glass of wine right before bed wasn't a bad idea but, as it turns out, it is. Apparently you fall asleep quicker with alcohol, but your sleep isn't as deep as it could be otherwise.  According to Shawn Stevenson's Sleep Smarter, deeper levels of sleep are "significantly disrupted" by alcohol being in your system," and this makes it so that your body can't "fully rejuvenate."

If you're like I was for the first five years of my career, you might be reading this and thinking something like, "Well, I don't get enough sleep, and I'm still performing well." Consider this: According to a physician study cited in Stevenson's book, sleep-deprived individuals took 14 percent longer to complete an assigned task. They also committed 20 percent more errors than their well-rested counterparts.

So here's a question: Even if you think you're doing ok even on inadequate amounts of sleep, does that mean you couldn't be performing with greater speed and accuracy if you were sleeping enough?

You Actually Figure Stuff Out While You Sleep

A 2015 New Yorker article, Maria Konnikova's "The Work We Do While We Sleep" , cited a bizarre study that found that our brains “think” when we sleep. Researchers assigned a complex math task to a small group of people. Konnikova describes what happened next:

Though the subjects didn’t know it, there was a simpler way of solving the problem—an abstract rule that would enable a quick solution. Few of the subjects spontaneously figured out the solution the first time. Each participant was retested on the task eight hours later; some were allowed to sleep and others had to remain awake. Just under a quarter of the group that took a sleepless break came up with the faster solution. But the insight rate more than doubled among the subjects who had spent the eight hours sleeping: sixty per cent of them could now see the shortcut.

In other words, our brains are actually working while we sleep. So maybe that solution to the classroom management conundrum you've been wrestling with or the curriculum knot you've been trying to untie is waiting for you in your sleep.

You Can't Handle the Light

Melatonin - the substance our body releases when our circadian rhythms say that it's time for bed - make us feel sleepy, but it also does things like normalize our blood pressure, improving our immune systems functions, and improving insulin sensitivity and weight reduction.

Here's the thing, though: exposure to light - especially the blue kind emitted during the daytime and from every electronics screen in the universe - interrupts the body's release of melatonin. Your eyeballs have certain photoreceptors that detect changes in light (these receptors even work in blind people); even our skin has light-sensing abilities.

So, chill on the screens.  According to research, screen time needs to end at least an hour before bed.

A Saner Work Schedule: Not All Tasks Are Created Equal

While these were some specific insight I gained about sleep, the reason I began trying to change my sleeping habits was because of the overarching story in all of these facts: sleep makes us more likely to succeed at teaching and more likely to enjoy each day. When something does both of those things - improves our outcomes in the future and our quality of life today ---we're foolish to ignore it.

So, if you're an educator who neglects sleep, try out a self-experiment for a few weeks to see how you might be more successful with consistent sleep.

For example, start thinking about a schedule you can use to force you into greater efficiency, effectiveness, and sanity as a teacher. Lay out a teacher work schedule – an actual plan of what specific time slots in a week you’ll budget for teaching-related work.

It’s helpful to get this all on paper, determining first what hours of the day you’ll sleep, and then what hours you’ll give to non-teaching priorities (e.g., family, exercise, doing the laundry, mental sanity time), and then the hours you have left and divvying up your work-related responsibilities within them. By the end of this process, you’ll have built a schedule that prioritizes sleep and forces teaching work to fit into the finite time slots you actually have (versus those that you wish you had) - and help make you a better teacher (and your students better students) in the long run. (You can read more about setting a better work schedule on my blog.)