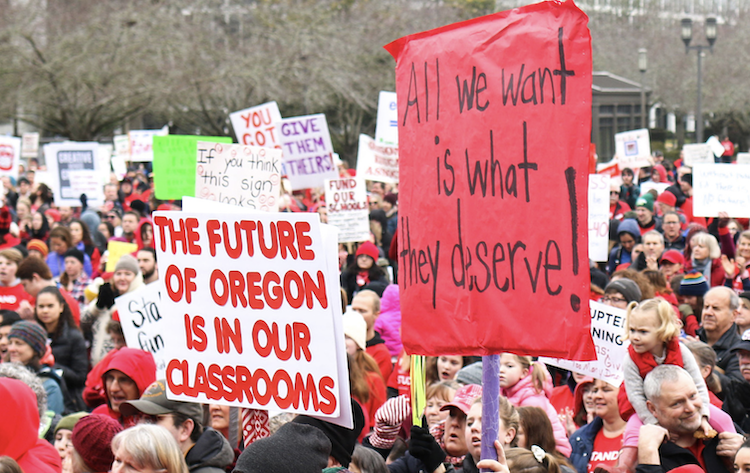 Educators built on the momentum of the #RedForEd movement by working hard in their state legislatures in 2019. In Kentucky, the Kentucky Education Association successfully mobilized educators to advocate for more public school funding. In New Mexico, where public school advocates helped elect pro-public education lawmakers, the legislature increased education funding by 16 percent and raised the minimum teacher salary to $41,000. In Virginia, the Fund Our Future rally helped secure educator salary increases.

The state that saw the most drastic funding turnaround, however, is Oregon.

Every day during the five-week 2018 legislative session, lawmakers heard from OEA members. Teachers, instructional assistants, counselors, and other staff recounted heartfelt stories that showed how their students’ learning was disrupted by the school funding crisis. The pain felt by students in overcrowded classrooms whose mental health needs were going unmet, and whose services and electives had been penciled out due to underfunding—all of it was brought into sharp focus and laid at the feet of Oregon’s 79th Legislative Assembly.

“Tens of thousands of educators, students, parents, and supporters gathered in one voice in nearly 100 communities across the state to call on lawmakers to prioritize Oregon students,” says John Larson, a high school English teacher and president of the Oregon Education Association. With this new law, Larson says, “educators and public school families can start to breathe a sigh of relief, knowing that instead of worrying about budget cuts, we can instead focus on the educational needs of our students and our future.”

The revenue from the corporate tax program will start to fill the resource gap created over decades of disinvestment. The Student Success Act will fund three main areas. One is early learning, which includes early childhood special education and relief nurseries. Some money will go to statewide initiatives, such as greater access to school meals and statewide equity plans. Finally, significant funding will go to resources that help meet students’ mental or behavioral health needs, with the goal of increasing academic achievement and reducing disparities among demographic groups.

HOW DID WE GET TO YES? BY ORGANIZING

Shouldering most of the load for schools was Oregon’s personal income tax, paid by individuals and small businesses. But when the economy falters, revenues from personal income tax vacillate, making school funding not only insufficient, but unstable. Over the years, OEA has worked to establish reserve accounts to hedge against that instability, as well as to bolster overall General Fund resources by recommending cuts to preferential tax breaks and by sponsoring tax transparency and rate increase initiatives.

In 2010, OEA helped to sustain two small tax increases. Two years later, the association fought successfully for the redirection of the corporate kicker to K-12 education. These incremental gains, however, were not enough. In 2016, OEA and its allies pursued a gross-receipts tax that would have raised $6 billion for schools and other vital state services. As with the Student Success Act, education’s share of the revenue would have been $2 billion per two-year budget period. But corporations fought back, deploying more than $20 million to defeat the school funding effort.

Undaunted and inspired by the growing national Red for Ed movement, OEA members pressed on to organize around the Student Success Act. In February 2019, 5,000 educators and parents, clad in red t-shirts, descended upon the state capitol in Salem to demand adequate school funding—once and for all. The historic show of support was followed by a lobby day, a statewide day of action, walk outs, school closures across the state, and teach-ins, all of which drew national attention.

On May 13, 2019, after Republicans walked out for five days in opposition, the Student Success Act was passed by the Oregon Senate, having passed the House on a 35-25 vote a week before.