Growing up in poverty, Marcell Branch turned to life as a gangbanger. Today, he's a paraeducator who works every day to keep his students on a better path. 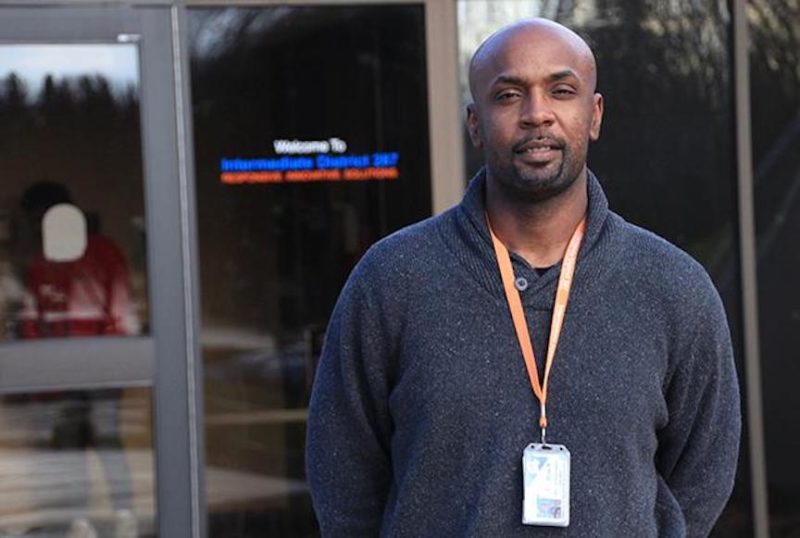 Paraeducator Marcell Branch is frank about the tribulations of his past. Working with students who have emotional behavioral disorders (EBD), who are at risk of dropping out of school, or otherwise have a chip on their shoulder, Branch often draws on his own history of unsavory experiences to connect with them.

“I hold them accountable when I need to but also take the time to celebrate their accomplishments,” says Branch, a behavior specialist who has spent 14 years working with at-risk youth, the last five at West Education Center in Minnetonka, Minn., an alternative school for ninth through twelfth graders who focus on vocational as well as academic studies. Most of West Ed’s 200 students are categorized by the state as having EBD.

“There is nothing more rewarding than seeing these kids succeed,” he says.

Walkie-talkie in hand at all times, Branch visits classrooms, monitors the cafeteria during lunchtime, and roams the hallways from daybreak to well past last bell. Usually, he engages students on a friendly basis. However, when a fight breaks out, a student loses their temper and starts throwing things, or begins cursing at a teacher, Branch is summoned.

“I break up fights then try to talk with the students to get to the root of what’s bothering them,” he says. “Violent or unruly behavior is a sign of a deeper conflict.”

Branch points out that students may be lashing out as the result of everything ranging from trying to cope with a learning disability and failing a class to experiencing family issues at home, being cut from the football team, or being cyberbullied.

“To be effective with this particular group of students, adults you need to listen and ask a lot of questions,” says Branch, Education Minnesota’s 2016 Education Support Professional (ESP) of the Year. “They have to know that when they walk into your office, you will respect them.”

The goal, says Branch, “is to give them a strategy and the confidence to cope with their anger … to keep their rage under control.”

Watching a young man get killed. That was my turning point to leave the gang life. I now work every day to not let anything like that happen to any of my students or children.”

Branch has been a case manager for homeless youth, program manager promoting life skills, and employment counselor at various youth-based organizations. He is a certified gang specialist known throughout the community for his candid speeches and training sessions on gang prevention.

In these presentations, he is brutally honest with audiences about keeping his own demons at bay while coping with a dark past: growing up poor in public housing, being homeless, the arrests, the hard drinking and daily drug use, and even the night in 1992 when he held a 9mm handgun to a seven-year-old’s head in order to get the child’s father to sit down and shut up so Branch and his crew could rob their house. He was 19. Fortunately, the father backed off.

“People always ask me if I would have shot that child,” says Branch, who has four children of his own ranging in age from 5 to 25. “My response is, ‘I have no idea.’”

As dysfunctional as some of his experiences were in his youth and early adult years, the 45-year-old Branch says they laid a unique foundation for his hard-earned counseling and peacemaking skills.

“I am no one to sit back and judge these kids,” he says. “I know the gang life from the inside and that helps me connect with students who are gang members or wannabe gangbangers.”

Branch was born in Memphis, Tenn., but lived in almost 30 different states before age 17.

“My mother liked to move a lot,” he says, which meant hitting the road about twice a year. “I don’t have any childhood friends, favorite teachers, counselors or anybody I can remember because I didn’t want to get close to anyone. I never knew when we were going to move again.”

This lack of stability was compounded by his stepfather’s physical abuse. Branch recalls one particular beating with a belt when he was in fifth grade that started after dinner and went long into the night.

“It was a 12-hour beating that put me in the hospital,” he says. “He told me if I told anyone what he did that he would do it again.”

That morning, Branch collapsed in his bus seat on the way to school. The bus driver carried him to the nurse’s office. She noticed lacerations on his face and drove him to the hospital for an examination. Eventually, he returned home.

“A lot of my anger … being homeless, joining a gang, drinking and using drugs … stems from that incident,” he says. “But the up side is that my own experiences with this type of behavior has helped me not only to understand but also sympathize with these kids. In my own way, I am one of them.”

Looking ahead, Branch is trying to complete the final credit hours he needs to earn a bachelor’s degree in psychology from Kaplan University. A building representative and member of Education Minnesota Local 2209, he is considering running for a seat on the executive council.

“We have 800 members but only 200 seem to turn out to vote on issues,” he says. “Only a small percentage of active members are people of color. I want to change this.”

Branch says that much of his life has been about transition, progress, and reinvention. As in 2000, when he witnessed a fellow gang member get shot twice in the chest and once in head for betraying a gang leader.

“Watching a young man get killed,” he says. “That was my turning point to leave the gang life. I now work every day to not let anything like that happen to any of my students or children.”