With grad assistants earning less then $18K a year, and working twice as many hours as promised, they need a voice in their working conditions. 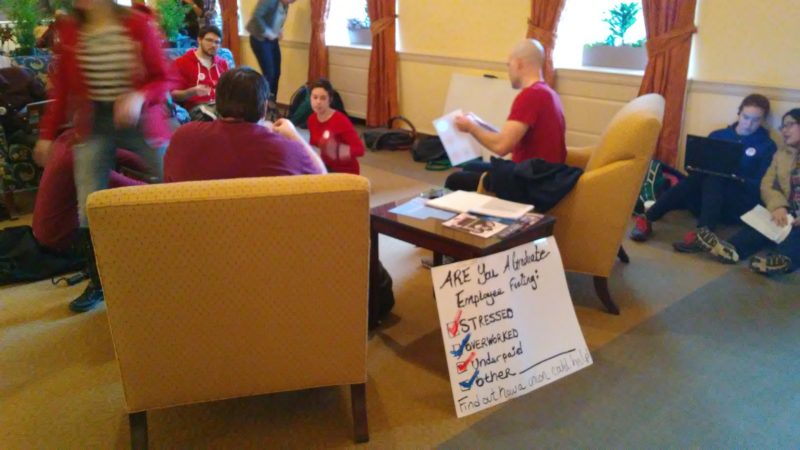 With affordable health care, fair pay, and reasonable working and learning conditions hanging in the balance, more than 3,700 graduate employees of Penn State University (PSU) moved closer to forming a new union, when the PSU Coalition of Graduate Employees (CGE) filed an election petition with the state Labor Relations Board.

At the same time, PSU CGE leaders asked Penn State’s administration not to interfere in the election.

PSU CGE began working last year toward affiliation with the Pennsylvania State Education Association with a focus on many issues, including very low stipends that force some graduate employees to live in poverty. A 2016 survey of PSU grad employees, commissioned by CGE, found that 63 percent of respondents received stipends less than $18,000 per academic year.

In February, members of the Penn State Coalition of Graduate Employees, organized a four-hour “work-in” outside the office of PSU President Eric Barron, illustrating the work that graduate employees do.

More than 60 crowded into the lobby of PSU’s Old Main building, and worked quietly on grading papers, analyzing data, and answering questions from students in their classes. One graduate employee even filmed a lecture for the class he was teaching.

“Penn State works, because we work. That’s the message we want university officials to recognize. Graduate employees are integral to the success of the university,” said Brianne Pragg, CGE chief organizer.  “We want to highlight that graduate students are workers and employees and that oftentimes our contribution is devalued.”

“It’s hard to get an undergraduate degree at Penn State without having a class taught by graduate instructors,” CGE record keeper Kevin Reuning said. “Graduate workers are involved in grants that bring in millions of dollars. But, it’s easy to forget about that.”

PSU’s grad employees aren’t the only ones who have realized that a union is the answer to the questions around pay, respect, health care, and more. Last year, the National Labor Relations Board ruled 3 to 1 that graduate students working as teaching or research assistants are, in fact, employees with the right to collectively bargain.

At PSU, another CGE priority is the is the overwhelming workloads that many graduate employees struggle to balance, which includes coursework and teaching undergraduate courses.

A contract that protects and enables positive working conditions will also improve the learning experience of undergraduates, union organizers said.

“When your teaching assistant has 100 students in one semester, how can you give them the time?” Pragg said. “Controls on the number of students or hours [worked] would allow graduate employees to devote more individual time to their students.”