PISA 2018: Slight U.S. Progress, But What Do The Results Really Tell Us?

It's no secret, says NEA President. Top-performing countries invest heavily in their students, educators, and schools regardless of socio-economic standing.

On December 3, the Organisation for Economic Co-operation and Development (OECD) released the results for the 2018 Programme for International Student Assessment, better known as PISA.

A test of reading, mathematics and science, PISA is administered every three years to fifteen-year-old students around the world. In 2018, a record 600,000 students from 79 nations took the test.

U.S. students scored slightly better in all three subjects. While statistically insignificant as a measure of improvement, the increase was enough to push the United States slightly above the OECD average in reading and science, while still falling below in math.  Their scores were similar to those of students in Australia, Germany, New Zealand, Sweden and the United Kingdom in at least two of these three subjects.

Once again, China (the provinces of Beijing, Shanghai, Jiangsu, and Zhejiang) and Singapore came out on top, ranking first and second, respectively, in all three subjects. Estonia, Canada, Finland, and Ireland rounded out the top five (see chart below).

In its report, OECD notes that, overall, the progress of participating nations has been sluggish over the past decade. For example, more than ten million students who took the test in 2018 "were not able to complete even the most basic reading tasks."

Despite ranking the 79 nations, OECD stresses that the results are not a competition - a frequent criticism of the test: "The goal of PISA is to provide useful information to educators and policy makers concerning the strengths and weaknesses of their country’s education system, the progress made over time, and opportunities for improvement."

In addition, social and economic conditions should always be considered when ranking countries.

According to the 2018 results, the 10 percent of the most socio-economically advantaged students outperformed their 10 percent most disadvantaged counterparts in reading by 141 score points, on average across OECD countries. 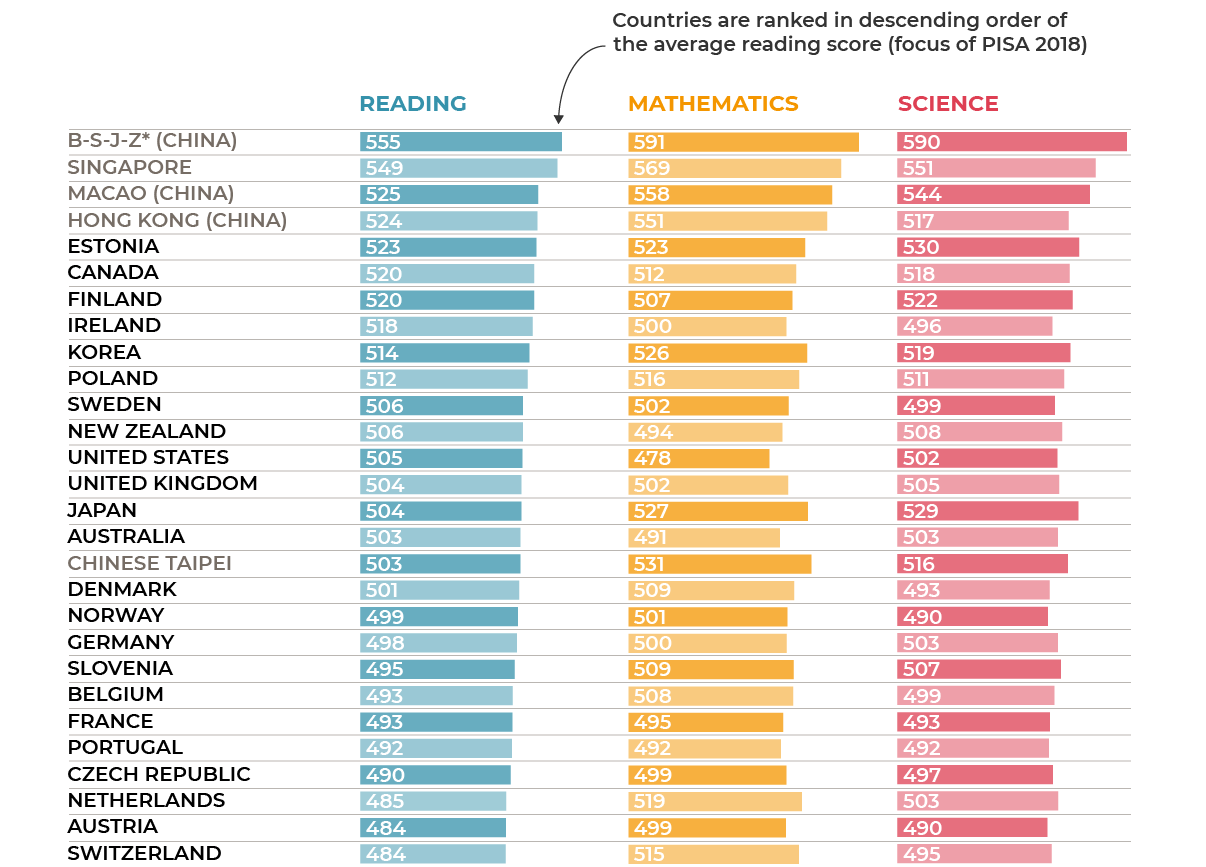 Still, many education leaders and policymakers in participating nations eagerly await PISA results because they hold them up as a reasonably accurate measure of how well their education systems are performing.

The data can be useful, said National Education Association President Lily Eskelsen García, but it's important to keep the results in perspective.

“These numbers are a single indicator of performance, but even given that, what we clearly see is that all the 'test-and-punish' reforms have actually hurt our most vulnerable students," she said. "Every teacher knows that test scores don’t measure a child's worth nor potential, and that no place in the world is the same as the next."

For example, as OECD report points out, the four Chinese regions' high-ranking, for example, doesn't mask the fact that they also have a long way to go in improving other measures of student success and well-being, including social and emotional outcomes.

Furthermore, many of the top-performing countries - Finland in particular - prioritize investment in the teaching profession and have rejected the privatization agenda that has eroded public schools in the United States and elsewhere.

“These top performing countries followed the same blueprint: they invested heavily in their students, educators, and schools regardless of socio-economic standing," Eskelsen García added. "These practices aren’t moonshots, a lesson which seems to be lost on Betsy DeVos and the current Administration."