Plight of the poor takes center stage at national forum 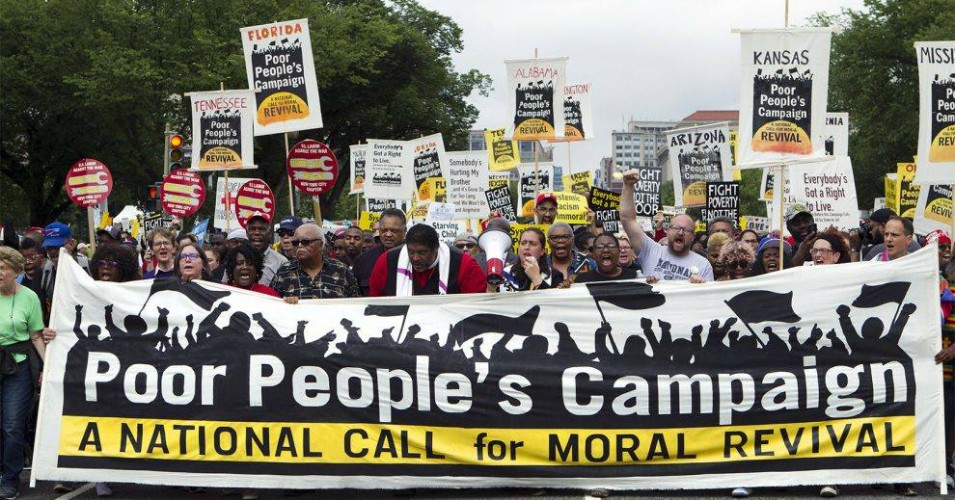 Teachers Keila Foster and Philimena Owona arrived at The Poor People’s Campaign forum at Trinity Washington University in Washington, D.C. to connect the dots between the lives of their students from Prince George’s County, Maryland, and what nine 2020 presidential candidates might say about education and other issues.

“I’m on the ground level of education and community affairs,” says Owona, who teaches at Maya Angelou French Immersion School in Temple Hills. “I’m looking to connect what is said here and how it might affect my students, their families, and the community in which we live.”

The three-day conference which started Monday was hosted by the Poor People's Campaign: A National Call for a Moral Revival, a year-old group led by the Rev. William Barber II and Rev. Liz Theoharis of the Kairos Center. It was broadcast online by MSNBC and moderated by national correspondent Joy Reid.

President Donald Trump was asked to attend but did not respond to the invitation, according to organizers. Former Housing and Urban Development Secretary Julian Castro was scheduled to attend but missed the event due to a cancelled flight.

The campaign is often described in media reports as a movement which addresses poverty and systemic racism while demanding federal and state living-wage laws, equity in education, the right to join a union, a single-payer health-care system, voting rights, and enforcement of environmental laws to maintain clean air and water.

“If students don’t have clean water, how can their bodies be hydrated so they can perform at their full potential,” says Keila Foster, who teaches at Highpoint High School in Beltsville.

“As educators, we are sometimes limited in how much we can do,” Owona says. “Framing the issues and electing pro-education legislators can make a big difference in the lives of our students.”

As educators we are on the frontlines of the issues of the day. Social justice is part of our work with students. We are sparking conversations with our students to bring about change.

The second day of the conference featured an array of workshops and tracks which examined, for example, “militarism and the war economy,” “ecological devastation,” policy and power-building,” and “organizing the dispossessed.” One of the aims of the campaign is to link movements that seem to be interconnected, such as racism, sexism, militarism, and classism.

“Today, we are seeing the re-segregation of high poverty schools,” said Barber, a Protestant minister and president of Repairers of the Breach, a nonprofit organization addressing moral and constitutional values. “We are here because the war on poverty did not die.”

The campaign takes its name from the original 1968 Poor People's Campaign, which was an effort to gain economic justice for poor people in the United States. The campaign was organized by Martin Luther King Jr. and the Southern Christian Leadership Conference.

Foster and Owona are members of the Prince George’s County Education Association (PGCEA).

“These are our activists,” said Theresa Mitchell Dudley, PGCEA president, who attended the event with several other members. “I want to hear the candidates address these issues so I can make an informed decision on who to support for president in 2020.”

Dudley is particularly focused on learning how the candidates plan to improve public schools for “all students.”

PGCEA is comprised of 10,500 members strong with a 95 percent penetration to include teachers, speech pathologists, counselors, librarians, and school psychologists.

“We just settled a big contract to restore missed steps for educators and class size issues,” Dudley added. “In Prince George’s County, about 60 percent of children live in poverty. This condition puts them at a higher risk of having adverse experiences as they grow and develop.”

At the forum, of which NEA was a sponsor, each candidate was asked a question by an impoverished American about how they would improve the lives of the poor. Candidates were also asked if they would support a presidential debate in 2020 that focused on poverty issues. All agreed they would.

What happens in our classrooms is a microcosm of society. We are on the frontlines. We need to be advocates for our profession and those who we teach.
–Ms. Jefferson from @PGCEA_PR #PPCMoralCongress@MSEAeducators @UniteThePoor pic.twitter.com/MZmiB5BmDl

At the event, campaign officials released a report on U.S. poverty: The Moral Budget: Everybody Has a Right to Live. The study finds that 43.5 percent of the nation — 140 million people — live in poverty, including 39 million children and 21 million people over age 65.

The report was submitted on the third day of the conference at a Capitol Hill hearing of the House Budget Committee where leaders of the Poor People’s Campaign testified.

“The statistics on poverty are jarring,” said Rep. John Yarmuth, committee chair. “The purpose of this hearing is to shine a light on the challenges Americans face in meeting their basic human needs.”

Over the next year and a half, the Poor People’s Campaign is planning to hold a series of town halls, trainings and voter-registration drives in an effort to mobilize Americans who do not typically vote in presidential elections. The group said the effort will culminate in the Mass Poor People’s Assembly and Moral March on Washington on June 20, 2020.