Poll: Parents Continue to Stand Beside Educators In Fight for Funding

A new poll illustrates how closely parents, educators, and the public are aligned behind the urgent need to reinvest in our schools. 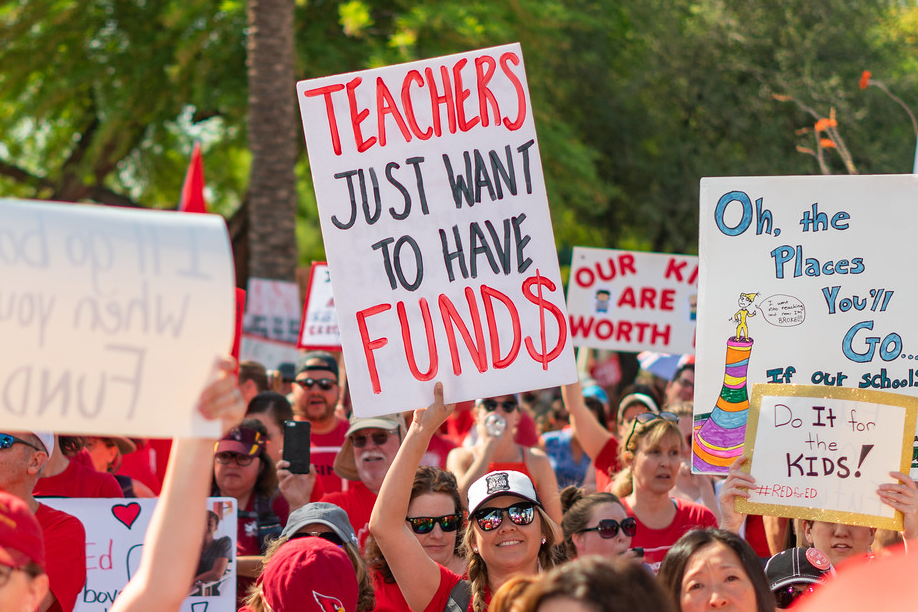 Almost eighteen months after educators ignited the #RedforEd movement to call for greater investment in our public schools, parents - and the general public - are unwavering in their support.

For the eighteenth consecutive year, adults surveyed in the PDK poll named inadequate funding as the most pressing problem facing U.S. public schools.

The PDK poll has been tracking public opinion on schools since 1969. For the first time in 18 years, the poll this year includes responses from educators.

While the #RedforEd movement has scored multiple victories in communities across the country - not only securing more education funding but also changing the national conversation around the future of public education - the movement is only getting started. Politicians now recognize that teachers and education support professionals are a force to be reckoned with, one that's getting ready to make an impact in 2020.

“Over the last several years, hundreds of thousands of NEA members and parents have stood together for the public schools our students deserve,” said NEA President Lily Eskelsen García. “And yet, while the #RedForEd movement has helped more students and educators get the support they need, today’s PDK poll should remind everyone that there is still so much more work to be done to correct the years of inadequate funding of our public schools.” 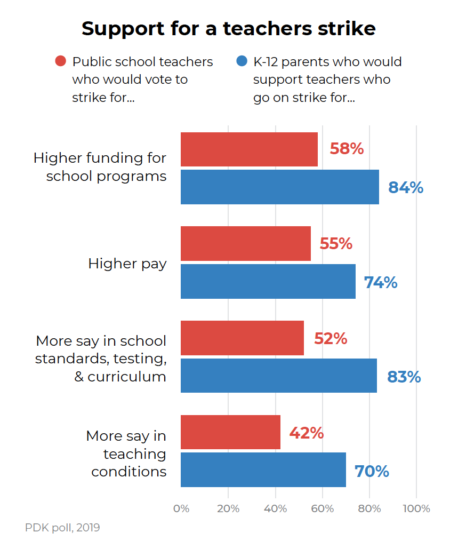 Still, as the poll results make clear, the majority of teachers remain frustrated and angry.

Sixty percent of teachers say they are unfairly paid, and 75 percent say schools in their communities are underfunded. Sixty-one percent of parents and 60 percentof all adults agree.

But as any educator will tell you, the importance of being paid close to what other college-educated professionals make is only part of the story. It's also about respect and support. According to the PDK poll, only 52 percent of teachers say their community values them.

The PDK poll found that inadequate pay, stress/burnout, and lack of respect are the top three reasons why teachers have considered leaving the profession over the past few years. Fifty-four percent of teachers say their schools are underfunded have thought about making this change, compared to the 39 percent who say their schools are adequately funded.

A recent city-by-city analysis by USA Today found that new teachers can't afford the median rent almost anywhere in the nation. Second, even third, jobs are commonplace. Add undue stress and lack of support to the mix and many educators find they cannot continue in a job they otherwise love.

“Low educator pay comes at a very high cost,” Eskelsen García said. “To recruit and retain talented teachers for the long haul we have to pay them what they’re worth. In the end, it’s students who pay the price for low teacher salaries.”

“They are the people who are with our kids day in and day out. They are rearing our children along with us. You wouldn’t want just anybody to be part of your village. Our school district rarely retains good teachers. Who would stay when they’re not being paid a livable wage?”

The 2019 PDK survey also took parents’ and the public's temperature on a number of controversial, although important, issues affecting public schools. Here are some of the findings: