Preparing the Next Generation of Educators for Leadership

Public education needs early career educators to begin advocating for their profession and their students. An NEA program is helping them find their voice.

Crosby Bromley, a physical education teacher in Salem-Keizer, Oregon, never really considered herself a “political” person. To her, the term generally conjured up conflict and power struggles.

“I’m a confident person, but I usually prefer to mediate and help people compromise and reach a solution," she explains. "But even doing that on a larger scale had always intimidated me."  Therefore, as an early career educator, the idea of getting actively involved in her local union, the Salem Keizer Education Association (SKEA), wasn't a top priority.

The perception - common among many younger educators - that the union or was focused primarily on struggles and brinkmanship, Bromley says, clouded her perception.

“Honestly, I really didn't understand all that unions do," she says.

Addressing these assumptions and misperceptions is a persistent challenge, says SKEA president Mindy Merritt. "Most people don't like being in that position of struggle. They tend to cringe. So as an association, we have to learn to understand the needs of early career educators, but also that we help them understand the power of collective voice."

It's a voice that, while often used to impact elections and legislation, also elevates classroom practice and social action activism.

Salem Keizer is Oregon's second largest school district and, like communities across the country, is seeing its teaching force transformed as retirements increase. SKEA has roughly 2300 members, and many are early career educators. Empowering these younger members and tapping into their leadership potential is a top priority for the association.

In North Carolina, where public education has been attacked on practically every front over the past decade, association leaders are determined to keep educators from exiting the profession.

"They're not sticking around like they used to," says Ronda Mays, president of the Forsyth County Association of Educators.  "Being able to attract and retain educators in our district is critical. How do we help our newer members succeed so they will want to stay?"

Mays and Merritt are part of a small but growing group of association leaders who have brought early career educators in their districts into a leadership training program created by the National Education Association (NEA) and the Consortium for Educational Change (CEC).

Merritt first heard about the Early Career Leadership Fellows (ECLF) program in 2015 at a meeting of the Teacher Union Reform Network, a network of more than 200 NEA and American Federation of Teachers union locals. At the conference, the first group, or co-hort, of fellows spoke about how the training the members received was already making a significant impact on their fledging careers.

"We listened to these young educators and were so impressed," recalls Merritt. "I just thought, 'Ok, we want in on this!'"

A group of early career educators from Salem Keizer participated in the 2016 ECLF program. After seeing the results from that year's program, Merritt didn't hesitate to invite another cohort to the 2017 training, which kicked off in October.

"We've seen an increase in activism and involvement in the local," Merritt says. "Our younger members are bringing fresh ideas to the table and are running for positions in the association at the local and state level. It really has been remarkable."

The ECLF program is tailor-made for a newer educator like Crosby Bromley, who was selected to participate in the 2017 co-hort from Salem Keizer. She's confident, passionate about education and her students and is ready and willing to, as she puts it, "step outside her comfort zone."

"I'm now really thinking about leadership," Bromley says. "I'm discovering what unions can do for us and vice versa. We can help change and move forward together."

A New Generation of Leaders

According to the National Center for Education Statistics, 1.56 million teachers, whether through retirement or attrition, will leave the profession over the next six years. Newer teachers are leaving the profession at higher rates than ever before. One in ten early career educators leave after the first year.

"The data consistently show us that a big issue is how much voice, how much say, do teachers have collectively in the school-wide decisions that affect their jobs? Are teachers treated as professionals? That’s a huge issue," says Richard Ingersoll of the University of Pennsylvania. Ingersoll says better recruitment strategies are important don't address the urgency of keeping young teachers in the classroom.

The National Education Association is committed to engaging and supporting educators as early as possible to stem the tide of departures and create a strong and sustainable teaching force. Long-term solutions are needed to keep educators in the profession by improving working conditions, increasing preparation and mentoring, and providing adequate resources that will enable them to do their jobs.

Achieving these goals depends on having strong educator leaders who will advocate for their profession and their students.

They're not sticking around like they used to. Being able to attract and retain educators in our district is critical. How do we help our newer members succeed so they will want to stay?" - Ronda Mays, president of the Forsyth County Association of Educators.

According to a 2014 report by the NEA, the Center for Teaching Quality and the National Board for Professional Teaching, "Teacher leadership is no longer optional. It's importance in student learning, teacher retention, school culture, school improvement, the creating od sound education policy, and productive and innovative teacher associations has been demonstrated by both research and practice."

Cultivating a new generation of leaders is the impetus behind the ECLF program, which has so far worked with approximately 200 early career educators, representing NEA local affiliates across twelve states. In addition NEA state affiliates in Illinois, Wisconsin, Ohio, Minnesota, Iowa, and Michigan have received a Great Public Schools Grant  to start their own state ECLF programs.

“NEA continues to create programs to support members all along the continuum – beginning with emerging teachers, who evolve into accomplished teachers, and ultimately become teacher leaders” said Andrea Prejean, Director of NEA Teacher Quality. “Emerging teachers participate in NEA’s Early Career Learning Labs. Working through problems of practice, new teachers are supported by accomplished teachers who act as mentors and coaches. NEA is especially excited to offer access to more than 100 micro-credentials to our members, in areas such as bullying, classroom management, supporting English Language Learners, and Creating Safe School Spaces for LGBTQ Students.”

Each year, the ECLF cohorts gather for a kick-off training, an intensive two-session that unwraps what it means to be in a union or association and what that represents to members, but also the students and communities they serve.

"The purpose [of ECLF training] is to help these new educators transition from fellows to true leadership," says Mary McDonald, Senior Director of Regional and National Work at CEC, who conducts the training sessions with CEC consultant and educator Ann Cummins-Bogan.

Central to the program are the "coaches," experienced educators who serve as a resource for the cohorts, guiding them through potential issues within the district and putting together a plan to address them as they emerge.

As an educator in the latter part of his career, Kurt Kneirem jumped at the chance to serve as a coach to the ECLF fellows from the Poudre school district in Colorado.

"Facilitating the training of the next generation of teacher leaders was a way I saw that I could give back in a substantial way," says Kneirem, a social studies teacher at Rocky Mountain High School.  "It also means giving me the chance to get to know some amazing young educators."

Learning About the Three Frames of Unionism

A focus of the ECLF training is an understanding of the three central tenants of "unionism": industrial unionism (bread and butter collective bargaining, labor/management issues), professional unionism (the collective voice to improve the practice of classroom teachers and other education professionals) and social justice unionism (advocacy for equity to help all children succeed).

In addition to tapping into any resource or mechanism that will help them succeed at their profession, younger educators gravitate heavily toward social justice. That traditional, industrial union model, on the other hand, doesn't resonate as strongly - at least initially.

Before becoming involved in ECLF and her local, Crosby Bromley wasn't aware of all the professional development opportunities in her district made possible by SKEA.

"The deeper I get, the more I'm learning about unionism beyond that industrial model. My number one priority is the students and that is the work of the union," explains Bromley.

"Of the three frames of unionism, that one didn't interest me as much," adds Alejandra Guererro Morales, a 2017 fellow from Salem Keizer. "But the training helped me and others understand the connections between the three. They're co-dependent." 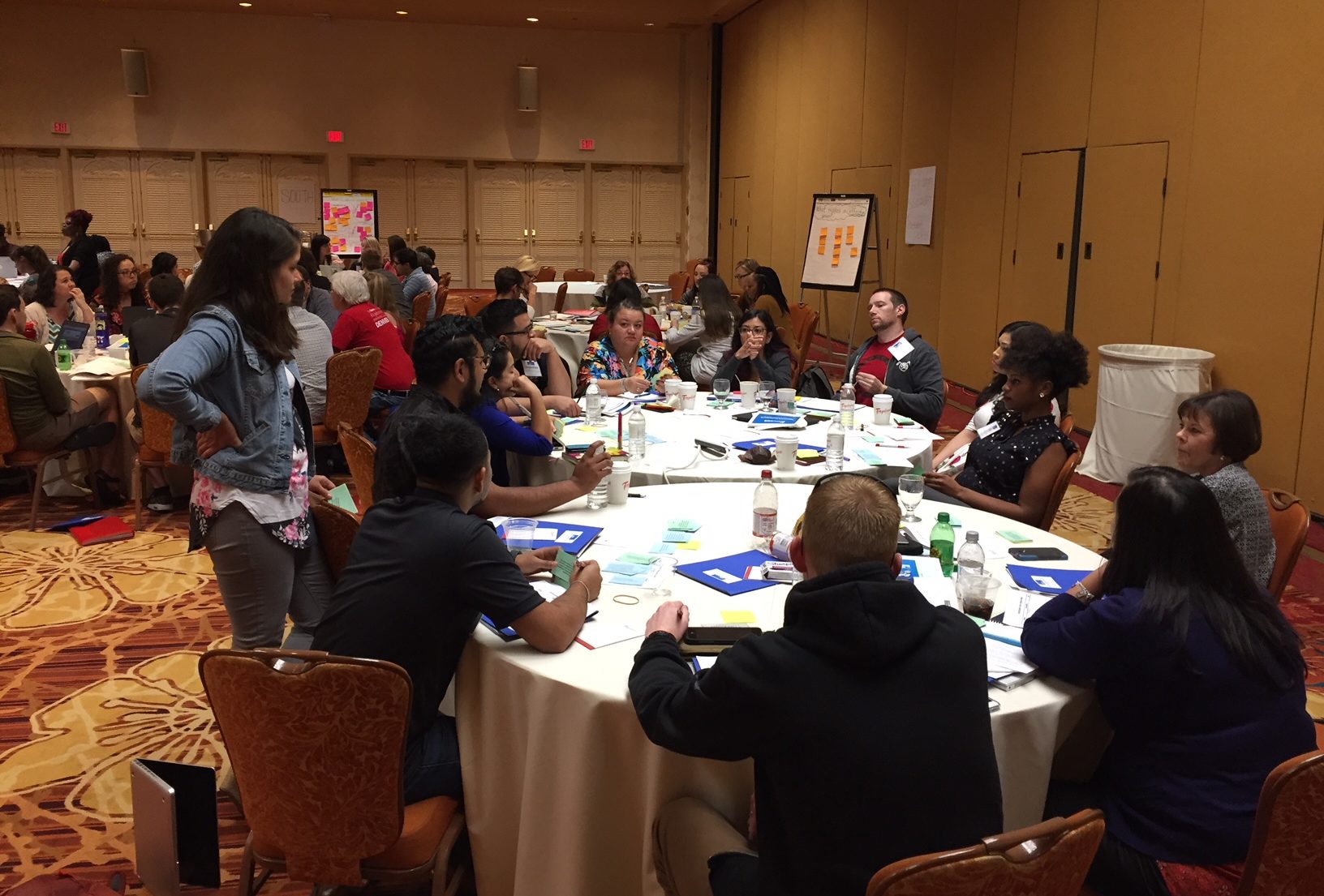 ECLF fellows from San Antonio during a two-day training session in October 2017.

Ronda Mays, president of the Forsyth Education Association, who attended the 2017 training with nine fellows from her district, says its unnecessary and counterproductive to confine "politics" to the shadows when communicating with early career educators.

"Politics is a part of education. There’s no separating it," Mays says. "But we have to stress to early career educators that it's more about issues. We can fight, lobby, advocate to improve public schools, but we have to it together."

It's an understanding that the co-horts will take with them as they elevate their voice in the district - and help their colleagues do the same.

After the initial training, each fellow is charged with reaching out to five other early career colleagues to have a series of one-on-one conversations with them about the realities of their work. The insights and ideas generated by these conversations are shared with the other 2017 cohorts at follow-up meetings.

"These new educators have tremendous insight," says Merritt. 'The ECLF program gives them that venue to share their voice. It provides a real sense of purpose because everybody at the table is important."

The fellows emerge from the two-day training armed with a lot of information. Some may feel a little overwhelmed but that's ok, says Kurt Kneirem.

"They were very excited to be part of the group. On the other hand, they left with lots of questions about the specifics of the program.  Both of these take-aways were positive, because it's then up to me and the other coaches to channel that excitement and help the group clarify their direction," he explains.

Alejandra Guererro  Morales is ready to take the next step in the journey.

"I'm really excited about reaching out to colleagues, taking this district-wide. The training was valuable but I think we're all ready to put it to work."