Milwaukee educators step up the pressure on lawmakers in the fight to keep public schools under public control. 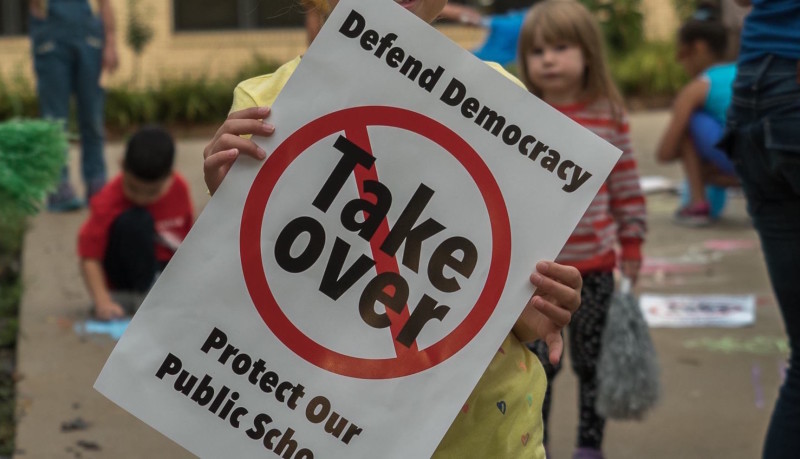 In late November, students, parents, educators, and community members in Milwaukee, Wis. took a step toward victory when Amy Mizialko, a special education teacher and vice president of the Milwaukee Teachers Education Association (MTEA), urged Chris Abele, the city’s county executive, to commit to only one school takeover—which he did! Mizialko relentlessly asked, "Will you say tonight that you're one and done?" (see video below) Abele plans to acquire one empty school building and convert it to a private Pre-K charter school. Mizialko wanted assurance that he would not take possession of other empty buildings and "bleed more population and dollars" from Milwaukee Public Schools (MPS).

"I'm not going to take away a school. I'll do whatever I can to try to help MPS," Abele said. Abele gave a firm "yes" to only taking one school.

The takeover plan was passed in July 2015 as part of the Wisconsin budget and mirrors similar efforts in Louisiana, Michigan, and Tennessee, which usurp local control as a way to transform struggling schools. Some of these strategies include charter conversion, indiscriminate staff and leadership removal, or school closures.

A recent report on school takeovers by the Annenberg Institute for School Reform at Brown University and the Southern Education Foundation stated that “These state takeover districts have failed to consistently improve student outcomes, and failed to engage (and invest) communities and educators in any kind of visionary transformation that is needed in our public schools. Without such investment, even initial academic results will falter.”

The Wisconsin law transfers control to the county executive’s handpicked commissioner, Dr. Demond Means, superintendent of Mequon-Thiensville, to be the sole decision maker over takeover schools instead of the elected school board. Means is charged with curriculum and personnel, as well as selecting one to three schools to convert into privately run charter or voucher schools for this school year. He also has the authority to identify up to five schools for takeover each year after.

If enough schools are taken over, the school district can become insolvent. “We’re reaching a tipping point. If more of our schools are chosen for privatization, MPS won’t exist in three to five years,” said Kim Shroeder, an elementary school teacher and president of MTEA, to Campaigns for America’s Future.

While Mizialko may have pressed Abele to commit to a “one and done” deal in a public forum, organizations like MTEA have been long working with a coalition to prevent this plan from taking root and spreading. Schools and Communities United represents more than 25 organizations, including MTEA, and work to defend and improve public schools. The coalition is comprised of community, educator, civic, student, labor, and religious organizations.

The group has organized thousands of people across the city to show support for public schools by staging “walk-ins,” which are scheduled before the start of the school day and before educators, parents, and students walked-in to their respective schools. Participants of walk-ins celebrated public schools and provided information about how takeovers would hurt students.

While the takeover plan passed this past summer—despite mounting opposition from the community—the fight is not over.

Groups continue to voice their disapproval, saying it offers no new resources or support for students; leaves many students without services; and eliminates democratic local control and disenfranchises communities.

Martha Treder, Angela Riley, and Angela Walker are parents of children who attend Milwaukee Public Schools (MPS) and reject the takeover plan. The trio penned an op-ed in The Milwaukee-Wisconsin Journal Sentinel saying, “Children living in poverty come to school hungry, cold and often ill-equipped to learn. This takeover does nothing to assist these children.” Special education students and English Language Learners stand to lose services, too.

The group instead proposed a community school model, which has seen much success in other cities, such as Cincinnati, Ohio. Here, the school district forged a partnership with the state, local taxpayers, and community allies to help create “Community Learning Centers.” These centers are in every school and are based on the needs of the individual neighborhood. The centers might offer after-care, English language classes, health care services, or arts programs. They serve parents and community residents, too.

Educators also have shown their frustration over the state of Milwaukee’s public schools. “When kids walked into Auer Avenue School 15 years ago [one of the schools considered for takeover], there was a full-time librarian, every day. There used to be full-time Physical Education, art and music teachers. We don’t have that anymore. So we don’t believe these are failing schools. We believe they’ve been failed,” said Mizialko to ThinkProgress in June.

The fight to keep Milwaukee public schools under public control will continue, says Schroeder. “Milwaukee is the birthplace of voucher programs, and our students and educators have paid the price for this unproven and misguided practice. We don’t need more experimental reforms and we’re not going without a fight—our students deserve better and the community schools model is a good way forward.”

The next Milwaukee walk-in is set for Feb. 17. Parents, educators, and students will gather in front of their schools before the day starts to picket in support of public education and community schools. Other cities, including Los Angeles, Seattle, Chicago, Green Bay, and Boston will join in support on the same day.