Pushed Out: The Injustice Black Girls Face in School

Black girls make up 16% of girls in U.S. public schools, but 42% of girls’ expulsions. What are the forces that have made these students targets?

“I think education is important, because nobody can take that from you,” a 16-year-old named Jennifer told Monique Morris, author of Pushout: The Criminalization of Black Girls in Schools. But Jennifer hadn’t attended school regularly for years. After being raped at age 12, pushed into prostitution, bounced around foster homes, and repeatedly suspended from school, her opportunity had been lost. This story of Jennifer’s “pushout” is the story of far too many Black girls in America. In her book, Morris, co-founder of the National Black Women’s Justice Institute, shares the voices and stories of these girls, and also offers specific policy recommendations and strategies for educators. Recently she talked to NEA Today about the need for educators to “lead with love.”

Let’s start with the numbers — Black girls make up 16 percent of girls in U.S. public schools, but 42 percent of girls’ expulsions and more than a third of girls’ school-based arrests. Lately we’ve seen some of those arrests in the news — I’m thinking of that child in South Carolina who was thrown across her classroom by a police officer because she wouldn’t give up her cell phone. What’s at work here? What are the forces that have made these girls targets in their schools and communities?

Monique Morris: There are zero tolerance policies in schools and school districts that have really removed the discretionary decision-making abilities of educators and administrators to respond to the core needs of students. And within this elevated climate of punishment, typical adolescent behavior, when exhibited by Black girls coming from communities under extreme surveillance, is very often misunderstood. Their actions are taken—they are misunderstood—as aggressive, even when they’re not. 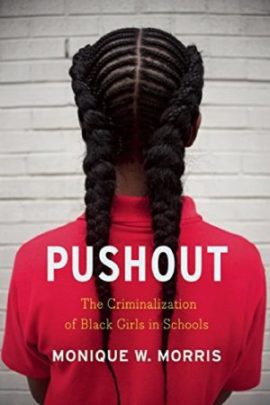 What I’ve sought to do in my work is deconstruct the historical legacy that misinforms our ability to really see Black girls, and see their trauma, and see the centrality of that trauma and how it shapes how educators and institutions interact with them. There are ways that Black girls are routinely over-policed, and there are ways that Black girls’ behaviors are read as a threat to safety, even if they’re really no more aggressive than their counterparts of other racial and ethnic groups. It results in them being cast as deviant and defiant, and being cast out of school, even when they’re expressing a desire to be educated.

How early in the lives of Black girls do these issues arise?

MM: Black girls are 20 percent of preschool girls, but 54 percent of the girls facing out-of-school suspensions in preschool. That number, and also the disparities around corporal punishment, are two points that show how schools are assessing threats among really young children. Those of us who have seen a 6-year-old throw a tantrum know they can throw a mean tantrum—but there are ways we can respond without pushing them out of school. What this says to me is that Black girls, from a very young age, are treated as disposable. What it also says is that we need to find ways to support them.

In some of our schools, NEA members are talking about implicit or unconscious biases, and how they affect student achievement. But this can be hard — and sometimes you’ll hear people say, oh but I’m not a racist! How do you move people beyond that self-denial?

MM: I appreciate that so many educators are doing that work—that hard work—of responding to their own implicit biases. It’s important for all of us to recognize that we all live with biases. It might play out deliberately—some might say ‘I’m not a racist’ and others might say ‘I’m not harboring internalized oppression’—but we all have to confront these internalized stereotypes, and how they might impact our work with young children. And I don’t believe the answer is to ‘treat everybody the same.’ Sometimes treating all kids the same isn’t what all kids need, and often when we try to construct something uniform we default to our own norms. What can help is better training for educators.

I also really believe that when educators commit themselves to learning and to teaching more than just the curriculum, when they find creative ways to connect with students, they can build relationships that are much greater. The young people who are most in crisis, who are experiencing pushout or on the verge of experiencing pushout, these are kids who are dealing with very real trauma. The centrality of this trauma can’t be overlooked. They’re just looking for somebody who cares. And the teacher who says I’m willing to teach more than the curriculum, to build out the resources, and to respond to students’ passions, are the most successful in connecting with children.

The vast majority of the girls I’ve talked to understood the value of learning and of education, and they wanted to pursue their educations. They just really didn’t know how to do it, and hadn’t built the relationships with teachers that would enable them to do that.

This summer at the NEA Representative Assembly, NEA members passed a policy statement on the school-to-prison pipeline, which calls for a multi-level approach to the issue, including better training for teachers in restorative practices and fewer school-based arrests and referrals. You’re also calling for comprehensive change — from state legislatures to the classroom down the hall. Can we talk about the breadth of change that needs to happen?

MM: Some of what advocates can do is move legislation, at the local, state and federal levels. Those conversations are happening with folks trying to eliminate exclusionary discipline through legislation.

At the school level, what can happen is educators can refuse to refer students to law enforcement, and instead use a more empathic mindset. When an educator uses an empathic mindset, they can be single-handedly responsible for reducing suspension rates for Black and Latino girls by as much as 75 percent.

One teacher can make a difference. And not every teacher has to be that teacher. But when a child has at least one adult on campus that they can connect with, their likelihood of success increases and their likelihood of suspension decreases. In our pilot educational reentry program in Alameda County, Calif., we actually assigned students to adults, and we made sure every student has an adult who commits to say, ‘I will get to know your name, I will pronounce it correctly, and I will praise you. I will care about you.’

You just mentioned an ‘empathic mindset’ — tell us more about that.

MM: It’s really about leading with love. When I talk to people about this, I often say the most radical recommendation I have is that educators lead with love, instead of punishment. The empathic mindset allows for the educator to see beyond a student’s actions, and to develop strategies to connect with students rather than just say this kid needs to get out of my classroom. The emphasis is: this kid has a need and how can I meet it? How can I understand them as a real person?

“Schools must be safe and welcoming for all students, discriminatory toward none, and focused on educational practices that reach the whole child and disciplinary policies that emphasize prevention and rehabilitation over punishment” - from NEA’s policy statement on Discipline and the School-to-Prison-Pipeline

My husband is a math teacher in a high school in a challenging community. One day when he was teaching, a student kept banging on the desk, making beats. He asked him to stop, but the kid kept going on and on, and finally my husband walked over and started rhyming his math lesson to the rhythms. He was able to turn a moment that could have been seen as disruptive into an opportunity to create community, and then said, okay, out of your system? Let’s move on. Teachers who are able to bring humor, to bring art, to bring the realization that kids learn in different ways, are helping to interrupt school-to-confinement pathways.

Something like 10 percent of all public school teachers are Black women. Do you think it’s likely we would see fewer Black girls pushed out of school if they had teachers who looked more like them?

MM: Anyone can teach and lead with love. Any child can be taught. There has to be a certain mindset and commitment to unlearning the bigotry that all of us in this country are primed to accept, and to be participants in. If we’re to be responsible for shaping the minds of the future, we have to actively work to control this bigotry. Every girl I’ve talked to understood they could have a connection with any teacher—they don’t care if you’re White or Black or Asian or Latino or Indigenous or mixed race—they just want to know that you care about them. It’s not just a function of being from a specific racial group, it’s about the work you’re doing, to represent your best self in your work, and to establish relationships with people in a way that reflects their core humanity.

One last question, in the book, you use the personal stories of girls from around the country to illustrate the victimization of Black girls, including transgendered girls. Is there any one of those girls whose story still lingers in your mind? Who you wish all teachers could meet and get to know?

MM: Jennifer really stands out to me—that’s why I close the book with her. I think having been raped at 12, put out on the street at 13, bouncing around foster homes, being a teen mom—she’s reflective of almost every risk factor of kids experiencing pushout. And every system failed her. All the adults failed her. They didn’t see her trauma. They didn’t respond to her exploitation, in fact they further exacerbated her exploitation. Sometimes people are like, is this a real person? It’s all her story. It’s extreme, but it’s representative of the things that make kids so vulnerable. She is one who said, “I want an education, I want to do better for my kid. But who will see me now?” I want readers and educators to understand that many kids are coming from extreme conditions, from trauma, from sexual assaults… when we look at kids who are truant, who present with behavioral issues, we should look at them as having had trauma, and not just being “problem kids.”

As an educator, and as somebody who believes in educators, I’m putting a lot of responsibility on schools—because I know what we can do and I believe in what we can do! I also know we can’t do it alone. It takes key partnerships. Schools are often absent from discussions about juvenile legal system reform, about prevention, and to me that makes no sense. When we start to talk about who should be in the room to address these big issues, I’m hoping we start to see more educators in that place because they play a vital protective role in this work.