Charter schools are among the most segregated in the nation. Experts say the justifications offered by many charter leaders are troubling and undermine the promise of equal opportunity for every student.

At the Milwaukee Math and Science Academy, more than 98 percent of the 335 students are African-American and nearly all qualify for free or reduced-price lunch. (AP Photo/Carrie Antlfinger)

In December 2017, the Associated Press conducted an analysis of charter school enrollment nationwide and found that the schools were among the most racially segregated in the nation.

The numbers were troubling, if not particularly surprising, to anyone who recognizes that high levels of racial and economic segregation is systematically linked to wide gaps in educational opportunity and achievement.

“Desegregation works. Nothing else does,” Daniel Shulman, a Minnesota civil rights attorney told AP. “There is no amount of money you can put into a segregated school that is going to make it equal.”

But for others, the latest bulletin on how segregation is becoming more entrenched in America's schools warranted little more than a collective shrug of indifference. “I think a lot of people have given up on integrating our schools,” says Andre Perry, David M. Rubenstein Fellow in the Metropolitan Policy Program at the Brookings Institution.

A national spotlight on the racial isolation of many of its students is just the latest setback for the sector. The more people have learned about poorly managed, unaccountable schools with at best mixed academic records - not to mention the network of anti-union billionaires and for-profit education companies that are fueling much of the expansion - the more charter schools' popularity has declined.

No surprise then that the AP analysis stung the sector. Charter leaders immediately coordinated a swift and indignant response, arguing that they were being blamed for segregation. Furthermore, critics were not recognizing success stories or acknowledging parents' right in making these decisions for their children.

In other words, “choice” trumps everything. 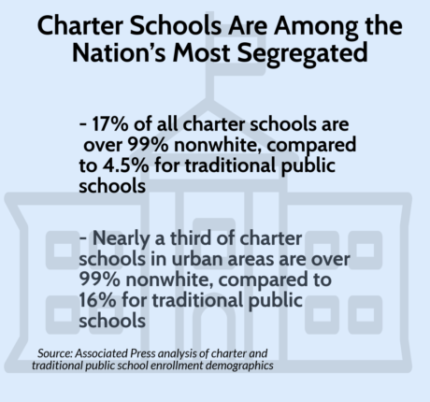 No one is holding charter schools responsible for the the return of Civil Right-era levels of segregation. Clearly, decades of decisions by conservative courts provided legal cover for communities to abandon desegregation efforts that were put in place following Brown v. Board of Education.

At the same time, the racial isolation in many charter schools is undeniable. Because its numbers continue to grow,  the sector is exacerbating the problem nationally.

A 2011 analysis by researchers at the University of Pennsylvania and the University of California found that charter schools are more racially isolated than traditional public schools in virtually every state and large metropolitan areas.

“As charters represent an increasing share of our public schools, they influence the level of segregation experienced by all of our nation’s school-aged children,” the report stated.

“It's disheartening that you would have an entire sector say 'Integrating students - that's not our business,'” says Perry. "What they don't realize is that it is all of our business,” he says.

“Business" is the operative term for the charter sector because its expansion is fueled by a very corporate, market-driven approach. Indeed, the schools that are most segregated tend to be those that are run by private companies and those that target specific communities of color.

It didn't necessarily have to be this way, says Perry. “Charters generally are not bound to geographic zones. So we should have seen cooperation and collaboration between these schools, traditional public schools, and districts in using them to break down segregated systems. Instead, charter schools just go where the students are.”

The result is almost unfettered expansion. While the enrollment numbers are impressive, they can't disguise middling academic gains, enormous costs to school districts, and highly concentrated segregation. And yet, lawmakers in every state continue to champion charter schools without demanding proper accountability, even as they drain scarce resources from traditional public schools.

There is nothing more infuriating than hearing #charterschool advocates say/write how #integration is impossible. The public schools must go beyond market goals. How about dealing with educational and social goals like they are one in the same - they are.

The charter sector isn't merely an innocent bystander as school resegregation worsens. A new report by the UCLA Civil Rights Project, co-written with researchers at the University of North Carolina (UNC), makes the case that charter schools in Charlotte and Mecklenburg County are "directly and indirectly undermining” district efforts to redesign student assignment boundaries to break up high concentrations of racial segregation.

In Mecklenburg County, the majority of charter schools, far from serving students in high-poverty areas, are located in suburban areas. According to the report, many parents are using the schools as a political cudgel to protect the status quo:

“The proliferation of charters in Mecklenburg County served as grist for the political activism of suburban parents who threatened a middle-class exodus from CMS to the charter sector if new assignment boundaries did not honor their current neighborhood school assignments. These threats indirectly undermined policy actors' initial willingness to act boldly and decisively in revamping pupil assignments to curb segregation.”

Long ago, Charlotte-Mecklenburg schools were the "nation's bellwether for successful desegregation," said Roslyn Arlin Mickelson, professor of Sociology at UNC.

The New 'Separate But Equal'?

As charter schools exacerbate resegregation trends, their advocates often resort to justifications that, to many ears, echo those heard during the "separate but equal" era - that integration is not necessary to meet the academic needs of children.

Furthermore, the argument goes, if parents choose to send their son or daughter to a charter school that is deeply segregated but academically successful, who are we to question that decision? High-performing charters in low-income communities do exist after all.

It's a point that tends to get oversold, says Preston C. Green, professor of urban education at the University of Connecticut. Several “schools of excellence” emerged during the separate but equal era that were able to overcome the obstacles of segregation and inequitable funding to achieve impressive academic records.

"A significant characteristic of those schools was that schools and communities had a shared sense of duty," explains Green. “People today think they can overcome these challenegs and create successful schools as well. But we're not taking seriously the dangers that privatization creates."

In a new paper looking at the charter sector in California, Green and Joseph Oluwole, associate professor of educational leadership at Montclair State University, examine how the private entities that are fueling charter school expansion in the state are essentially robbing traditional schools in the neighborhood from state funding and resources.

While modern day versions in the form of charter schools are indeed popping up in some black and Latino communities, the lack of regulation and oversight will have devastating consequences.

“If these outside organizations are allowed to develop charter schools without any restrictions, they may create a parallel system of schools that drain the resources from the traditional school systems that serve black and Latino communities, which are already underfunded," Green explains. “This scenario of dueling school systems could create a situation in these communities that would be even worse than the infamous Plessy v. Ferguson decision.”

In short, separate but equal wasn’t possible more than 60 years ago, and it's even less possible today.

Ultimately, says Andre Perry, many charter school operators seem content to experiment with students' lives - instead of helping to break down the segregated state of our schools.

“Segregation is the source of inequality in America. To dismiss it is to accept structural inequality and the status quo.”