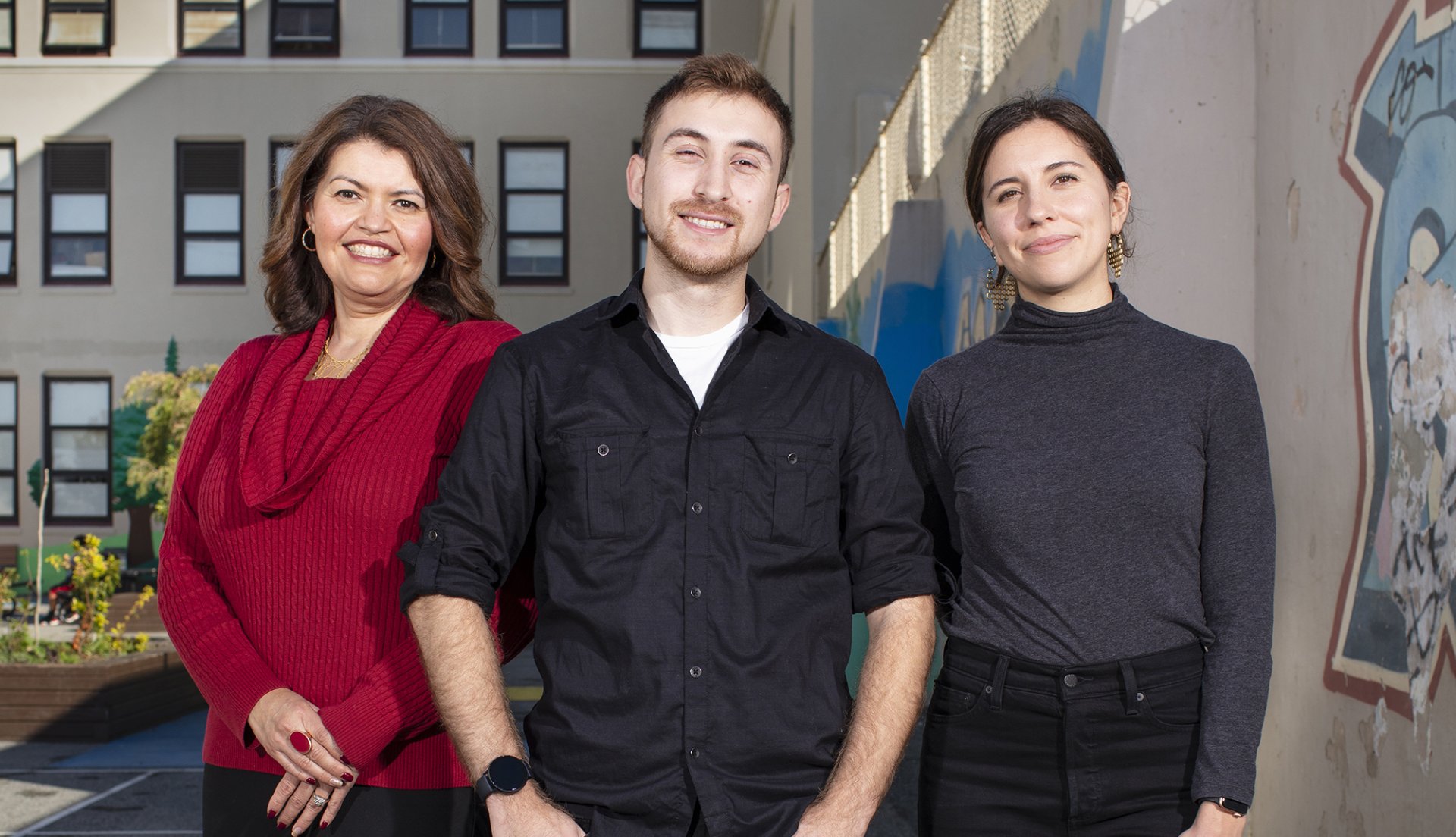 Growing up in south central Los Angeles, Jaime Vazquez says he was poor his entire life until he started his career in education. But that wouldn’t have been possible without a teacher residency program that offered him a stipend to help pay for rent and food as well as tuition assistance – often the biggest barrier to college for students of color.

SFUTR residents spend a full year with one class and one mentor teacher, immersing themselves in the classroom culture, building relationships and making deeper connections than typically possible with shorter placements.

In the 2015-2106 academic year, there were about 50 residency programs nationwide, and there are estimates that the number has grown by 75 percent since then, though there is no actual data yet. The US Department of Education released an RFP in July 2021 to gather the data and statistics on teacher residency programs as they expand across the country. In California, for example, there is $350 million in funding for competitive grants to expand, strengthen, improve access to, or create teacher residency programs.

Much like a doctor resident training in a hospital by following an attending physician, teacher residents learn from actual classroom experiences, not those they hear about in lectures or text books.

From Resident to Attending

The idea behind teacher residencies is that they offer intensive support to teachers throughout the beginning of their journey as educators, which helps reduce the churn so often seen within the first five years when teachers leave because they feel overwhelmed and isolated.

Across teacher residency programs nationally, 45% of residents in 2015–16 were people of color. This proportion is more than double the national average of teachers of color entering the field, which is 19%.

In addition to attracting a more diverse workforce, residencies aim to staff high-need schools and subject areas. Nationally, 13% of residency graduates in 2015–16 taught in mathematics, science, or technology fields, and 32% taught English language learners and/or students with special needs.

Cecilia Frisardi is graduate of the SFUTR program and is now in her third year teaching eighth grade science at Aptos Middle School in San Francisco, California, a position she loves and has no intention of leaving. She says it’s her calling, but she admits she wasn’t always sure she’d be a teacher.

Frisardi studied environmental conservation and wanted to work as a field biologist, working outdoors with plants and animals.

“But those jobs are hard to come by, and they’re often temporary and seasonal and paid hourly,” she says. “I wanted a reliable career with health insurance. I needed to support myself.”

“In one year, with a stipend and tuition assistance, I’d have a master’s degree and teaching certification and a guaranteed job in a school,” she says.

During that year as a resident in SFUTR, she taught in the same class with same mentor teacher – called a cooperating teacher, or CT -- every day from the week before students begin the school year to the last school day, along with a university mentor. When she got her first teaching job in the district, SFUTR provided her with a teaching coach for the first two years on the job.

Now that she’s in her third year, Frisardi has a resident of her own – Jaime Vazquez.

As a CT with SFUTR, she’s learning how best to mentor him and partner with him in her classroom through ongoing CT training.

“It was kind of a trip to go from being new to the game to having a student resident,” she says.

With SFUTR, residents complete a year-long apprenticeship teaching alongside an expert teacher in a high-needs school, while taking courses in the afternoons and evenings three to four days a week that are integrated with their clinical placement. The residents come together once a week for additional coursework taught by SFUTR and SFUSD leaders on topics relevant to district teachers, including implementing restorative justice practices and developing trauma-informed classrooms.

Around the country, teacher residency programs are emerging as a model to significantly improve the readiness of candidates when entering the profession. They offer pedagogy coursework and a full year or two of clinical practice alongside a qualified mentoring teacher.

How Does a Residency Work?

Rather than for a semester like more traditional student teaching programs, candidates are embedded in classrooms for at least one full academic year.

Residents engage in experiences that deepen their understanding of how race, culture, poverty, and other factors impact students’ needs and their own perceptions and beliefs.

They deepen their awareness of bias, both systemic and that which results from their own life experiences and how, through collaboration and reflection, mitigate personal bias and to eradicate inequities within the system.

University coursework closely aligns with the needs and challenges of the residency placement.

Networks of collaboration are created and fostered through the program and beyond, helping new teachers feel supported before day one and well into their first years in the classroom.

Candidates receive financial support through grants, stipends, or salaries during clinical residency. This lifts a common barrier for potential educators and attracts a much more diverse applicant pool.

After being furloughed as an assistant manager of a movie theater during the pandemic, Luke Zauner decided to pursue a graduate-level teaching degree. His advisor at the State University of New York (SUNY) Plattsburg told him about Classroom Academy, a teacher residency program launched with an NEA grant for graduate students at in SUNY Plattsburgh, SUNY Empire, or Sage Colleges, that places residents in districts throughout the upstate New York region.

Now he’s in his first year with Classroom Academy as a resident social studies teacher with his “attending” teacher Julianna Vrooman at Schenectady High School.

“What attracted me besides the stipend (Zauner earns a $22,000 yearly stipend plus $5,000 a year in tuition assistance) was the real-world, hands on experience I’d get from two years in a classroom,” Zauner says. “I was comfortable that I’d become an effective new teacher, not as anxious or uncertain as I’d be without that time spent with students.”

At the high school, Zauner is working with a diverse population of students, which he says has been eye-opening for him and offers lessons that wouldn’t be possible sitting in a college class or reading a text book.

“There are a lot of things the kids have to deal with, things that are much different than what I faced where and when I grew up,” he says. “Having an attending teacher help explain the context and the reasons some kids act the way they do has deepened my understanding of the challenges and what I can do to connect and help.”

Esther Jaramillo-Woo, Director of Clinical Education at SFUTR, says the best residencies are founded on social justice principles so that new teachers can learn from day one what it means to create educational justice. At SFUTR, cooperating teachers, coaches, and professors name and emphasize equity work in all aspects of the residency.

“We are talking about implicit bias, what it means to be anti-racist, how to create culturally competent curriculum, and how do you, as an individual teacher, need to be self-reflective and change and evolve,” she says.

Teacher residency programs are just as intentional about community building.

“Teaching can be very isolating but our residents form tight cohorts and rely on each other,” Woo says. “But they also see how critical it is to build close relationships with students, which can’t be done as effectively without spending more than a semester with them.”

Residents learn that social and emotional learning, based on relationships, is the foundation for engaging students in rigorous curriculum.

“It’s all about relationships, which is why I’m so grateful for SFUTR,” says Frisardi.

Rather than simply observing, she says, residents really jump into the classroom for the entire arc of the school year, while also meeting and collaborating with educators from throughout the district.

“I have so much knowledge of the different schools and their student populations, of our city, and about the craft of teaching,” she says. “SFUTR is very community driven. It’s grounded in it.”

It is that community foundation that drew Jaime Vazquez to the program.

“I knew I wanted to work in a district that focuses on community diversity, inclusion, and social justice, especially during these politically tumultuous times,” he says. “SFUTR has given me the knowledge of how our school community has been negatively impacted by policies like redlining. That knowledge is going to help me fight for my kids and I know my district is going to back me up.”